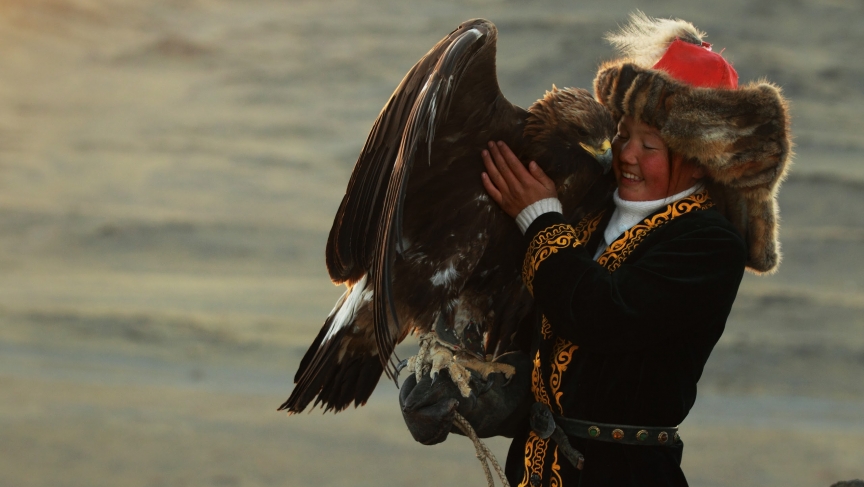 Ashol-Pan is a young huntress in Mongolia.

She is probably Mongolia's only apprentice eagle huntress.

Recently photographer Asher Svidensky got to see her in action, something that he describes as an "amazing" experience.

The Kazakhs live in the Altai mountain range in western Mongolia and it's normally the men who hunt, using golden eagles.

Every family develops its own way of hunting. But in general, says Svidensky, they work in teams.

"It's believed that there are 1,500 ways to train eagles to hunt. The system is pretty simple, one hunter goes on top of the mountain and another one scares the animal below it. Then as soon as the animal runs, the eagle runs right after it," he says.

The eagle, Svidensky explains, wouldn't pick up the animal, rather, catch and hold it down until the hunter reaches it.

Traditionally, hunting has been a male occupation in Mongolia. But Ashol-Pan is breaking that tradition.

"Seeing her hunt was unreal," he describes. "You have this hunter who has an amazing weapon, the eagle, and and they go on top of a snowy mountain, and as a photographer, every time you see that, you feel like you're in a story or a legend."

Going to Mongolia, Svidensky's mission wasn't to find the country's only female eagle huntress. Rather, he says, it was to learn more about eagle hunting as a tradition in Mongolia.

He says he is worried that hunting would lose its authenticity and become more of a show to attract tourists.

As for Ashol-Pan, Svidensky says, her father is pleased that she has taken up hunting.

He says she is part of a generation that will decide the future of Mongolia and the tradition of eagle hunting.