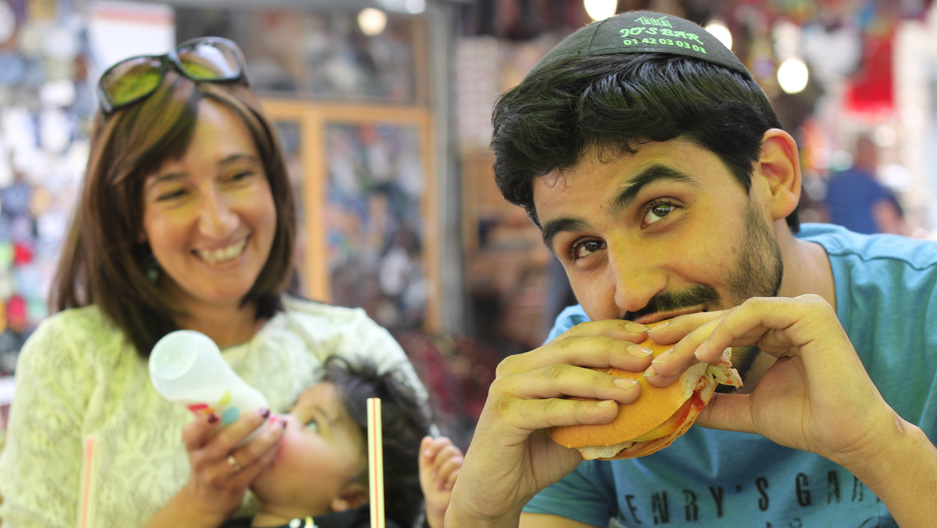 A French tourist eats a kosher McDonalds hamburger with a potato-starch bun in downtown Jerusalem.

For Jews who observe the weeklong Passover holiday, this week can be hard on the palate.

As the biblical exodus story goes, the Israelites were in such a hurry to leave Egypt, they couldn’t wait for their bread to rise. For Passover, the devout put themselves in the Israelites’ shoes, and stay away from bread, leavened products and foods with yeast.

Secular Israelis who crave bread travel abroad in droves, replaced by Jews from around the world who fly to Israel for the Passover atmosphere.

In recent years, restaurants have been catering more to Passover-observant Jews by preparing imitation bread products.

Walk into an eatery in Jerusalem this week and at first glance, you might almost forget that it’s Passover.

The secret ingredient in the pizza is potato starch. I tasted a slice; it was like a really deep dish pizza.

You can taste a trace of the potato starch, but with the mushrooms, olives, cheese and tomato sauce, it’s not bad.

It’s surprising, because imitation pizza by definition should not taste good; pizza is pizza.

The same goes for imitation crepes. The ice cream parlor across the street served French crepes that were kosher for Passover, made of potato starch and eggs instead of the usual flour batter.

“It’s better than the crepe that we have usually,” said Asaf, the owner. “I wait for it all year. It’s harder to make because it sticks, but it’s the best thing. It tastes better…maybe because of the potato powder.”

I tried one. It was actually tasty.

At first sight, these faux foods do not look appetizing. One shwarma joint downtown served meat in pita wraps made of soy and corn starch. It was not to my liking, but the place was packed with hungry customers.

I asked the owner if his pita wraps defeat the purpose of Passover – if you feel like you’re eating bread when you’re not supposed to be eating bread.

“You’re right, but on (Passover), you want to eat,” owner Eli Azulai said.

People seem to crave bread this week more than any other week.

For Jewish tourists who observe the holiday, the growing trend of fake bread is especially exciting. Where else in the world could you find a McDonalds that serves kosher hamburgers on a potato-starch bun for Passover?

At a McDonalds in downtown Jerusalem, Daniel and his wife and kids, visiting from the Upper West Side of Manhattan, were eating burgers with potato starch buns.

“The bun leaves a little bit to be desired,” Daniel said, “But the beef burger is very good.”

Mom and the kids ate the burgers and only nibbled at the buns. But they were still satisfied customers.

One upscale hotel in Jerusalem understood the purchasing power of American Jewish tourists on Passover. This year the Inbal Hotel announced it had concocted a recipe for Kosher for Passover bagels.

The chef said he mixed water, matzah flour, oil, eggs, and salt, and experimented with boiling the bagels until they came out the way he liked.

I gave it a try. It didn’t taste like a normal bagel, but the generous helping of cream cheese and lox did the job.

Observant Jews aren’t the only ones in Israel tickled by all the breadless and wheat-less food this week. Passover is a bonanza for Israelis with gluten allergies.

One Israeli whose daughters have celiac disease said Israeli chocolate factories this time of year manufacture kosher for Passover chocolate with no traces of gluten.

So, mom stocked up. She bought close to 100 chocolate bars.