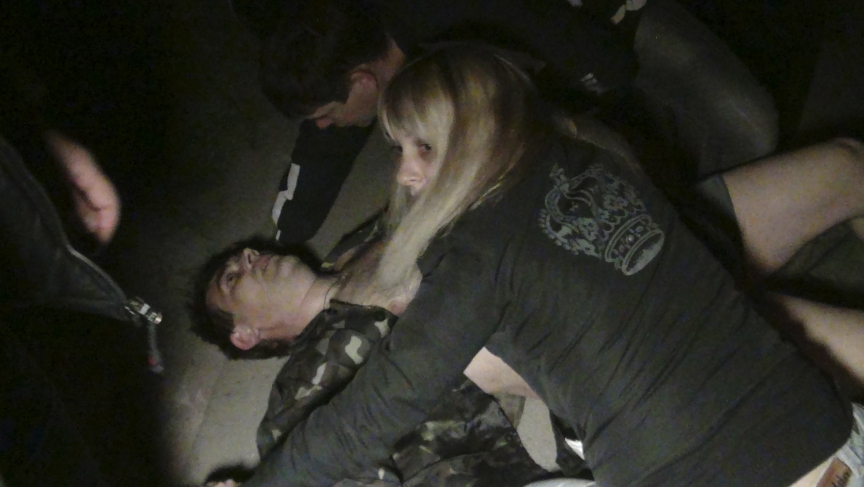 People surround a man injured during pro-Russian protests near a Ukrainian military base in Mariupol.

Ukraine continues to teeter on the brink. Russia’s President Vladimir Putin says the country is “staring into an abyss.”

Pro-Russian militants – no one is yet calling them rebels – have seized control of about 10 towns and cities in eastern Ukraine over the past week. Most of these towns are in the province of Donetsk.

On Wednesday, the Ukrainian military launched an operation to dislodge the rebels in two towns: Kramotorsk and Slovyansk. It ended in a humiliating fiasco.

The details are still unclear, but the troops were disarmed and sent packing without violence. One column lost their six armored personnel carriers and the men were sent home in dingy buses.

Another column with more than a dozen APCs were allowed to return in their vehicles after surrendering the magazines and firing pins from their weapons.

One of the columns was swarmed with civilians, including many older women. That crowd of civilians allowed professional-looking gunmen to approach and overwhelm the Ukrainian troops.

BBC correspondent David Stern says it’s impossible to know who these gunmen are. Ukraine says Russian forces are operating in the region, a charge vehemently denied by Moscow. Stern says “you can’t just walk up and ask to see their passports.”

But he adds that one of his colleagues did manage to ask a couple of these guys for the name of the village where they were standing. The men were stumped. “That doesn’t prove they’re from Russia – ‘tourists’ as they’re known – but it does prove they are from somewhere else.”

The farce however turned to tragedy Wednesday night. Ukraine says a pro-Russian mob tried to storm a National Guard base in the important port city of Mariupol. The Ukrainians say the mob attacked with Molotov cocktails and other weapons, so the troops responded with lethal force.

Three protesters died, according to Kiev. Thirteen were wounded and 63 ‘captured.’

The National Guard is a new volunteer force set up since the revolution in February chased out Ukraine’s pro-Russian president, Viktor Yanukovych. It includes many of the hard men who confronted Yanukovych’s security forces in Kiev’s Maidan protests.

The situation throughout the Donetsk region remains very tense. David Stern says it “could explode at any moment. This has been an extremely unpredictable story.”