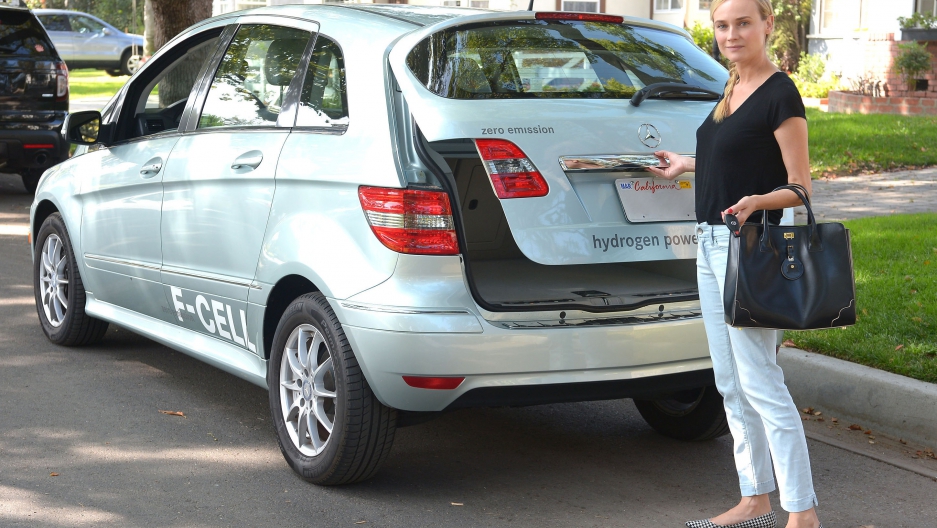 In a 1992 prototype, the fuel cell takes up the entire cargo area of a delivery van. Across the room, today's model — now merely the size of an average television set — is displayed in front of a neon-lit outline of a compact passenger car.

This “zero emission” engine, it appears, is ready for prime time.

With the aid of government spending and joint efforts by Ford and Nissan, Daimler — Mercedes’s parent corporation — aims to start selling hydrogen-fueled cars to the public as early as 2017.

If they take off, the biggest impact may be felt not in the car industry but in wind energy. Experts say a large commercial market could enable green energy producers to use their excess power to make clean hydrogen instead of storing it in costly batteries.

To meet Europe's aggressive targets for emissions reductions, Daimler is developing hybrids and electric cars, too. But although hydrogen-powered cars have been slower to hit the market, their potential benefit to the wind-power industry means they may become even bigger in Germany, says Christian Mohrdieck, director of Daimler's fuel cell program.

“We’re very sure we can achieve a product cost level which is competitive [with today's hybrid cars]," he says. “But to get there, we still need to work very intensively on the business side.”

The selling points for consumers are strong.

Unlike hybrids, hydrogen-fueled cars are truly “zero emission” vehicles, powered by a chemical reaction with water as its only by-product. And unlike plug-in electrics, hydrogen-powered cars have the same range as those running on gasoline or diesel — and can be refueled just as quickly.

That doesn’t mean the going will be easy.

Expensive platinum components hydrogen cars require mean it will be challenging to bring their cost below $100,000.

Moreover, while drivers of hybrids can refuel at ordinary gas stations and battery-powered car owners can plug them in at home, hydrogen cars will require a network of special fueling stations.

Prominent critics such as Elon Musk, founder of the burgeoning electric car manufacturer Tesla, joke that hydrogen is the fuel of the future — and always will be.

“The fuel cell is so bulls**t,” he told employees at the launch of a new service center for his plug-in sports cars in Germany last year.

“It's suitable for the after-stage of rockets, but not for cars.”

In 2012, Germany's Transportation Ministry, Daimler and several other companies agreed to finance a network of 50 refueling stations across the country by 2015.

In September, Air Liquide, Daimler, Linde, OMV, Shell and Total unveiled plans to expand that network to some 400 stations by 2023, with the first 100 in place in time for Daimler's commercial launch.

Klaus Bonhoff, who heads Germany's National Organization for Hydrogen and Fuel Cell Technology, says that would be enough to pass the industry’s first major test.

“In order to sell the first vehicles that will show up in the showrooms, you have to give the customer a certain gut feeling that he is able to refuel the vehicle he's about to buy,” he said in a telephone interview.

There’s another important factor at play.

In Germany, where an aggressive shift to green energy production known as “Energiewende,” or “energy transition,” has created a booming wind-energy industry, the impact could reach far beyond the automotive business.

Unlike conventional power plants, the output of wind and solar energy plants fluctuates dramatically — so much so that Germany's many wind-power companies sometimes produce as much as four times the amount of energy being consumed, which destabilizes the grid.

To offload and store that excess power, wind producers currently use costly batteries or pump water uphill, from where it can be allowed to flow down again to produce hydroelectric power. Neither solution is very efficient.

The commercialization of hydrogen-fueled cars would allow them instead to use excess wind energy for producing hydrogen — which is made by splitting water molecules into hydrogen and oxygen — and tap a lucrative new market.

More from GlobalPost: Ukraine’s revolution isn’t over yet

That's where hydrogen's infrastructure hurdle may turn out to be a surprise advantage.

It’s still unclear how businesses can make a profit from plug-in car charging stations, which take six hours to charge a car. Hydrogen stations, in contrast, would operate on much the same model as existing conventional pumps, making the wind-to-hydrogen business not so different from today's petroleum-to-gasoline supply chain.

That, Bonhoff says, would enable the industry to “get to those viable business cases" much faster.