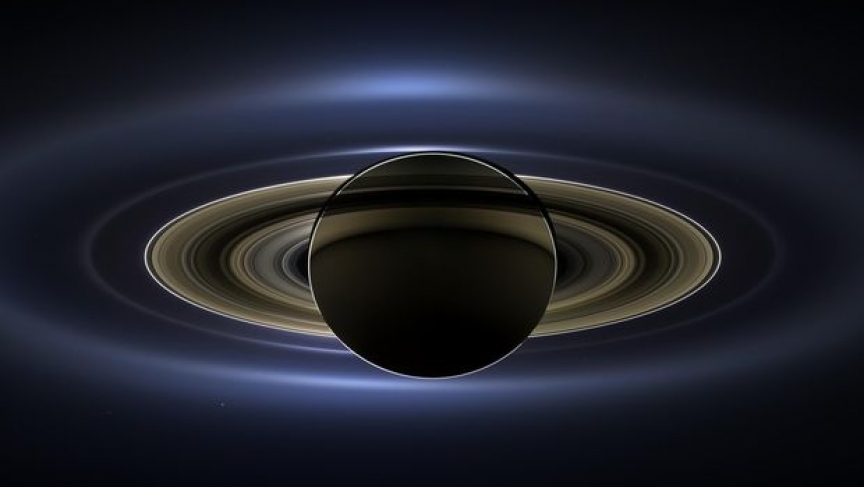 The planet Saturn is seen backlit by the sun, as seen from the Cassini spacecraft on July 19, 2013.

Saturn had 62 known moons, most of which are quite small, until now. The ringed giant added one more satellite to that count recently — a little icy rock that NASA has named “Peggy.”

Peggy revealed herself in images NASA received from the Cassini spacecraft, the space organization announced Tuesday. What's perhaps unique about this new moon is that Cassini photographs actually captured Peggy’s birth, as an icy mass emerged from Saturn’s outer A ring.

"Peggy, if it is actually a full moon, is pretty small — about half a mile wide, maybe half a New York City block," says Tariq Malik, the managing editor of Space.com. "It's cold and icy, and it could already be falling apart. But it does show that moons may still be forming around planets in our solar system."

"They have this photo of ripples in Saturn's rings of stuff coming together — a big clump of stuff right on the edge of the rings that could just pop free and be its own moon if it gets enough mass for it," he says.

Malik says over millions of years, bits of space particles make contact and get larger. As these space bits get lager, they assume a higher gravity and are able to attract more space particles and get even bigger over time — a process that Peggy is likely experiencing.

"(Scientists) haven't seen the object itself — they can only see the ripples of it and this kind of clumping arch in the rings of Saturn right on the very edge," says Malik. "What they hope is that they're going to be able to get closer in the next couple years and actually see the object itself to see if it's an actual moon, if it could escape to actually become a full-fledged moon, or if it's going to break apart or stay where it is."

The rings of Saturn have puzzled astronomers since Galileo. Some believe Saturn's rings were once a planet of their own, while others speculate that the rings formed because something hit the planet. Malik says a predominant theory today is that Saturn's rings were once much bigger than what we see nowadays, and that Saturn's 62 moons all formed from the planet's larger rings — rings that no longer exist.

"That's why scientists thought this moon formation plan, from the rings that came from that either big collision or extra material left from Saturn, was finished," he says. "So seeing an active process now, if that's what is happening and it seems like it might be, is really exciting."