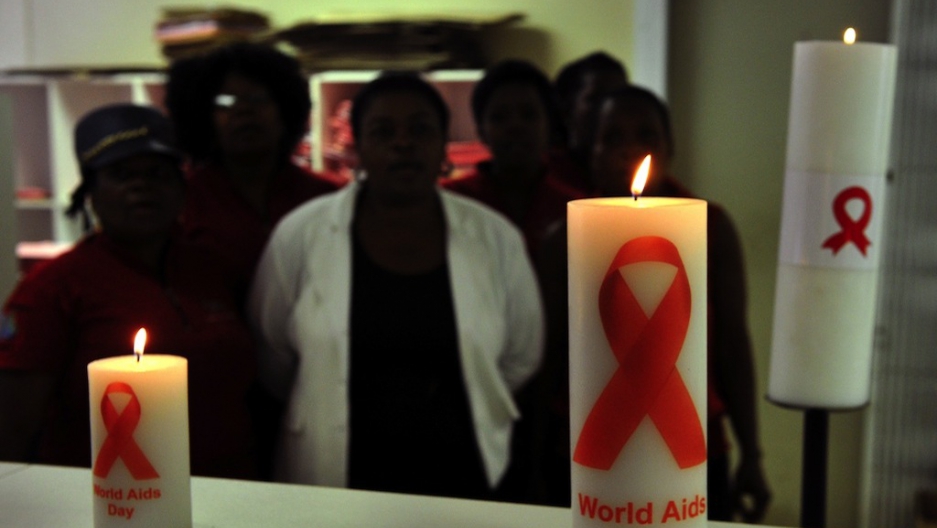 Photo taken on November 28, 2013 shows staff members of the Themba Lethu Clinic in Johannesburg, the largest antiretroviral treatment site in the country, posing behind candles commemorating World Aids Day (December 1). South Africa has been hailed as a model for HIV treatment, but some now fear its very success may be breeding complacency and making people less careful about infection.
Credit: ALEXANDER JOE
Share

WASHINGTON — News broke last week that South Africa has the fastest growing rate of new HIV infections of any country in the world, underscoring the urgency of the fight against HIV/AIDS and the fragility of our progress to date. It also underscores a perpetual truth: leadership matters and we need bold, innovative and affirmed commitment to end this disease.

Early this year, the Obama administration nominated Deborah Birx as the next US Global AIDS Coordinator and first woman to assume the role. Last week, the Senate voted to confirm her appointment. In this position, Birx will oversee the President’s Emergency Plan for AIDS Relief (PEPFAR), the largest commitment a nation has ever made to combat a single disease. Our hope is that she uses this leadership role to work with diverse groups to promote the health and rights of all people and to expand the integration of family planning and HIV services.

We have come a long way in the fight against HIV/AIDS through PEPFAR and other programs. Yet as South Africa’s news illustrates, troubling disparities, stigma, and discrimination persist and women often bear the brunt of the burden. These challenges require immediate programmatic and policy attention.

To achieve the administration’s ambitious goal of Creating an AIDS-free Generation, PEPFAR will have to find ways to effectively and efficiently reach more people and address these inequities. Reaching women — often a family’s only link to the formal health care system — will be one key element to this effort.

Consider the case of Mariam, a woman living in northern Nigeria. Mariam felt unwell after the birth of her fourth child. At first, she suspected her husband's second wife had bewitched her out of jealousy for Mariam's fertility. She explained this to a community health worker who visited her home as part of a Planned Parenthood Global-supported project to bring sexual and reproductive health services directly to women and their families.

The health worker had come to provide birth control, but upon hearing of her symptoms offered Mariam an on-the-spot HIV test, which revealed that she was indeed positive. As a result of the home visit, Mariam received an immediate referral for HIV services and today receives both family planning counseling and HIV treatment.

As Mariam’s story illustrates, delivering reproductive health and HIV services together is critical to reaching women. And women are essential to achieving an AIDS-free generation — not only as beneficiaries of services but as civil society leaders, connections to children and families, and agents of cultural change. PEPFAR’s policies must reflect this value.

Thankfully, as Global AIDS Coordinator, Birx will have plenty of help in achieving these goals. The 2012 PEPFAR Blueprint provides a bold vision for how the US can move forward as a global leader in fight against HIV/AIDS. A core strength of this document lies in its focus on women and girls and gender equality.

To fully implement this key component of the blueprint, Birx should first ensure that plans to promote country ownership include women and other marginalized groups, such as young people, LGBT individuals, people who inject drugs, and sex workers, at the table. These critical civil society stakeholders will help ensure that programs continue to meet the needs of all impacted populations, promote sustainability, create mechanisms for accountability, and promote the policy change necessary to improve the rights and health of all people.

In order to effectively and efficiently scale up access to HIV services and information and promote the health and rights of women living with or at risk of HIV, Birx also needs to continue to scale up integration of family planning/reproductive health and HIV/AIDS prevention, care, and treatment programs. The US government has made important progress on this measure, including recently establishing a new taskforce, and requiring more detailed reporting on family planning integration with HIV programs. But ongoing attention and leadership is needed to provide the tools needed and hold programs accountable to delivering integrated services.

Last but not least, the Coordinator should reverse the decision to prohibit PEPFAR funding for contraception.

There is a long-standing evidence base on the effective role of voluntary contraception in HIV prevention and promoting the overall health and rights of women living with HIV. Exciting new research also shows that delivering HIV and family planning services together leads to better health outcomes and saves money. Allowing countries to use PEPFAR funds to pay for contraceptives where needed, such as where other US family planning programs do not exist in the area, would advance health and rights and is a cost-effective use of resources.

Unlike many other policies governing the PEPFAR program that require congressional action to change, the Global AIDS Coordinator has the power to resolve this issue.

With the possibility of an AIDS-free generation within our reach, this is an exciting time to be working on global HIV/AIDS and welcoming a new leader in this effort. Getting there will require programs that reach key populations, including women like Mariam. It will also require a comprehensive approach to prevention and treatment, smart policy choices, and scaled-up resources both for HIV/AIDS and global health overall. We hope that the new US Global AIDS Coordinator does everything in her power to deliver on that vision.

Latanya Mapp Frett is Vice President –Global at the Planned Parenthood Federation of America. As the nation's leading women’s health care provider and advocate, Planned Parenthood is committed to serving as an ally to the US administration in creating an “AIDS-free Generation" nationally and worldwide.