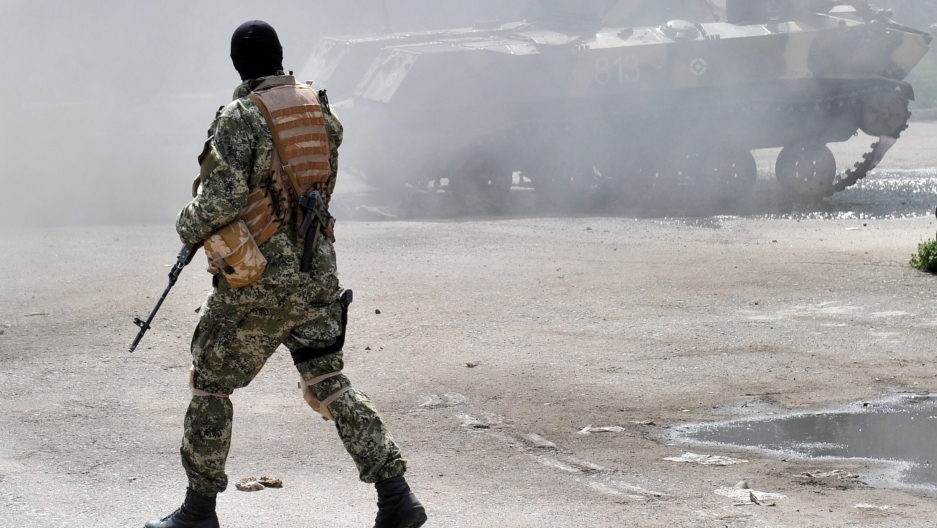 Fight us if you dare: Pro-Russian forces outside the regional state building in Slovyansk on Wednesday.
Credit: Genya Savilov
Share

SLOVYANSK, Ukraine — Even before Ukrainian troops rolled into this crumbling city on Wednesday and promptly surrendered or defected to the pro-Russian rebels who had seized it last weekend — as conflicting reports suggest — it already seemed a lost cause.

Since Saturday, the central streets of this former industrial outpost of about 130,000 have been patrolled by heavily armed, masked men, some of whom bear a striking resemblance to the Russian troops who appeared in Crimea shortly before Moscow annexed the Black Sea peninsula last month.

Most strategic points around town — the city council building, the local police station and the state security headquarters — remain surrounded by barricades of sandbags and tires, guarded by rag-tag, crudely armed teams of local “self-defense” forces in surgical masks.

Amid real anger here, the Ukrainian government’s writ is disappearing.

Local residents say they’re fed up with the new pro-Western government — backed by the months-long protests on Kyiv’s Independence Square, the “Maidan” — that’s shown little interest in extending a hand to the Russified, industrial east.

“For three months, we watched this scene on the Maidan and were against it, but no one listened to us,” said 55-year-old local Olga Vladimirovna, standing near the blockaded police station on Tuesday.

Such grievances have helped feed the wave of pro-Russian sentiments here in Ukraine’s east, where several other cities have fallen under at least some control by anti-government rebels seeking to break ties with the new Kyiv government.

“We knew how this would all end,” Vladimirovna added. “We’re not stupid people here — we knew it would result in collapse.”

In Slovyansk — a gray city of decrepit roads, shuttered factories and ramshackle, Soviet-era apartment blocks — that collapse appears to have at least somewhat materialized.

There are virtually no police officers in sight and local officials have made few attempts to regulate the situation. The vast majority remains loyal to ousted President Viktor Yanukovych’s Party of Regions.

Slovyansk Mayor Nelya Shtepa had earlier supported the protesters’ occupation of local buildings and suggested a referendum on the country’s federalization, a key demand voiced by disenfranchised protesters in eastern Ukraine.

But by Tuesday, she had fled the city and changed tack, claiming well-trained Russians had spearheaded the siege on Slovyansk and were handing out arms to homegrown rebels.

The Kyiv authorities, meanwhile, have clumsily scrambled to regain control in the east by launching an “anti-terrorist” operation that’s stalling by all accounts.

While they appeared to have partially succeeded on Tuesday in recapturing an occupied airfield in the nearby city of Kramatorsk, scattered reports on Wednesday suggested the troops who arrived in Slovyansk were Ukrainians who had sided with the pro-Russian rebels.

A senior Kyiv lawmaker denied those charges, claiming the Ukrainians had rolled into the city under the guise of pro-Russian support as a “guerilla tactic.”

Later, Ukraine’s Defense Ministry announced that “Russian saboteurs” had captured the vehicles, the Kyiv Post reported, and that those in control were unrelated to Ukraine’s army.

That followed shortly after Prime Minister Arseniy Yatsenyuk accused Russia of “exporting terrorism” by fueling the discontent and supporting the armed rebels.

In Slovyansk, with no police on the streets, protesters have set up checkpoints on all the roads leading in and out of the city, where they roam in makeshift combat gear — some armed with automatic rifles — and inspect passing cars at will.

In a dose of glaring symbolism, they’ve hoisted the Russian flag as well as their own self-styled rebel banner above the seized city council building, where several municipal workers were spotted Tuesday removing their belongings.

Ukraine’s national coat of arms, the trident, has been torn down.

But amid the outward defiance looms a sense of deep paranoia among the protesters who’ve sustained the anti-government movement here, stemming from fear the allegedly nationalist authorities — with help from their Western allies — are looking to persecute them.

That’s fed by the Russian state media on which most pro-Russian Ukrainians rely for their information, and which has cast the armed unrest in eastern Ukraine as a peaceful uprising.

Locals here celebrate Russian media as a counterweight to what they see as a pro-Kyiv disinformation campaign aimed at painting them as separatist criminals.

On Tuesday afternoon, an angry mob swarmed a local middle-aged woman, demanding to see her passport after she’d become embroiled in a political debate with another protester. The crowd loudly denounced her as a “provocateur” — ostensibly sent to sow chaos — before chasing her away with threats of physical violence.

That’s among the many reasons people here look to Russia, which they claim would provide support and stability for a region that feels politically and socially slighted by Kyiv.

Slovyansk’s once powerful industry has been gutted since the collapse of the Soviet Union and now faces even worse prospects as Ukraine pivots westward. Residents see Kyiv as a black hole for the money they say the Donetsk Region — Ukraine’s industrial heartland — contributes to the federal budget and while getting little in return.

Some, like Sergei Kharchynsky, a 53-year-old construction worker, says federalization would allow the region to conduct its own economic affairs with Russia, on which the surviving industry here relies.

“Look at it this way: Donetsk should pay a fixed tax to Kyiv once a year, and then after that it’s off the hook — it’s free to do whatever it likes,” he said.

“And when another Maidan breaks out and they ask us for more money to pay for all the damage, we’ll say ‘That’s your problem.’”

Others are more worried about their wellbeing under Kyiv’s rule.

“We’ll be plagued by hunger and outright poverty with this government,” said Vladimirovna, the protester standing by the barricades.

“And if that’s not enough, they’ll start cutting us up,” she added, referring to the more aggressive nationalist supporters of Ukraine’s new government. “‘Hang the Muscovites’ is what they say, isn’t it?”