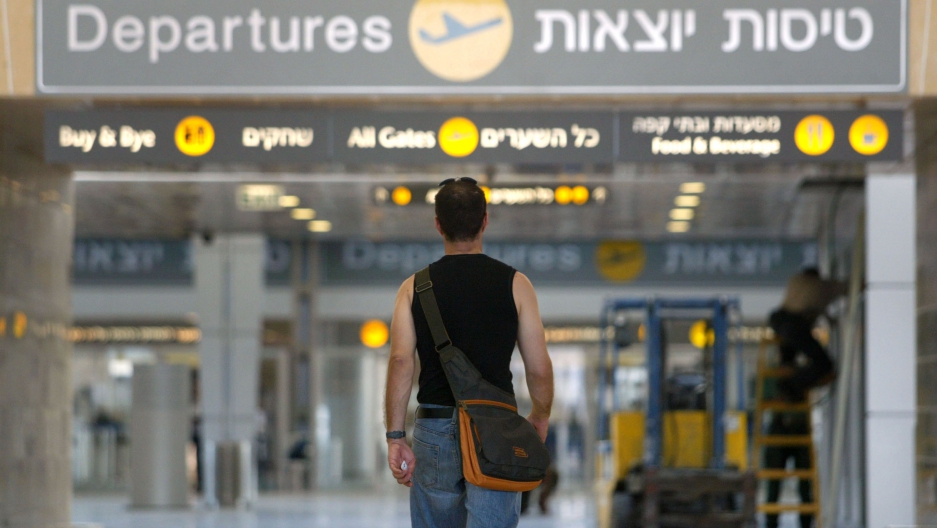 JERUSALEM — As depicted in liturgy, the Jewish holiday of Passover commemorates the Israelites’ escape from slavery in Egypt, and exodus to the Land of Israel.

3,000 some-odd years later, there’s still an exodus in Israel every spring. It just looks a little different from the one depicted in the Bible.

This year alone, close to half a million Israelis have gone abroad, escaping not the lashes of pharaonic whips but the tyranny of pre-Passover cleaning and scrubbing, not to mention the plague of visiting family members and the almost absolute impossibility of finding a slice of real bread. Schools and public offices are shuttered for the week-long holiday.

Israelis' top destination? The promised land of America. But tens of thousands are also flocking to Turkey (despite a no-travel warning), and Bulgaria and Spain are popular, too.

Then there is the counter-exodus. Of the roughly 1.2 million travelers passing through Ben Gurion Airport this week, about 125,000 are incoming tourists, tens of thousands of them Jews coming to observe the pilgrimage in the place where it all started.

Passover has become a holiday in which foreign Jews come to revel in the very experience native Israelis flee.

Israel Airports Authority spokesman Ofer Lefler was unavailable for comment because, according to his Facebook feed, he is vacationing in Kenya.

Passover can be a labor-intensive holiday to celebrate. Jewish tradition holds that in the great escape, Moses and his people did not have enough time for their bread to rise, and thus left for their 40-year trek through the desert carrying only something akin to crackers.

The customary banishment of any leavened goods has led to frantic pre-Passover scouring in observant Jewish households as well as in kosher restaurants.

An Israeli man immerses cooking utensils in boiling water to make them kosher for the Jewish festival of Passover in Tel Aviv. (Jack Guez/AFP/Getty Images)

In a column entitled "Let my people go," Ha'aretz columnist Allison Kaplan Sommer lists the reasons she and her family are spending Passover in Greece: "1. No pre-Passover cleaning. 2. No pre-Passover cooking."

Another yearly complaint among Israelis is the shocking rise in supermarket and restaurant prices due to the exigencies of "Kosher for Passover" — or, if you ask cynics, due to the massive influx of tourists willing to splurge. There's also the peculiar structure of the Israeli market. Three years ago, Israel’s streets teemed with protesters decrying local food monopolies, and newspapers began listing the national and foreign prices of many staple items. Passover hikes on top of that result in eye-popping receipts.

This week, a simple open-faced salmon sandwich at one Jerusalem café will set you back $17.

Of course, its bread base is not cut from a normal loaf. Part of the gimmickry that has taken over kosher eateries in Israel is a compulsive replication of non-Passover foods like pasta and quiche made from non-wheat, and thus unleavened, flours.

It is paradise for devotees of the gluten-free lifestyle, although the more perceptive and exasperated foodies will point out that simple dishes such as steak and potatoes are kosher all year round — no almond flour necessary.

Many Israelis just want out.

But Jewish American tourists seem to find their own form of freedom on the streets of Jerusalem, escaping what for many is the confinement of Passover observance in a non-Kosher world. Or, in other words, a week without restaurant-going.

Israeli restaurants are ready for them. "May I help you?" Ifat Aluf, the hostess at Luciana, an Italian trattoria in the German Colony of Jerusalem, asks passersby in English.

"Everyone here's a tourist," she explained. "Most of them English-speaking."

Inside, Lisa and Lowell Baron, New Jerseyites visiting Israel with their four children, enjoyed Italian delicacies made entirely from potato flour, including ersatz pizzas and hand-made pastas costing up to $21 a plate.

"I think it's amazing!" Lisa exclaimed over a slice of margherita. In America, she says, eating pizza is unimaginable during a holiday bereft of wheat and yeast.

And the prices? The Barons keep kosher, and back home, she explained, it's no different. "Anything for Passover costs three times as much."

Michael and Devorah Avrukin, Orthodox Jewish Californians, were exultant. "It's great. The experience of Passover is all-encompassing here," Michael smiled. "You feel Passover everywhere. In Palo Alto you have to invest and make an effort to feel the holiday, to make your kids understand that it's not just Wednesday, it's something more."

"It's just such a treat," his wife agreed, though she can’t agree with the Lisa Baron’s views on prices:."I was really shocked to realize that some of the Israeli Passover foods we buy in Palo Alto cost even more here."

At the Mamilla mall, a popular open-air boulevard dotted with shops and eateries, Nina Trembley, a Long Island public school teacher strolling with her husband, parents and two sons, said Jerusalem's restaurants are a huge draw. "At home no one keeps kosher so we just don't go out. This is so much better."

On nearby King David street, Allan Weg, a tourist from New Jersey, said he was visiting Israel on Passover for "the potato bread! We can't get it over there." His wife Nadine added: "It's the novelty of it."

The Wegs' daughter didn't share their excitement at roaming free in what is, for a week, something of a carnivalesque Jewish Disneyland. In Israel for a gap year program, 18-year-old Arielle smirked and murmured, "They just came for the food?"