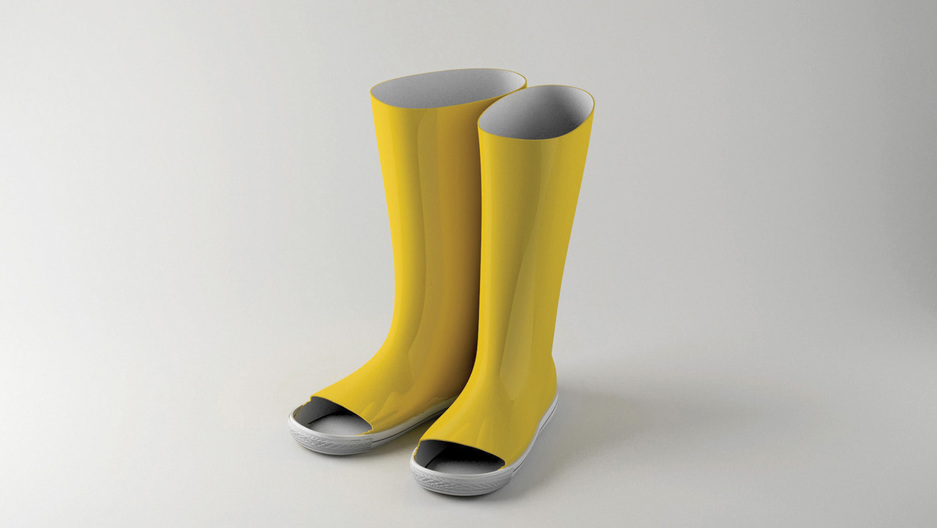 "Uncomfortable" is a word I've heard a lot while reporting on the ongoing Greek economic crisis during the past few years.

Greeks who once had good jobs, houses – a level of comfort – suddenly find it's all vanished.

“The problem is actually getting worse,” Kamprani says. “Here in Athens, and in Greece in general, architecture is not going so well. So, I also try to do other stuff. Whatever other creative thing I can try to do, I do it.”

And what Kamprani's done is tap into her own discomfort. A few years ago, she started thinking of everyday objects, and how they might be "re-imagined."

“The first sketch that I did was a toilet that was elevated six and half feet off the floor. So, you’d have to use a ladder to go to the toilet. And I thought, ‘Well, that's uncomfortable.’”

“Some hours later than that, another idea popped into my mind: a closet whose doors opened inward. Even if you put something in it, you can’t take it out very easily.”

She transferred her sketches to her computer, and started doing 3-D mock-ups of the objects.

There's an umbrella made of cement, and a beautiful bowl that sports a hole in the bottom.

There’s an inflatable door handle. Imagine trying to turn that!

And she’s got a pair of yellow rain boots, but without the toes.

“I try to design the objects to be a bit usable, to not be completely useless,” says Kamprani with a laugh. “You could use them, but you'd have to try a lot.”

She calls the set of designs, “The Uncomfortable.”

There are many variations on that classic, the fork. Kamprani's got versions with hinged tines, with a hinged handle. There's another with tines three inches thick.

They're forks, Kamprani says, but they're not.

“When it comes to everyday objects, we have an idea in our minds what it could do. We all know what a fork does, and a spoon does, and all these everyday objects. So you have an expectation for that object. What I design is very close to that, but a bit different.”

For my part, I started out by laughing at Kamprani's designs. And then, after a couple of minutes, I got a bit annoyed.

“Many people get angry seeing this,” she says. “I don’t know why. They say, ‘Oh it just makes me so angry.’”

Kamprani thinks it's because people start thinking about what it would be like to try to use her uncomfortable objects.

Take Kamprani's design for a pretty, blue watering can.

She's turned the spout backwards, so that if you tried to pour the water out, it would instead pour right back into the can.

“It's not even in the guidelines I have for myself for uncomfortable. I think it's completely useless. It doesn't do anything. But, it's very symbolic.”

Symbolic, Kamprani means, of life in Greece these days especially, which has moved beyond the uncomfortable, and gone straight into the surreal.

But what would be even more surreal, she says, is if one day the Greek economy actually improved, and she had enough money to build real-life versions of her computer-designed creations.

I'd be first in line for those toeless yellow rain boots.

They'd go well with that watering can that doesn't actually water.