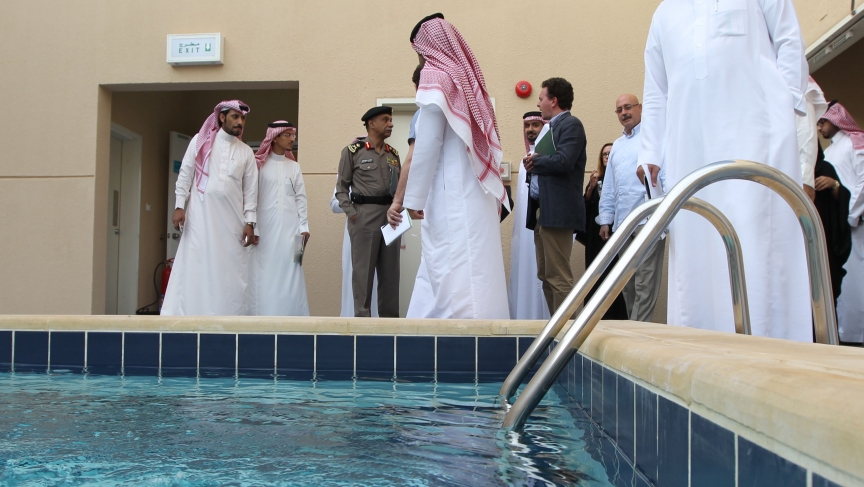 Local and international media representatives are given a tour of a center for the rehabilitation of suspected terrorists.

At least 1200 men from Saudi Arabia have left their country to fight in Syria. The Kingdom’s security officials are worried that those men may be radicalized there, and return home to wage war against Saudi Arabia’s rulers, the House of Saud.

The country recently approved a new counterterrorism law, that makes it illegal for Saudis to go to fight in Syria. That comes on top of an expansion of what are called “Terrorist rehab centers.”

One of those centers, The Mohammed bin Naif Counseling and Care Center, is located on the dusty outskirts of the Saudi capital, Riyadh.

It’s housed in a walled compound that used to be a holiday resort. There are two parts to the facility: the administrative side, which still looks like a resort, with palm trees and pools and another side that looks more like a prison.

Interior Ministry official Colonel Omar Zallal al-Kahtani walks down a long hall. At the end, two guards sit next to the steel door that divides the two sides.

The guards unlock the door, to reveal what looks like a prison yard. But there are no guard towers, and the walls could be easily scaled.

Colonel Kahtani says the center is somewhere between imprisonment and freedom. The 14 men undergoing treatment are referred to as “beneficiaries,” not prisoners or even patients.

“But at the same time, they (the guards) watch them,” he says. “If they see anything wrong, they could go back to prison. This is a rehab center. They want to make sure these people could live with society.”

In the yard, a half-dozen plainclothes guards greet us

Nearby, six of the current Saudi “beneficiaries” linger inside and at the door to a classroom. Their beards are long and bushy, and they wear the short tunic favored by puritanical, Salafist Islamists. All appear to be in their 20s or 30s. One of them sports brand new neon Nikes. They’re waiting for their teacher to arrive.

The teacher is a short, bespectacled US-trained criminal psychologist named Nasser al-Arifi.  His lecture today is an example of the program’s focus on using a mixture of Western therapy and Islamic teachings to “cure” the young men of their extremist leanings.

“Today we are going to talk about how they control their anger. And this is very important for them. We use just the psychology theories, besides what comes in Koran, and what the prophet Muhammad says about controlling anger,” Arifi says.

The rehab center is named after the Saudi interior minister, Prince Mohammed bin Naif, who has championed the rehabilitation approach to combat what the staff here calls “extremist tendencies” among some Saudis.

More than 3000 men have graduated from the rehab program since it first started in 2008. Their offenses vary widely. Some fought in Afghanistan or Iraq, or were plotting against the Saudi state, or one of its allies.  Some were basically picked up for hanging out with the wrong crowd — like Badr al-Ezianzi.

He’s a tall, shy and skinny 28-year-old Saudi who speaks softly. But almost two years ago he was arrested and imprisoned for his “tendencies.”

“When I was arrested I had ideas against my country, the government, and also against non-Muslims,” he says. “I was also thinking about going for jihad. I had relationships with people who were suspicious. And so this worried the security agencies, and they arrested me.”

Ezianzi says he was upset by what he saw the American military doing in Afghanistan and in Iraq, against his “Muslim brothers.”

But when the police arrested him, he hadn’t actually done anything wrong. He was just picking up his passport from a government office.

“I had bad thoughts and ideology, and I was arrested in advance, to prevent me from doing anything,” he says.  “But if I weren’t caught at that time, maybe I’d be in Syria right now — or dead.

Ezianzi is a rehab program success story. He says the “beneficiaries” learn three key points about paricipating in a proper jihad:

“The first condition is that we should be under one flag, one leader," he says. "The second is that we should have permission from the ruler. And third, is that our parents must approve our going on jihad. I didn’t have any of these three.”

In other words, holy war is okay, as long as it’s approved by the Saudi King. This would seem to be good news for the United States, because Saudi Arabia is an ally, but it does give some analysts pause.

Sayeed Wahas is a professor of political science and medicine, and one of the architects of the rehab program. He says trying to draw a line between good and bad jihad should be enough to stop people who think they are fulfilling God’s will.

“Unfortunately,” he goes on, “those people are going to interpret the verses of the Koran according to the way they are thinking. For example they would like to go directly to the paradise. The life is distressing, it’s not easy, when I’m just going to die, and through the process of death, I’ll be in paradise.”

Wahas says lots of people are angry about the situation in Syria, the occupation of Afghanistan and even Saudi Arabia’s alliance with the US — which may lead them to consider fighting. But only a few act on those thoughts, he says. And these are the ones with psychological issues.

Money, a job and a family also help convince "beneficiaries" that life can be good without jihad.  Badr al-Ezianzi, for example, has been released and lives with his wife and four children. The government gave him $25,000 to open a shop. He says he'll never go back to Jihad. Unless, of course, he can meet those three conditions for jihad that he learned at the rehab center.