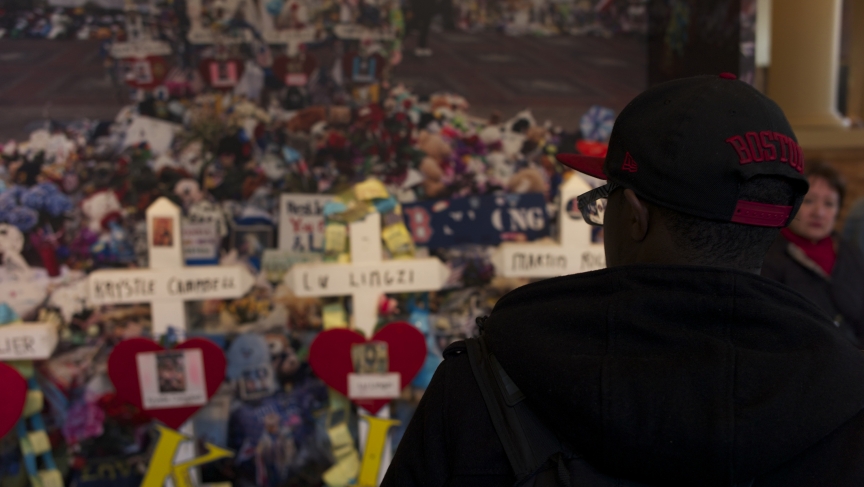 A man observes the Dear Boston exhibit at the Boston Public Library.

A few blocks from Boylston Street in downtown Boston, you'll find an average shopping thoroughfare in a northeastern city. It is framed by historic architecture and outcroppings of mediocre modern styling.

But identification is everything.

As soon as you say it's the final stretch of the Boston Marathon, no one can ever think of it again as an unremarkable stretch of city street.

This past weekend, I visited the Boston Public Library on Boylston which is hosting an exhibit called "Dear Boston." It pays homage to the victims of the bombing, the survivors, and the resilience of Boston and the world of runners who consider this one of their homes.

It's a small exhibit, considering the volume of running shoes, flowers, origami cranes, and shrines of all types from the last year that curators struggled to sort through. It's the shoes, though, that struck me — 150 pairs out of some 600 left at an impromptu memorial last year.

The shoes made me think of people from everywhere across the globe, stepping up in support of those effected by the bombing. They also made me think about the 16 people who lost limbs in the bombing. And because these horrors are so well documented in this digital age, I also remembered the pictures of shoes scattered around the bomb sites.

These thoughts continued to rattle as I left the library and headed back into the normal bustle of Boylston Street.

Soon, runners would be cruising under the finish-line banners already draped across the street — some 9,000 more runners than last year, many embodying the slogan displayed on a t-shirt in the library exhibit which read, "We will not run in fear."

That idea also seems to be the driver of the expected one million spectators for next week's marathon — double the usual turnout — people who won't be cowed by fear from gathering in Boston.

I've been reminded of a different sort of gathering lately, each morning, when I walk in The World's newsroom.

One of the first things I see is a photo, a screensaver one of my colleagues recently put on his computer. He chose it because its impact is stunning.

In it, thousands of people are clogging a main street in the Damascus, Syria suburb of Yarmouk. It's a commercial and residential street, it seems, like Boylston Street in Boston.

They are not there to cheer. They are there to collect food. Other Syrians have had to run, to flee into exile.

That's one lesson from the bombing that hasn't been discussed as much.

In a world where bombings happen often — in places like Syria — I feel fortunate to live here, where at least the physical site of destruction returns to normal so quickly. It is a place where the 264 people who were unlucky enough to find themselves at those two spots on Boylston last year had access to some of the best hospitals in the world. And it's a place where people are actually able to go out and run without fear.