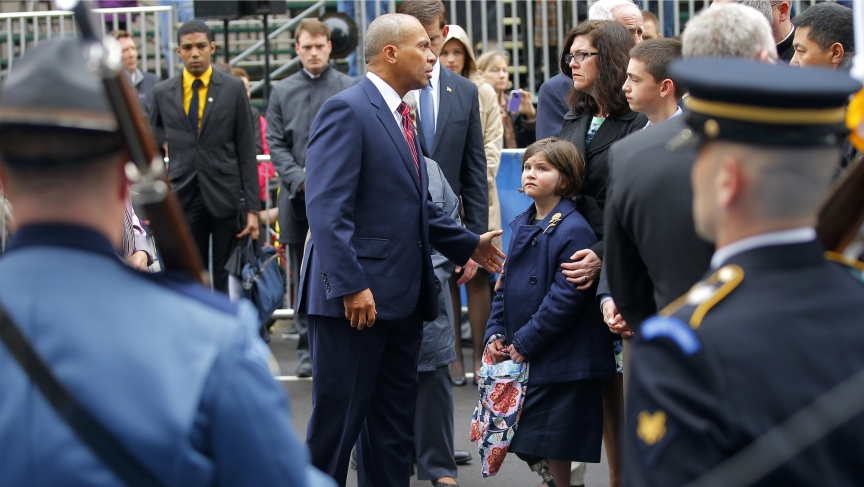 For Massachusetts Governor Deval Patrick, the great lesson of the tragedy a year ago was how the state came together in crisis.

PRI's The Takeaway host John Hockenberry spoke with Patrick about how the events affected his leadership, starting with a question about whether Patrick ordered the city of Boston into a lockdown.

Patrick: Well, I asked. I asked out of concern for safety and because we had an awful lot of things happening without knowing the scope or scale of what we were dealing with. It was very, very helpful. And on the whole, people did respect it.

Hockenberry: Now, I don't expect you to claim there was some sort of magic in your particular approach that caused people to comply, it was certainly a function of the events themselves, but it certainly raised your leadership profile nationally, wouldn't you say?

Patrick: I don't know. I wasn't thinking about that then. I haven't thought about it very much since. I was thinking about what we needed to do to make sure we were all focused — all of us, not just those in an official capacity or with an official role, but that whole community was focused on getting to the bottom of this as quickly as possible and staying safe.

Hockenberry: President Obama suggested your style would be great at the federal level. Is he doing you any favors or is he mostly complicating your life?

Patrick: He's mostly complicating my life, John. I mean, I hadn't been at this job for so long that it doesn't blow my mind when the president of the United States calls you by name and says nice things publicly. I appreciate that, but I think that the real compliment belongs to the team that acted like a team. And to the citizenry who were just marvelous in their consistent and repeated demonstrations of kindness and grace.

Hockenberry: Is a tragedy like the bombing in some sense an easier event to deal with in terms of forming a team, than say something like the policy implications of the launch of Obamacare in the state of Massachusetts, which was a different kind of challenge and maybe didn't go so well from a team perspective.

Patrick: Two things I'd say: You'd rather not test that thesis because you need a tragedy in order to do so. I will say that when you think about what we've been able to accomplish in the Commonwealth in the last eight years in education and in healthcare coverage, where even with the implementation of Obamacare we have added more than 200,000 to what was already the highest level of healthcare coverage in the country.

What we've been able to do in veteran's services, in infrastructure investment — where we lead the nation — we have shown we can work together as a team. I will say that this notion of common destiny as a motivator for common cause is something I feel very strongly about and it's how I've tried to govern. I think that everybody got a glimpse of that and understood that in the midst of that tragedy in, I think, a particularly acute and important way.

Hockenberry: Thinking back to the bombing now, there was a foreign policy dimension of that story, as well as a domestic policy dimension. What do you think of the second guessing of the Russian information sharing and federal, state and local information sharing? And how do you, as a governor, think about homegrown radicalization which was a part of what happened, independent of Russia?

Patrick: First of all, on the second guessing, I think it is inevitable. I knew a year ago about the fact that Russian intelligence had not responded to inquiries from the FBI for more than a year before the event. And, of course, that is worrisome. But most of what we know today does not necessarily suggest that it was knowledge that could have prevented what happened, which really comes to the second point that you raised about the radicalization of people in our own midst.

Obviously, that is something to be concerned about, but also to be careful about. And the care, I mean, here is both in terms of how we are alerted to specific acts and specific behaviors without turning that into categorical condemnation or frankly suspicion about whole groups of people.

Hockenberry: Law enforcement might say or maybe the strident voices in the media might say that the only preventable approach would be to act on every tip that the FBI has, and maybe round people up and bring them in as a preventive matter for an event like this. Ruling that out, because it's not practical, what is the preventable approach to radicalization?

Patrick: I do think that it will continue to be a matter of judgment. We need to make sure our law enforcement teams have both the research and the training to exercise that judgment wisely. I am not prepared to trade off the liberties that distinguish us as a country for an absolute permanent lockdown, to use a term that you used earlier, and I don't think most Americans are.

Hockenberry: Finally, you alluded to just how complicated the question of "Are you running for higher office?" makes your life as governor here in the Commonwealth. That issue aside, what do you make of the campaign finance issues in politics for anyone who might be considering running for a federal office? What do you see?

Patrick: I'm worried about the democracy, and I was worried about our democracy even before the Supreme Court decisions, but they complicate the picture I think even further. We have an electorate, certainly here in Massachusetts, and I think it's not unlike much of the rest of the country, where an awful lot of people don't participate because they don't think it matters. They don't think they can get the attention of their elected leaders, unless they write a check. I don't think that's what the founders had in mind. I don't think that's what most Americans have in mind in terms of a healthy democracy.

I don't like the decisions of the Supreme Court, but I respect the authority of the Supreme Court to make those decisions. I think the only way they are going to be changed is by constitutional amendment and we ought to be thinking about that. But beyond that, we need folks who are going to get in to public life and run for public office who have in mind the voice and the interests of the people who cannot write that check. Because that is the only way we are going to get a better government, and we deserve a better government.

This story is based on an interview from our partner, The Takeaway, the daily show that invites people to be part of the American conversation.