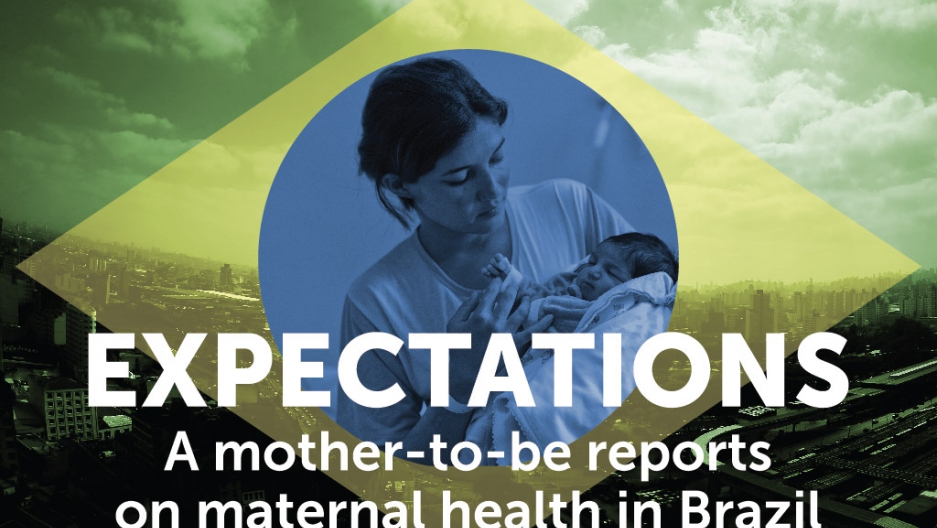 This is the second post in a blog series called “Expectations" written by deputy editor of global health Marissa Miley. Expecting a child herself, Miley is reporting in Brazil to better understand how women experience pregnancy and childbirth. Read Part I.

SÃO PAULO, Brazil – Thais Soares and Aline Krisna, both 22, have been sitting in the hot, dimly lit corridor of a public health clinic here for an hour and a half. But even on hard plastic chairs, with sweat forming beads on their foreheads, they talk excitedly about what’s in store as they face the closed door of Consultório 08.

The young women, friends since age 7, have walked here from their home, Morumbizinho, a favela in one of the poorest neighborhoods in the western section of the city. They are here for Krisna’s fifth prenatal visit, and they intend for her to be seen before the clinic closes at 5 p.m. Today Krisna will schedule her second ultrasound, and she tells me through a translator that she cannot wait to learn the gender of the baby growing inside of her.

Krisna is one of the more than 100 pregnant women registered with the clinic, called UBS Jardim Boa Vista. It’s a modest, one-story center that functions as a primary care unit under Brazil’s family health program – a nearly 20-year-old, government-run initiative. The program gathers small teams of doctors, nurses and community health workers who work together to provide comprehensive primary care across the country. Today, there are an estimated 32,000 family health teams covering 110 million people.

With just seven general doctors and six nurses on staff, UBS Jardim covers nearly 20,000 people with six family health teams in an area less than two miles wide. UBS Jardim is the only health center in this section of the city. There is no hospital. The bulk of its staff is made up of the critical but poorly paid and insufficiently trained community health agents who make daily house visits, checking in on the health of residents, including Krisna.

At UBS Jardim, as with all of Brazil’s public health clinics, services are free for all “if you stay in line long enough,” said Rodrigo D’Aurea, one of the clinic’s doctors. In February alone, the doctors made 3,000 consultations with patients, and the nurses made more than 1,000.

Krisna and Soares don’t seem to mind the wait, even though Soares is expecting, too. She’s nearly seven months along. They sit with their legs slightly spread apart. I sit down and join them. The three of us are all due this summer, within weeks of each other. But our prenatal experiences have been quite different, and not just because of our differences in health providers.

The young women have lived in Morumbizinho since they were born. The favela’s name, which translates to “Little Morumbi,” is a mocking reference to Morumbi, one of the wealthiest neighborhoods of São Paulo – a district best known for its gleaming shopping malls, luxury hotels and one of the most acclaimed private hospitals in the city.

Morumbizinho, by contrast, has shoddily constructed homes built precariously into the side of a hill. The favela has been here for 40 years. Though there is electricity inside many of the homes, the favela is not tied into the city’s sewage system, and the narrow passageways that wind up the hill are marked by scattered garbage and bugs swarming around warm puddles. With fewer than 1,000 residents, the favela is relatively small; the largest favelas in Brazil are home to tens of thousands.

The young women do not speak English and I do not speak Portuguese, but even without the participation of our capable translator, we could understand each other through expressive gesticulations. Much about pregnancy needs no translation: the grogginess of morning sickness, the discomfort of heartburn, the pain of backaches; all significantly muted by the unbelievable joy of feeling the baby kick for the first time.

My husband and I had wanted to start a family. But that was different for both Soares and Krisna. “It was a huge surprise,” Soares said. Krisna, nodding her head, felt similarly.

Like an estimated 77 percent of Brazilian women age 15 to 49, Krisna and Soares had been using modern contraceptive methods. Then Krisna found out she was pregnant one week before her wedding day. She had been using an injectable contraceptive, but in the chaos of wedding planning, she forgot to go for her shot. Soares didn’t know she was expecting until three months in to her pregnancy. She, too, had forgotten to take a number of her birth control pills. But neither woman regretted the surprise – even Soares, who is unmarried.

The doctors here at UBS Jardim say that this is common, but not because of a lack of access to reproductive services. “It’s a social issue, not a contraceptive issue,” D’Aurea said. For many poor young women, he said, getting pregnant is a way of “social climbing” – of getting your own house, getting away from your family, getting a life of your own.

Krisna’s monthly prenatal visits and vitamins are covered under the national care system. Soares had tried having her pregnancy followed at UBS Jardim as well but the wait for a consultation was too long, she said, so she went to a private clinic. She recently stopped working and has no idea how much the clinic is costing her parents, who are footing the bill.

In the US, it’s assumed that you’ll have a normal delivery unless complications require a Caesarian section. But here in Brazil, most women who can afford the private health system prefer C-sections. D’Aurea said that 90 to 95 percent of women who deliver in private clinics get C-sections, but only 5 to 10 percent of the births in a public clinic like UBS Jardim will be.

So it came as no surprise to me that Soares told me she would schedule a C-section and Krisna said she would have a vaginal delivery.

“I want to feel the process of giving life,” Krisna said. She also believes the recovery process will be faster.

Soares conceded that might be the case, but that she is scared of going through labor. “I’m afraid of having pain,” she said.

It’s nearly 5 p.m. and Krisna still has not been seen. But talking about impending motherhood seemed to be good distraction. Asked what she looked forward to most, Soares, who already knows she is having a boy, said, “I just want to grab him and hug him.”

Marissa Miley is reporting from Brazil as a fellow with the International Reporting Project.

More from GlobalPost: Expectations: A mother-to-be heads to Brazil to report