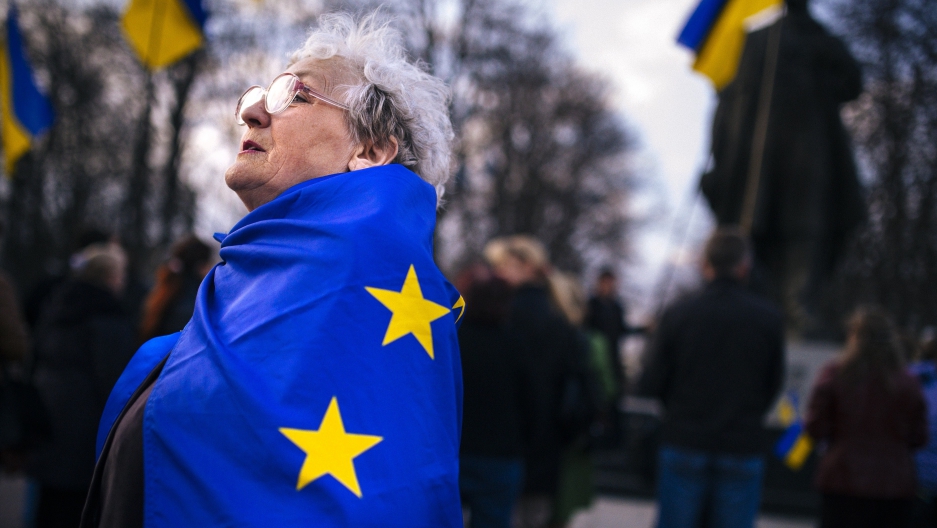 Don't get your hopes up: A woman wrapped in an EU flag at a pro-Ukraine rally in the eastern city of Lugansk on Tuesday.
Credit: Dimitar Dilkoff
Share

LISBON, Portugal — As tension mounts in eastern Ukraine, Europe's declarations of a strong and united response are starting to sound as credible as Russia's claims not to be involved in fomenting the unrest.

On Monday, foreign ministers from the 28 European Union countries filed out of a day-long meeting in Luxembourg to assure journalists that the bloc's position was "clear" and "strong" in response to the takeover of government buildings in several Ukrainian cities by armed units loyal to Russia.

However, they announced no concrete action against the regime of Russian President Vladimir Putin beyond a pledge that an unspecified number of names would be added to a list of 33 Russian and Ukrainian figures currently banned from traveling to the EU and subjected to a freeze on their assets in Europe.

Stefan Meister, an expert in EU-Russia relations at the European Council on Foreign Relations, says the group’s reaction to the latest escalation is consistent with its response throughout the crisis. “It's just not sufficient. It's the minimum,” he says.

"EU member states can’t agree on serious sanctions on Russia," he said in a telephone interview from his office in Berlin. "They have economic interests in Russia and they can agree on neither energy sanctions nor financial sanctions, that's the problem."

Officials at EU headquarters in Brussels expect the extended list of names will be released this week. They declined to say whether the bloc would follow the United States by blacklisting business leaders close to Putin as well as politicians.

Even the inclusion of so-called oligarchs on the US list has failed to persuade Putin to de-escalate the Ukraine crisis, prompting many to call for wider economic sanctions in response to the actions of pro-Russian gunmen in the country’s eastern cities.

"It's very clear that Russia's hand is deeply engaged in this," he told reporters at a meeting with EU defense ministers in Luxembourg on Tuesday.

Ukrainian forces responded on Tuesday, recapturing an airfield in a military operation against the separatists.

Despite condemning Russia's actions, Fogh Rasmussen again stressed that NATO has no plans for any military intervention to defend Ukraine.

Instead, the alliance is working on strengthening the defenses of its eastern members, particularly Poland, Romania and the Baltic states of Estonia, Latvia and Lithuania. They are all concerned spillover from the Ukraine crisis could threaten their territory.

The top alliance commander in Europe, US Air Force Gen. Philip E. Breedlove is scheduled to present enhanced plans for protecting the eastern allies in a meeting of the alliance's policymaking North Atlantic Council in Brussels on Wednesday.

Poland's Defense Minister Tomasz Siemoniak on Tuesday said those plans should include the permanent stationing of NATO military bases in the eastern states — in defiance of Russian objections.

Fogh Rasmussen hinted the alliance is looking at such options by saying NATO's plans would include "appropriate deployments."

However, European countries are divided about such moves. Some — including Germany, the Netherlands and Italy — are concerned about provoking Putin.

EU headquarters has been tasked with drawing up a list of possible economic sanctions that could be applied in the event of a further escalation of the crisis.

French Foreign Minister Laurent Fabius suggested that an emergency EU summit may be called for next week if talks scheduled in Geneva on Thursday between Russia, Ukraine, the EU and the United States do not lead to a breakthrough.

At those talks, EU foreign policy chief Catherine Ashton and US Secretary of State John Kerry are expected to ask Russia to pull back troops from the border and revoke a resolution by the upper house of the Russian parliament authorizing the use of force against Ukraine.

More from GlobalPost: How Europe can kick its Russian gas habit

In theory, the EU has greater economic clout to deter Putin than the United States.

The European bloc is Russia's biggest trading partner, accounting for 41 percent of its total international trade. Two-way sales were worth over $450 billion in 2012, more than 10 times the value of US-Russia trade.

However, EU nations remain wary of imposing the sort of tough economic sanctions that would hurt a Russian economy battling to stay out of recession. The Dutch foreign minister on Monday said it was too early to impose wider sanctions. His Luxembourg counterpart cast doubt on the effectiveness of punitive economic measures.

Meister says the risk to European economies tied up with Russian investments and energy exports may mean the EU would be reluctant to act decisively even if faced by an open incursion into Ukrainian territory by the force of 40,000 Russian troops that NATO says is massed across the border.

"It must be a model like the Iran sanctions — financial and banking sanctions, which would really hurt the Russian economy," he said. "I'm very skeptical the EU will really do that... because it's very costly."