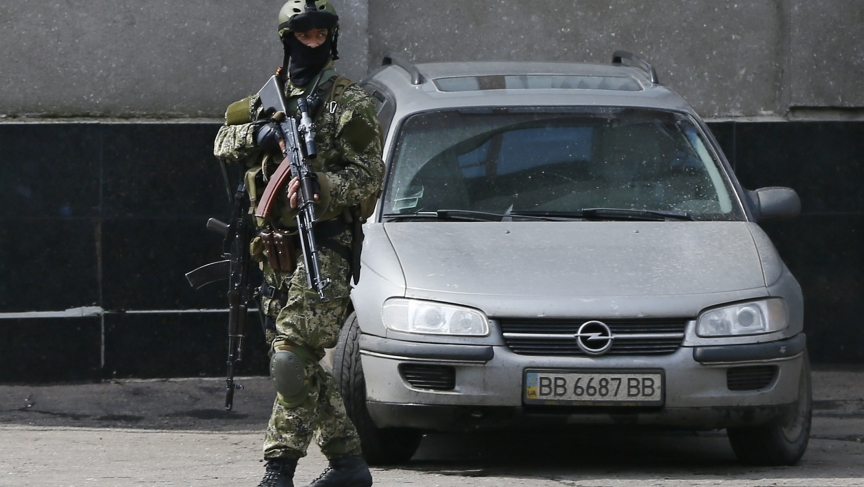 A pro-Russian armed man stands guard on a street in Slavyansk, in the Donetsk region of eastern Ukraine. Professional-looking troops with specialized Russian weapons but no insignia are spreading across eastern Ukraine.

More than half-a-dozen towns and cities around the key eastern Ukrainian province of Donetsk appear to be under the control of pro-Russian gunmen.

Ukrainian threats of military action to remove them have failed to materialize.

Max Seddon, a reporter for Buzzfeed who is in Donetsk, says the failure of the Kiev government to act is a clear sign of failure.

“They might as well just be like the European Union and say they’re gravely concerned and not do anything serious about it,” he says.

"The upshot," Seddon adds, "is that the central government in Kiev has effectively lost control over this province."

Ukraine blames Russia for orchestrating the unrest, and says Moscow has sent in troops without insignia, just as they did in Crimea in March.

NATO's secretary-general Anders Fogh Rasmussen has echoed that, saying the presence of men "with specialized Russian weapons and identical uniforms without insignia, as previously worn by Russian troops during Russia's illegal and illegitimate seizure of Crimea, is a grave development."

Max Seddon hasn't seen them himself, but there's plenty of pictures to be found online, "so they're definitely there," he says.

However, he adds that there isn't really a need for some sort of massive Russian special operation.

“You do not need to send in the tanks when your opponent can’t even muster the cops. I haven’t seen a single representative – apart from traffic police – of the central Kiev government for the last two-and-a-half days.”

Most of the local police appear to have gone over to the pro-Russian side.