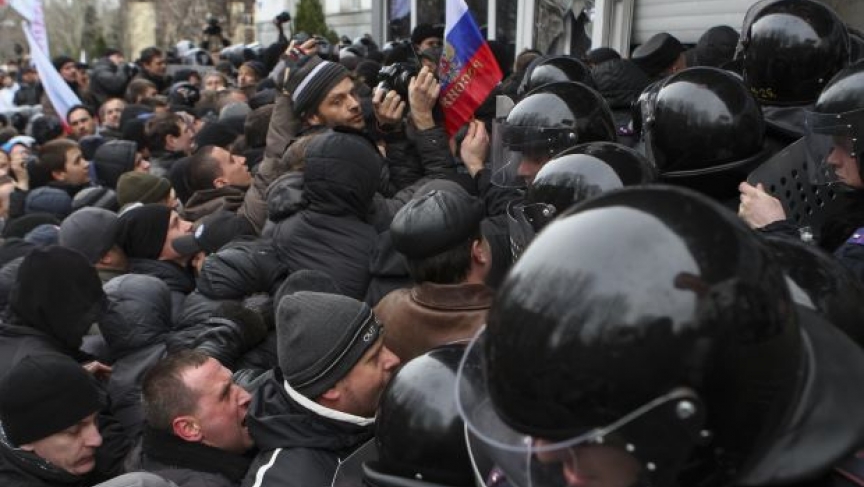 Pro-Russian demonstrators scuffle with police during a rally in Donetsk March 16, 2014.

The situation in eastern Ukraine has deteriorated in recent days, with shootouts, roadblocks and the death of at least one Ukrainian officer, as officials try to get a handle on Pro-Russia protests in some cities.

"These are pro-Russian demonstrators who are demanding protection. They would like to see Russian troops come in and keep the peace," says David Herszenhorn, who's based in Moscow for the New York Times.

"But it’s important to remember that there was no threat to peace before these violent demonstrations started," he explains. "So they're effectively asking for President Putin and Russian forces to protect them from themselves, or to protect them from some sort of imaginary threat from Kiev that we just haven't seen yet ... fascist invaders of some sort coming to oppress Russian speakers in the east."

Putin's spokesman Dmitry Peskov said, "Unfortunately, we are receiving a lot of such requests from the regions of east Ukraine, addressed personally to Putin, with a request to help, to intervene in some form. The Russian president is watching the development of the situation in these regions with great concern."

Putin is not the only one concerned about the increasing tension in eastern Ukrainian cities. Canada, Japan, the US, the Organisation for Economic Cooperation and Development and NATO have all imposed sanctions and restrictions on Russian officials.

"Everyone in the world has concerns over unrest in eastern Ukraine. The big question is: at what point, if ever, does Russia go in with military force?" Herszenhorn says.

Despite warnings from Russia, Ukraine's central government seems prepared to use force to reassert its authority in the east — in spite of tens of thousands of Russian troops mobilized along Ukraine's eastern border.

"It’s not clear they have those capabilities, as they've threatened," Herszenhorn says. "If they do make that kind of move, it could provide the kind of pretext that Russia seems to be looking for to send in its own troops across the border to protect the people that it says have a right to be demonstrating and seizing these buildings in opposition to the government in Kiev."

On Thursday, the Russians will meet representatives from Ukraine, the European Union and the US in four-party talks in Geneva to try and resolve the current crisis.

Herszenhorn says the standoff is fueling nationalism in Moscow. Ever since Russia’s unilateral annexation of Crimea, there have been Russian flags flying from apartment buildings and in places where they hadn't been before.

Herszenhorn says there’s an alarming xenophobic chill descending on Moscow. He points to one recent and unsettling example.

"This banner was unfurled in front of Dom Knigi, one of the largest bookstores in Moscow showing five well-known political opposition figures and two space aliens — you know, basically referring to the ‘traitors among us.'"

He says there's now a Traitors.net website, where patriotic Russians can name traitors and describe how they are undermining Russia's interests. He also says there is heightened anti-Western and anti-American sentiment, "which I think everybody feels throughout this city."