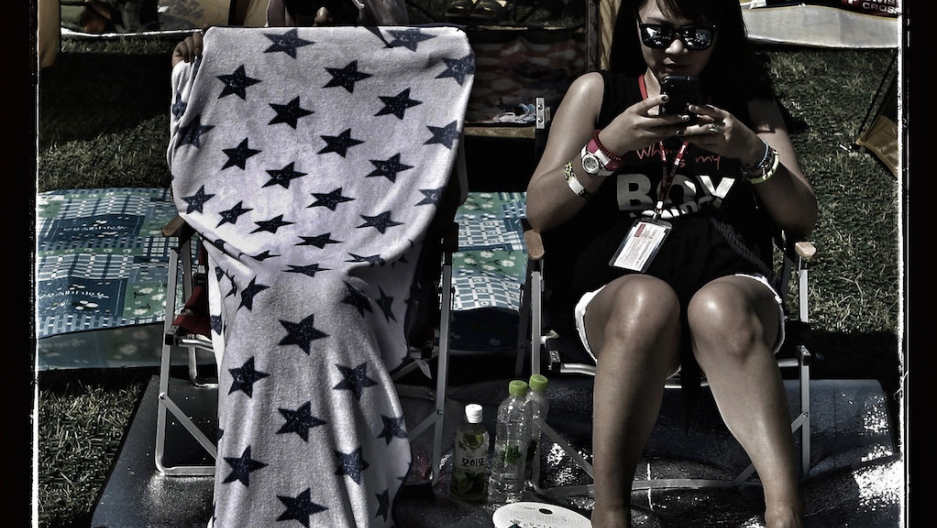 SEOUL, South Korea — The scene on the Seoul subway these days resembles any other modern underground network: throngs of high school students and commuter droids, hunched over, aloof to their surroundings, unable to stop playing with their handheld thingies.

Only here in South Korea — home of Samsung and some of the world’s zippiest internet access (both mobile and hardwired) — people take their digital habits to an extreme.

So much so that the government is worried.

Two recent studies plot a rise in the number of South Korean teens at risk for smartphone addiction — a condition that some psychologists formally call nomophobia (for "no mobile phone phobia"): the fear of being without one’s phone.

The study also found that 9 percent of adults are at risk of smartphone dependency. Smartphone users at risk of addiction spent about five and a half hours a day buzzed up on their gadgets, according to the national government study. The average South Korean smartphone owner spends over four hours a day bonding with her device.

On April 8, the Seoul city government followed up with its own study, claiming that 16 percent of teenagers in the capital are at “potential risk” for smartphone addiction, while 4 percent fall in a “high-risk” group. Municipal authorities surveyed close to 5,000 students, ranging from the fourth grade to high school sophomores.

About 70 percent of South Koreans now use smartphones, significantly more than the 58 percent of Americans (as of January 2014) and 55 percent of Canadians (2013).

There’s a good reason for this. The government has aggressively embraced the web as part of its uber-successful development strategy. South Korea was the first to roll out the searing LTE-A network last summer. And that’s nothing: it already plans to unveil a 5G network by 2017 that’ll let you download an entire film in, yes, one second.

There’s evidence that excessive smartphone use is harming the nation and its youth.

A 2013 study of nearly 200 adolescents in Korea showed that those who used their gadgets frequently couldn’t concentrate and even felt aggression, far more than those who didn’t use their phones as much. Obsessive smartphone checking, especially before bed, can also lead to insomnia, according to one study at the University of Michigan.

Hyuk-joo Yoon, 20, is preparing for two years of mandatory military service, hoping to land a prestigious placement. But he says since he feels glued to his smartphone, he’s had trouble getting out and exercising. “It['s] like being unable to concentrate and get things done, and I even had trouble getting through my long days of work in high school,” he said. “Kids need to study, and they can’t if all of them carry smartphones around their schools.”

Experts say the pressures of student life fuel the smartphone buzz — along with more long-standing but similar addictions to computer games, television, and the internet, explains Namkee Park, a communications professor at Yonsei University in Seoul. “Peer pressure and social influences are prevalent in Korean society,” Park said.

South Korean society is notoriously high-pressure. It’s the developed world’s suicide capital, and its workers suffer under some of the longest commute times. Students here can feel the strains of academic success, enrolling in “cram schools,” or after-school academies where they overload into the night, preparing for rigorous university entrance exams that sometimes make or break their careers.

There’s an intense level of peer pressure to have the newest gadgets. “Students not using a smartphone could be isolated from their social circles” and carry the psychological burden of being an outcast, Park said. On top of that, “The daily life of teenagers is quite tight, both with their school schedules and the time needed to commute,” he added.

Park said that smartphones, with their easily downloadable games and apps just a tap away, don't give students the snippets of time to relax from the daily grind. In addition to concentration problems, he pointed out that students can easily watch violent and sexually charged videos.

South Korean bureaucrats are taking on the role of nannies for the nation’s tech-addicted youth. The government is already enforcing a midnight curfew for computer gamers under 16 years old, preventing them from tapping away at their keyboards on League of Legends and Sudden Attack, two the nation’s most popular gaming pastimes, through the night.

Now, authorities say they could expand the nighttime shutdown to smartphone gamers, and distribute apps that would censor potentially harmful content. The government also plans to dispatch addiction experts for classroom discussions.

While Park agrees that children shouldn’t be allowed to download violent programs, he says too much government intervention is short-sighted. “People should be allowed to use their telephones any time, at any place,” he said, adding that it’s the responsibility of parents to keep their children in line.