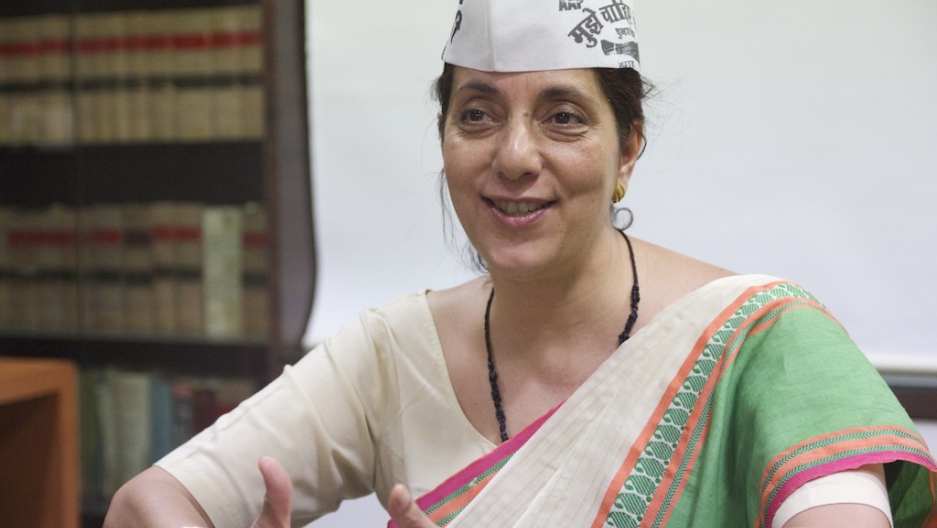 Former banking executive Meera Sanyal bites back against critics who say she and the Aam Aadmi Party are unfit to lead, pictured in Mumbai in March 2014.
Credit: Melissah Yang
Share

A parliamentary candidate for the Mumbai South constituency and former bank CEO, Sanyal said she hoped to square off in a debate with her opponent, incumbent Milind Deora from the ruling Indian National Congress. So she dropped her campaign plans and rushed to Mumbai's iconic Express Towers where Deora was scheduled to appear as part of a debate hosted by the Indian Express newspaper.

“He has not accepted a single debate with me this time because every debate we had last time, he got so badly beaten,” she said in March. “But we’ll get him. Don’t worry.”

Articulate and vivacious, 52-year-old Sanyal is running an unusual campaign for India’s 2014 parliamentary elections as a member of the newcomer Aam Aadmi Party (AAP). She lost to Deora as an independent in 2009 and now challenges him again as part of the “Common Man Party.” The AAP promises a grassroots operation that will end corruption in India, though its reach is paltry compared to that of political heavyweights the Congress Party and the Bharatiya Janata Party (BJP).

The odds of an AAP majority are slim. But in a political scene rife with parties, family dynasties and elitist attitudes, the AAP has emerged as a viable alternative with a huge target on its back.

Sanyal’s decision to join AAP might appear to be an unlikely choice. The former banking executive has more than three decades of corporate experience. Sanyal began at British bank Grindlays and eventually joined ABN Amro, which was later acquired by Royal Bank of Scotland.

But Sanyal doesn’t see her successful career and the party’s populist platform as contradictory.

“My reputation in this country and in many parts of the world is a very idealistic banker,” she said.

Sanyal resigned in April 2013 as CEO and chairperson of RBS India to focus on her political career.

Besides ending corruption, Sanyal puts urban development high on her priority list, pointing to metropolises such as New York City and Bogotá as examples on how to build thriving cities. She said mixed-income communities with proper infrastructure and amenities would help add Mumbai to that list.

The self-described “urban child” also took a cross-country tour through 15 states and 120 villages. In rural India, she saw the caste-based social inequalities she once thought were “exaggerated.”

“There, it’s still a reality,” Sanyal said. “We have to bring everyone at least to the same starting block.”

That kind of rhetoric could appeal to Dalits and disadvantaged Indians in Other Backward Castes. But despite a strong showing in New Delhi’s elections in 2013, the fledgling party has yet to gain traction on a national scale.

The AAP formed out of the popular India Against Corruption movement, which fought to pass an anti-corruption measure, the Jan Lokbal Bill. Looking to politicize the crusade, activist Arvind Kejriwal established the AAP in 2012, splitting with colleague Anna Hazare, who wanted to remain politically unaligned.

Popular support for the bill propelled Kejriwal’s election as New Delhi’s chief minister in 2013. But he resigned after just 49 days in office when his bill failed to pass.

Sanyal defended Kejriwal’s decision, saying she would have left the party had he not resigned.

“If [the bill] is so core to what you stand for, and it’s completely clear you’re not going to be able to do it, then you step down,” she said. “And you fight again.”

But others smelled weakness. AAP’s critics now doubt the party’s ability to lead and question its decision to back Kejriwal as its candidate for the 2014 prime minister elections.

Sanyal’s opponent, Deora, said he found the AAP a novel idea when the party first broke onto the scene. But Deora lost respect for them when Kejriwal left his post.

“In politics and especially in a country as complex as India, there’s no room for a quitter,” Deora said.

And the AAP, which vows to represent the interests of the “common man,” has yet to prove itself to the people of India on a national scale.

Ajak Sanak, a 21-year-old Dalit studying in a polytechnic training program in Mumbai, plans to give his vote to the Congress Party. He hasn’t completely closed the door on the AAP, but he’s waiting to see real changes in Maharashtra, of which Mumbai is the capital.

“The AAP hasn’t really done anything in Maharashtra, but if they do something, I’ll vote for them,” Sanak said.

Sanyal finally got her verbal showdown with Deora earlier this month, a debate which also included regional party candidates Bala Nandgaonkar of Maharashtra Navnirman Sena (MNS) and Arvind Sawant of Shiv Sena. The four sparred over how to eliminate corruption and improve security in South Mumbai.

Mumbai’s polls will open April 24.  Voting will continue through May 12 with results expected to be announced May 16.

Sanyal admitted in an interview the AAP’s chances of a majority were low, but she saw her party’s role as a “constructive opposition” — a counterweight to how Indian politics have played out in the past.

“It’s really, really important that the Aam Aadmi Party exists,” she said. “Whether we win or not, the fact that we exist is giving people hope, that change is possible in a peaceful and a democratic way.”