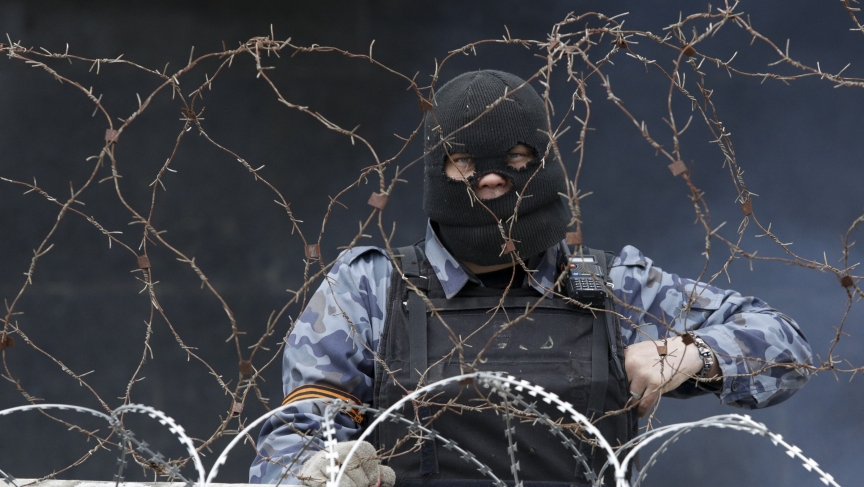 A pro-Russia protester stands at a barricade outside a regional government building in Donetsk, April 10, 2014.

To better understand what's happening in eastern Ukraine, it helps to know what the region was like before the current crisis.

Daniel Drezner does know that. He lived in Donetsk back in the 1990s.

"Imagine the worst aspects of Detroit and Pittsburgh," he says. "It's a coal and steel mining town." Drezner is now a professor of international politics at Tufts University's Fletcher School of International Law and Diplomacy.

He says Donetsk is a place where everyone spoke Russian. He thought it had a Soviet feel to it. And even though it was Ukraine, an independent country, the people identified as ex-Soviet citizens.

Drezner says plenty has changed in the 20 years since he left. But he never thought Donetsk would be a flashpoint for a conflict between Russia and Ukraine. The armed intervention and stories of pro-Russian separatists taking over government buildings surprise him.

"They weren't the most politically active of people," he says. "I remember going down into a coal mine — remember, this is the primary industry of Donetsk at the time — and the environmental and safety conditions were just terrible. But the miners just treated it as part of their daily business."

There just didn't seem to be any indication of future political activism.

Of course, there is a lot of debate over just who is doing the protests. The US says the Kremlin is orchestrating it. The Kremlin says no. But Drezner says it shows that Russian President Vladimir Putin prefers the idea of territorial expansion over any sort of economic benefit he gets from good relations with western powers.

"Or he's gambling that western Europe is so dependent on Russia for gas that he can get away with these moves right now," he says.

But Donetsk is not Crimea. Few think it will be handed over without a fight. That brings up the very real prospect of war.

Drezner thinks there is a 50-50 chance that Russian troops will invade Donetsk. Ukraine will no doubt respond with force. And then it comes down to the length of the conflict. Drezner believes Russia has the upper hand in an armed conflict, since its military is far superior.

"But the key question is, 'How far west is Russia willing to go?'" he says.

According to Drezner, the farther west Russia heads, the more resistance it will face. This includes military resistance as well as insurgency from Ukrainian citizens. But there is another possibility. Drezner says Putin could choose to do what he did in Georgia. Rather than annex the territory, he made them autonomous republics that he essentially controls.

All of this is hypothetical. But that could all change, quickly.

"Whether or not it's being propagated by Russians pretending to be Ukrainians or not, it's a sign that the situation is incredibly volatile," he says.