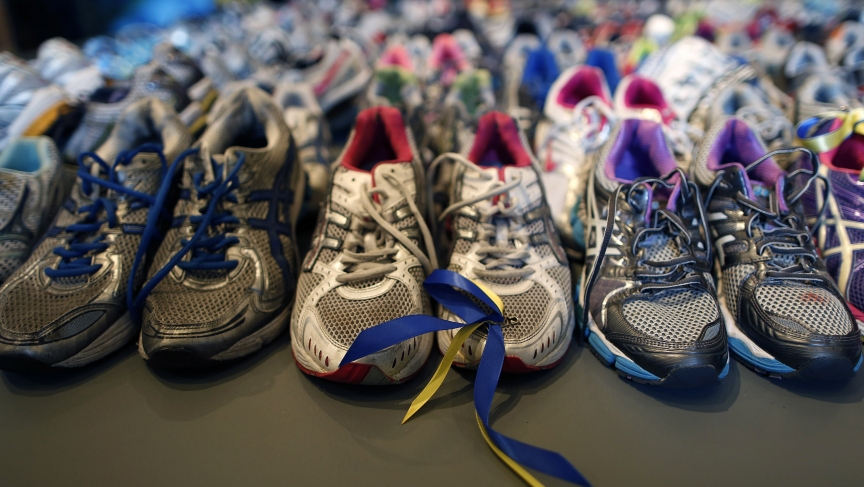 A blue and yellow ribbon is seen on a shoe in a public exhibition of objects and mementos left at the makeshift memorials that emerged in the aftermath of the Boston Marathon Bombings in Boston, Massachusetts, April 7, 2014.

This weekend, Adrianne Haslet-Davis, a survivor of the Boston Marathon attacks, backed out of appearing on Meet the Press. She had asked that the program not mention the names of the men alleged to be behind the bombings. She was furious that the show would not honor her request.

Cannot believe @meetthepress chose to use the bombers name instead of respect their guest. Had to walk off set crying.

It makes sense to me that survivors of the bombing can’t bear to hear their names or see their pictures. I wouldn’t want to either, if I’d been injured or lost a loved one. I can only imagine the pain, let alone the danger of triggering more trauma.

But, as a reporter, I’m wired to ask questions and try to understand events. As I interviewed people about the bombings these past few weeks, I found two distinct camps — those who can’t and won’t discuss the Tsarnaev brothers, the alleged bombers, and those who can and will.

Those willing to discuss them often do so in a quest to figure out what happened and how it might have been prevented. In my mind, neither stance is right or wrong, and both are necessary.

Nick Reynolds and Chris Dobens are in the "won't discuss" camp. They created the Boston Strong t-shirts that have raised a million dollars for the One Fund for survivors. They’ve pretty much stopped paying attention to news about the Tsarnaev case.

“It’s just bringing us back to a negative place,” says Dobens. “It becomes such a hard thing to watch, because we’ve had so much progress in the past year, people trying to move forward. Being brought back to that hurts them. They can’t look at the face of the guy. For some people who were down there, he was right there. They’ve seen him in person. It’s such a PTSD thing. You don’t want to go back."

Dobbins says, for him, it’s not about PTSD. "It’s just being completely dumbfounded and angry. I don’t ever want to see his face. I know it sounds brutal and harsh, but it’s true. Someone who attacked the city I love, I want nothing to do with them.”

“It’s the wrong direction,” chimes in Reynolds. “Boston Strong works because it’s proactive, it’s pushing on, moving forward. It’s so much about recovering that going back to the injury itself doesn’t feel right. I’m almost comically behind on any news about them.”

Yet across the river in Cambridge, where the suspects lived, it’s easy to find people who will talk about them — perhaps because there’s a different kind of anguish for those who knew them.

20-year-old Manuel Matos went to school with Dzhokhar Tsarnaev. “Even though I was angry that someone would do something to innocent people, I couldn’t help feeling some type of sympathy,” says Matos. “I thought, what could possibly have happened to send him over the edge to even want to do something like that?”

Matos teaches teenagers in the media program at the Community Arts Center in Cambridge. He remembers trying to put himself in Tsarnaev’s shoes.

“Even though he’s committed that crime, he’s still a human being," he says. "I know, personally, whatever I did I would not want to feel it’s me against the world. Once you put a face to that bombing, everybody’s against you.”

Even now, Matos says he feels like something’s missing from the story. He doesn’t understand how Tsarnaev could be so well-loved in high school and then commit such a crime. “I don’t think he woke up one day and said we’re going to do this. I feel like someone convinced him to do it.”

That narrative may well be the line Tsarnaev’s defense team takes — that the older brother, Tamerlan, was the hardened and volatile one, capable of true evil, but that the younger one, Dzhokhar, was somehow less culpable, perhaps brainwashed or coerced.

My friend and colleague, journalist Beena Sarwar, has lost countless friends to bombings and target killings back home in Pakistan. Here in Cambridge, she lives a block away from where the Tsarnaevs lived and her daughter goes to the same high school they did.

“I’m conflicted,” she says, when I ask her whether it’s useful or even seemly to humanize the alleged perpetrators. She compares it to the situation in Pakistan.

“I don’t want to humanize the Taliban. I am very resistant to that. Yet you have to recognize these are not aliens from Mars. They are human beings with parents and siblings. These boys were part of this society. They are responsible for their criminal actions, but we do have to look at what drove them to those criminal actions.”

What drove them is a question Natalie Stavas has pondered. She’s a local pediatrician and a runner. She had to stop just short of the finish line last year because of the bombings, but she pushed through the police lines to help treat some of the wounded. At a public forum in Cambridge last month, she told the audience she tries to turn her anger into figuring out how to prevent more tragedies in the future.

“This has to stop,” she says. “The shootings, the massacres, the bombings. I have to put my energy into trying to figure out how, as a nation, we can stop our youth from being so violent. These are pediatric problems. If you look at the literature, if you look at the last acts of violence that have occurred, that have been so tragic, they’re young people. They’re troubled young people who never got intervention. I’m trying to figure out why there’s so much anger and gun violence and stress. I want to figure out how we can stop it.”

Matt Nelson of Cambridge was near the finish line, too, last year. He was on his way to meet his girlfriend. He didn’t quite reach her before the bombs went off. She was hit by shrapnel and injured. He says he tries not to think about the perpetrators.

"Having met someone who actually did die there," he continues, "I focus on the families, and the friends of families of the victims. I’m not thinking about anything else.”