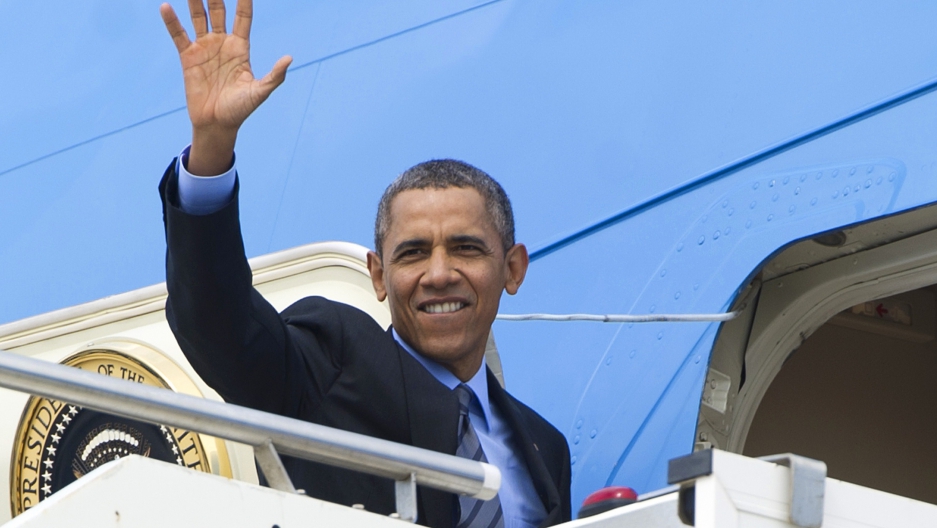 US President Barack Obama waves as he boards Air Force One prior to his departure from Rome to Riyadh on March 28, 2014.
Credit: Saul Loeb
Share

RIYADH — President Barack Obama’s recent visit to Saudi Arabia was low-key, business-like and bereft of scenes that would indicate the country’s almost 70-year-old special relationship with Washington is back on an even keel.

Obama was not received at the airport by a senior prince. The president and King Abdullah bin Abdulaziz were not seen in unscripted moments such as the hand-in-hand walk that then-Crown Prince Abdullah once took with former US President George W. Bush.

And unlike Britain’s Prince Charles, who joined royals in the Saudi ceremonial sword dance during a February visit to the kingdom, Obama’s less-than-24-hour stopover included no lighthearted tableau. The chilly external atmospherics apparently reflected the substance of Obama’s two-hour direct discussions with Abdullah, which featured divergent stances on the civil wars in Syria and Iraq, Egypt’s coup and diplomacy with Iran, according to one policy analyst familiar with Saudi government thinking. Meanwhile the US is moving toward energy independence, importing less petroleum from the region than it has in 20 years and shifting the two countries' economic relationship.

“The impact I was hoping for, I didn’t see it. I was expecting more,” said a young Saudi who works in the office of a senior prince.

And Mustafa Alani of the Geneva-based Gulf Research Center said the Saudis, “were not very pleased. They expected commitments and they got assurances only.”

This was particularly true on “the crucial issue of arms supplies to the Syrian opposition,” said Alani. Obama suggested to the Saudi king that the United States “might basically turn a blind eye” if Saudi Arabia moves to supply the Syrian rebels with anti-tank and portable anti-aircraft missiles under strict controls, he said.

But the US president did not give a firm commitment that Washington would relax what Alani called Washington’s “strong veto” on allowing Jordan or Turkey to provide the land access needed to transport that heavy weaponry into rebel hands.

All in all, Alani added, the visit did not alter the fundamental problem now plaguing the bilateral relationship, which is that the Saudis “have lost trust in this president. They hear him, but they don’t listen to him because it’s become very difficult to take him seriously.”

But the mistrust began before Obama’s presidency, with the 2003 US invasion of Iraq. The Saudis opposed it, warning then-President Bush it would be a mistake. The estrangement grew after other moves by Washington in response to the uprisings that have upended the Middle East since late 2010. First, it did nothing to prevent the 2011 deposing of Egyptian President Hosni Mubarak, a staunch Saudi ally. And last summer, it did not follow Riyadh in wholeheartedly welcoming the military coup that ousted Mohamed Morsi, Egypt’s first democratically elected president.

In addition, the Obama administration has dragged its feet in arming Syrian rebel fighters or taking strong measures to oust Syrian dictator Bashar al-Assad, whom the Saudis want defeated because of his strong ties to Riyadh’s main regional foe, Iran.

Perhaps the unkindest cut of all, in Riyadh’s view, was its discovery that the United States had secretly been talking to Iran for a year before Obama and Iranian President Hassan Rouhani had their famous phone call in New York last fall.

Saudis say their anger is understandable.

“If the Saudis took any actions and did not inform the Americans, the Americans would be angry,” noted Hadi Al Fakeeh, a Saudi journalist now studying in the United States.

Although the current US-Iranian dialogue could lead to the dismantlement of Iran’s nuclear weapons program, which should relieve the Saudis about that menace, they are more worried about something else: That once a nuclear agreement is reached, the United States will further disengage from the region, allowing Shia Iran to meddle even more than it now does in the predominantly Sunni-ruled Arab world.

In other words, the Saudis fear that the “Shia crescent” they see in the region might wax into a “full Shia moon.”

Exhibit #1 is Iraq, where the US occupation led to elections and a new Shia-led government that has disempowered the Sunni minority and given wide access to Iran in this key Arab state. Many Saudis say the United States should reverse this “mistake” by helping them topple Iran’s other Arab ally, Syria’s al-Assad, whose government is mostly Alawite, a Shia-related sect.

“America changed the regional balance in a very negative and irresponsible way” by invading Iraq, said Fawaz H. Fawaz, a newspaper columnist and businessman. “Now, the onus is on them to fix it.”

“We are very suspicious of America’s intentions,” said another Saudi. “My opinion is that Saudi Arabia should not depend on the United States as before...It must be more independent.”

In the wake of Obama’s visit to Riyadh, it is clear that the bilateral relationship is at a turning point and old assumptions that have long underpinned it need to be re-examined. The Saudis, for example, need to accept that the United States, badly burned in Iraq, is not going to act militarily in the Middle East unless its interests are directly threatened.

They also need to jettison certain myths about the United States — that it can control the region’s tumultuous events or that it will ‘abandon’ the kingdom in favor of Iran if the ongoing nuclear talks are successful.

For its part, the United States has to realize that the increasingly well-educated and well-armed Saudis are no longer willing to play the role of handmaidens who follow whatever Washington decides.

Instead, the US-Saudi relationship should be based on realities. One reality is that Saudi Arabia is very important to the United States, not only for maintaining a stable global oil market as dependencies shift but also because of its influence in the Muslim world and its valuable counter-terrorism capabilities and intelligence, which already have helped foil at least two plots against the United States.

Another reality is that although both sides want stability in the Middle East, they are likely to continue to disagree on how to reach that goal. This is particularly true in Egypt, where the United States sees stability arising from an inclusive political process and Riyadh believes that the military junta can bring stability through repression.

Going forward, their bilateral relationship will require far more frank talk, greater patience and closer coordination than in the past.

And maybe an occasional sword dance.

Caryle Murphy’s recent trip to the kingdom was supported by a grant from the Pulitzer Center for Crisis Reporting.