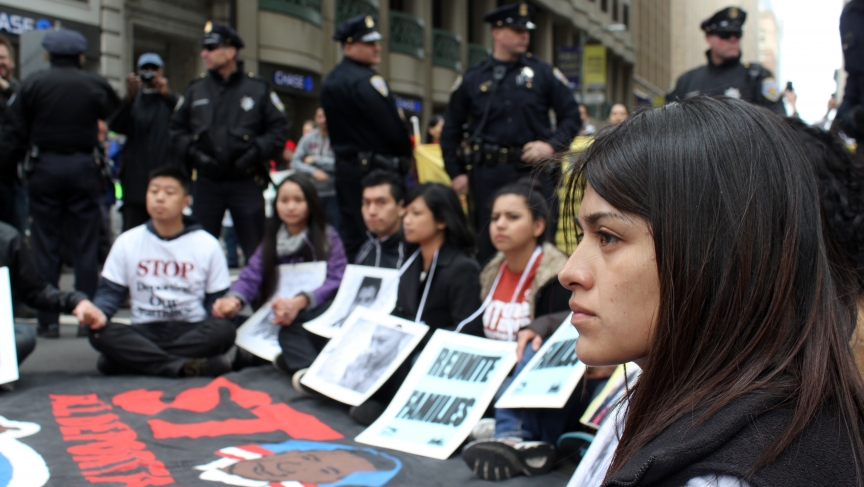 Gabriela García, who crossed the US-Mexico border illegally with her family when she was three, recently protested for immigrant rights in downtown San Francisco. She was arrested and released for her civil disobedience the same day. "I’m undocumented. I’m unapologetic and I’m unashamed," she said.

On a recent afternoon, Gabriela García prepared to do something that her mom would be pretty upset about.

“If she knew, she’d be very worried,” said García, a 23-year-old grad student studying international relations at the University of San Francisco. “But I’ve learned the things to tell her and not to tell her.”

Like García’s decision to take part in a protest that could get her arrested. The plan is she will help block a major intersection in San Francisco to demand immigration reform.

Though García isn't telling her mom about the civil disobedience just yet, she says it’s her mom’s own story that’s making her do it. García was three years old when she crossed the US-Mexico border with her family. It was 1994, and her mother decided to move them all away from Oaxaca, one of Mexico’s poorest states.

Ever since, García’s mom worked to support her kids. She is 65 now and, for the past 10 years, has earned minimum wage working the early shift at a fast-food restaurant. Like many immigrants who entered the United States without authorization, she showed forged documents to get hired. García says her mom fears coming out of the shadows and facing deportation.

“To see the fear and the sadness in my mom’s eyes that have forced her to become shameful of who she is — I can’t turn against that,” García explained. “I can’t pretend that everything is okay.”

And that brings García to a turning point. She has participated in immigrant rights protests before, and has taken the quieter route, too, petitioning Congress to offer millions of undocumented immigrants a path to citizenship.

But now she is frustrated. Reform efforts are stalled in Washington, and she believes that President Barack Obama can do more to stop deportations. García has also seen that things can change. She has benefited from a program initiated in 2012 by Obama called Deferred Action for Childhood Arrivals. It temporarily protects immigrants like García — who came to the US unauthorized as kids — from deportation.

If she can be protected, García asks, then why can’t her mom?

When I first met García, it was a few days before the protest. We headed into an office buiding (that also serves as the headquarters for the local janitors’ union) and joined about 20 other immigrants for civil disobedience training.

Anoop Prasad, a lawyer with Asian Americans Advancing Justice, told the group what they might expect on protest day. Legal observers will be there wearing bright green and yellow hats and armbands. Volunteer immigration lawyers will also be on site to answer last-minute questions demonstrators — especially those without the proper authorization to live in the US — might have if arrests seemed likely.

García asked if she would get fingerprinted if arrested. Yes, Presad said. And he warned: “Having an arrest or a charge or conviction can have immigration consequences for you in the future.”

A woman turned to García and said it was okay to consider backing out. “Honestly, I’ve last minute not done it before because I was scared and that’s okay.” the woman says. She then repeated that in Spanish for the rest of the group.

After, I asked García why protest this way? Why risk complicating her immigration status with a possible arrest?

“People are sick and tired of being sick and tired,” she says, adding that the political debate over immigration is about “blaming the Republicans, blaming the Democrats, blaming someone — blaming, blaming. That’s not going to get us anywhere. People are ready to take it to the next level.”

García isn’t alone. Across the country, immigration activists are on hunger strikes (including outside the White House this week), blocking deportation buses and shutting down city streets.

It’s unclear whether Obama will flex his executive authority to reduce deportations. He recently ordered a review of his administration’s deportation policy, but that is not satisfying protesters’ demands. Obama also faces resistance from some Republican leaders who oppose providing a legal path for undocumented immigrants, and they would likely challenge any unilateral move by Obama.

What is clear, though, is that protests will continue as long as policies remain unchanged.

The morning of the demonstration, I met García on Market Street, San Francisco’s main drag. In case of arrest, she wrote two lawyers’ phone numbers on her forearm in black marker.

“I’m extremely nervous. I’m shaking,” she said. “But I came to realize that I should embrace who I am. I’m undocumented. I’m unapologetic and I’m unashamed.”

A small group of people gathered nearby about 30 minutes before marching. There were students and union leaders, janitors and housekeepers, and families, with several made up of parents from Latin America and their US-born kids (mixed-status families). An elderly man from China distributed signs that read: “THE IRS AGREES MY TAXES ARE NOT ILLEGAL.” Other signs featured blown-up black and white photographs of people recently deported.

When the group swelled to several hundred, the march started. It was short, and only went for a few blocks until it reached its target: a tall building housing an immigration court.

García volunteered to stand on the back of a pickup truck and introduce families facing deportation to the crowd. “These are the faces that are being impacted. We are not just pieces of paper!” she said into the mic. Next, she joined a core group of about 20 protesters in the middle of the intersection. They linked arms and formed a circle around a banner that read “Deporter in Chief,” referring to Obama and their claim that he has deported more immigrants than any other president (more about that claim here).

They chanted “Undocumented, unafraid!” and “Sin papeles, sin miedo!” (“Without papers and without fear” in Spanish.)

Then the police headed in and arrested the protesters one by one and guided them into a police wagon. García was released the same day.

When I talked to her on the phone later, I asked if she had told her mom about what happened.