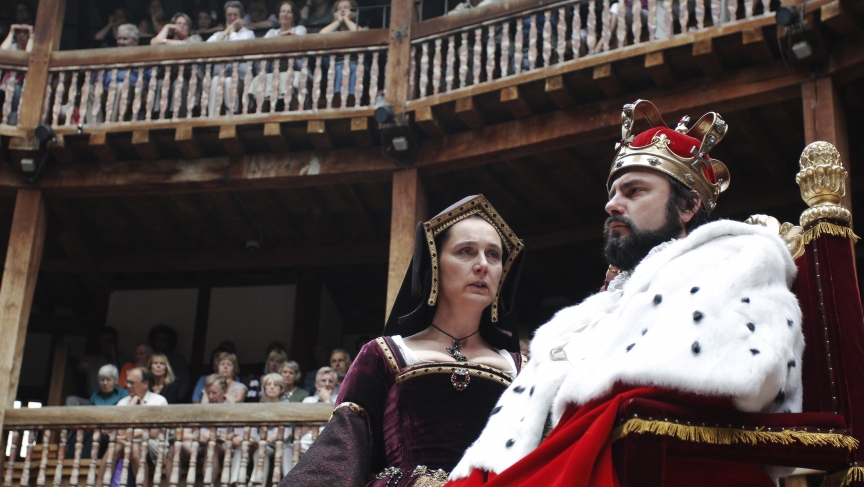 An old article from the Seattle Stranger keeps making the rounds on Facebook among theater people: “Ten Things Theaters Need to Do Right Now to Save Themselves.” Thing #1: “Enough with the goddamned Shakespeare already.”

Writer Brendan Kiley’s rant isn’t anti-Shakespeare, though. He tells theaters, “The greatest playwright in history has become your enabler and your crutch,” and suggests they “find new, good, weird plays nobody has heard of. Teach your audiences to want surprises, not pacifiers.”

Easier said than done. But even if you find the sentiment heretical, it’s worth asking why one playwright — who’d be turning 450 this month — gets so much real estate in today’s theaters.

It’s also curious to note how few plays are ever performed that were written between Shakespeare’s death and 1879, when Ibsen’s A Doll’s House premiered. (By way of comparison, imagine if classical music had no composers between John Dowland and Edward Elgar.)

Is there some alternative canon of classic plays American theaters ought to be presenting?

Christopher Marlowe and Ben Jonson were well-known rivals to Shakespeare, but Elizabethan theater was full of other playwrights. Michael Witmore, director of the Folger Shakespeare Library, recommends Knight of the Burning Pestle, by the team of Francis Beaumont and John Fletcher. It’s about a grocer named Ralph who goes to see a play and, in a twist that strikes us as postmodern, ends up in it.

“It’s a really loopy play,” Witmore says, “kind of bonkers, and I think we would love it if we could see it today.”

He also points to Susanna Centlivre’s The Gaming Table (adapted from her earlier play The Basset-table), “which is about a series of players, in the way we would think of that term now: people who are on-the-make romantically, financially.” The Gaming Table represents a “female playwright doing terrific work, and it works.”

The theatrical executive Howard Sherman thinks Moliere is worth another look, too. “I think we’d like most of the plays of Moliere,” he says. “I have a particular fondness for School for Wives,” which finds the playwright waxing on the ubiquity of "base flattery, injustice, fraud, self-interest, treachery.”

Sherman also thinks we’d find John Ford’s ‘Tis Pity She’s a Whore, from around 1630, wholly contemporary. “I recently saw a production which was striking and as up-to-the-minute and shocking as one could ask for.”

Richard Brinsley Sheridan’s School for Scandal and Oliver Goldsmith’s She Stoops to Conquer, both from the 1780s, occasionally make the jump to the 21st century intact, too.

So why is Moliere little seen outside of French class? Why don’t we have the Oregon Centlivre Festival, or Beaumont in the Park?

One reason is the English Civil War, when Puritan rule devastated English theater — houses were closed and many plays burned. The Restoration era brought hedonism back into style in England.

The ethos in Restoration comedies was, “'I’m going to drink it, smoke it, eat it, sleep with it, whatever! Because I could be dead anytime now,'” explains Heather Nathans, chair of the Department of Drama and Dance at Tufts University.

She cites William Wycherley’s The Country Wife from 1675, the best-known Restoration comedy, about “a man who pretends to be impotent so that he can have fun with all his neighbor’s wives.” It sounds so Hollywood.

Playwrights in that era were "actually writing much more like sitcom writers,” Nathans explains. “They’re churning out material and they are catering to popular taste and in-jokes of the period,” which are “not necessarily going to be clear to a contemporary audience.” Much of it was pretty disposable, too, up until the era of Ibsen, Strindberg, and Chekhov.

The secret of Shakespeare’s endurance is more complicated than great talent, though. Michael Witmore explains that Shakespeare was writing in the era when the printing press was revolutionizing communications. “If Shakespeare had been born 50 years before he was, he would have been a great professional dramatist, but his words wouldn’t have gone so far.”

After Shakespeare’s death, members of his company convinced a group of publishers to take an enormous financial risk on printing his collected works in a volume we know as the First Folio. It was a huge undertaking, at 900 pages.

“Once you put those plays into this revolutionary media format — the printed book,” Witmore says, “its ability to fling words, ideas, and the passions associated with the plays is multiplied.”

So whether Jonson or Beaumont or Marlowe were as good as Shakespeare, the fact is that for hundreds of years after Shakespeare’s death, their works were hard to find — the scripts often in the hands of the actors or managers who last produced them. Putting on Shakespeare was easy: one had only to open a book.

Now we have scholarly editions of Jonson and Marlowe and others, but it’s hard to break the Shakespeare habit. There are so many reasons to keep putting on Shakespeare. We’re in no hurry to throw away that crutch.