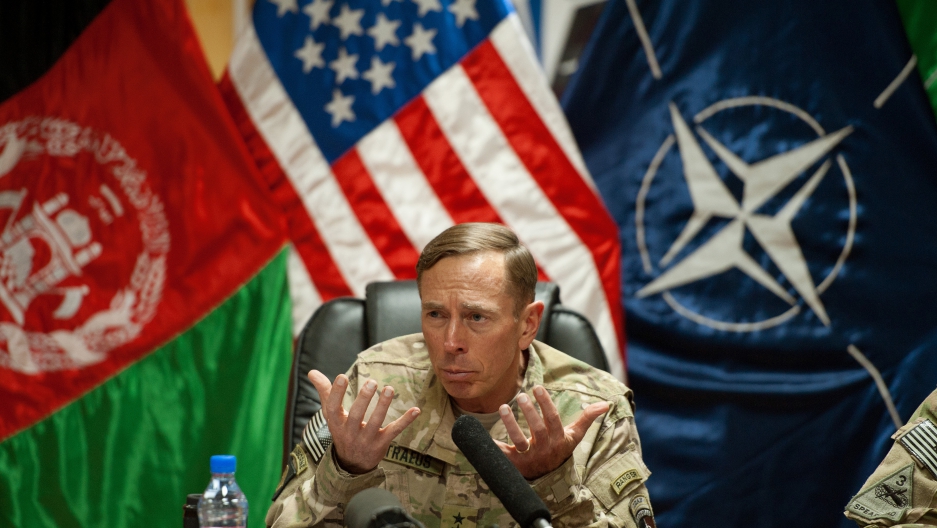 As the clock ticks down to the promised withdrawal from Afghanistan, the US military is trying to figure out how to market the idea that the international intervention has actually accomplished its core mission — bringing peace and stability to a nation that has known little of either for the past 35 years.

The solution: a little Newspeak.

Welcome to the war in Afghanistan.

1. “We are not leaving, we are transitioning.”

These words belong to Gen. Joseph Dunford, NATO commander in Afghanistan, who was at some pains to explain why the beleaguered country would not sink into civil war after the NATO withdrawal, similar to the way conflict exploded after the Soviets left 25 years ago.

In an interview last weekend with the Financial Times in Kabul, the general brushed aside the comparison. “I don’t view what we are doing as withdrawing, so I reject the analogy with the Soviet days,” he said.

2. “Very shortly now the US and the international community ought to be unambiguously committing ourselves to a post-2014 presence in this country.”

Retired Marine Corps Gen. John Allen, who preceded Dunford in the top NATO job in Afghanistan, made this remark this week to the website Defense One.

He has a funny idea of “commitment.”

According to the dictionary, “commit” means to say that someone or something will definitely do something. That belies the fact that the decision is not exactly up to NATO.

The US government, for example, has been dying to “commit” to staying in Afghanistan, but President Hamid Karzai has refused to sign the tortuously negotiated Bilateral Security Agreement (BSA). Secretary of State John Kerry has talked tough, and given Karzai one “firm” deadline after another, which the Afghan president has flouted at will.

Now that Afghanistan’s presidential elections have gone off without too much commotion, it may be possible to “commit” to a post-withdrawal (oops! post-transition) presence in the country, if by “commit” we mean “say pretty please.”

This is a main tenet of “COIN,” or counterinsurgency doctrine, developed by Gen. David Petraeus, who literally wrote the book on the subject.

As Petraeus and his co-author, Gen. James Amos, put it in December 2006: “‘Hearts’ means persuading people that their best interests are served by COIN success. ‘Minds’ means convincing them that the force can protect them and that resisting it is pointless.”

When Petraeus took over the NATO command in 2010, he doubled the number of “kill/capture” missions his forces conducted — operations in which soldiers entered the homes of suspected Taliban insurgents, usually at night, killing or capturing their target.

In reality, the vast number of those captured were later released because they were the wrong people, there was not enough evidence to hold them, or other irregularities. Those killed, of course, could not be so easily rehabilitated.

As a trust-gaining maneuver, it was not all that successful; in fact, night raids were a key stumbling block in negotiations with Karzai over the BSA.

Perhaps Petraeus was working from a different understanding of the term: There is a widely circulated quote, with no certain source, that goes “When you got’em by the balls, their hearts and minds will follow.”

Petraeus was quite a master of Newspeak, and contributed many priceless nuggets to the growing dictionary. One was the “fragile and reversible gains” he was touting for NATO, in March 2011, at a time when the CIA was saying that the international forces were, in fact, losing ground.

As one analyst explained at the time: “Well, most of [the gains] got reversed.”

This favored military expression is supposed to mean that the US cannot hold Afghanistan to its own unrealistic standards. In reality, it has come to mean settling for what can be accomplished, rather than what is necessary.

Is this good enough? Time will tell.

This refers to a memo signed by President George W. Bush in February 2002. The subject line was “Humane Treatment of Taliban and al Qaeda Detainees,” and it set the stage for the “enhanced interrogation techniques” later specified in the so-called torture memos.

These well-equipped but poorly trained militias were created as a US initiative in 2009. The Afghan public protection program, including the Afghan Local Police (ALP), was supposed to enlist ordinary Afghans in the fight against the Taliban. Instead, according to some sources, they have frequently turned into armed gangs that prey on the public they were supposed to protect.

Is this what’s meant by “Afghan good enough?"

This term is defined in the army handbook as “sequential actions that begin with nonlethal force measures (visual signals to include flags, spotlights, lasers, and pyrotechnics) and may graduate to lethal measures (direct action) to include warning, disabling, or deadly shots to defeat a threat and protect the force.”

In other words: shooting a bus carrying civilians in Kandahar, because the driver did not see or understand the signals deployed. Five people were killed, and another 18 wounded, in that April 2010 incident.

But, as US army platoon leader Rajiv Srinavasan wrote in his blog, “Why does it matter that it was a bus full of civilians? ... I’m not here for the Afghan people. I’m here for the American people.”

All Afghan drivers are high, he insists, and “not right in the head.” So it’s natural to be suspicious.

“The risk to just one American life on that morning would have given me enough of a reason to open fire,” he wrote.

So much for protecting Afghan civilians.

That's the official name given to the war in Afghanistan. It sounds so much better than “military action designed to restore US confidence after the shock and devastation of 9/11.”

The invasion was punitive, as President George W. Bush made quite clear when he addressed Congress on Sept. 20, 2001.

“[The Taliban] will hand over the terrorists or they will share in their fate,” he said.

But the Taliban did not hand over the terrorists, nor did they share in their fate.

Osama bin Laden and crew high-tailed it over the Hindu Kush into Pakistan and lived in relative comfort for 10 years, leaving the Taliban and the Afghan people to endure the freedom the US was bringing.

10. Pakistan is our ally

Islamabad has ostensibly been a partner in the war on terror, and has reaped substantial financial benefits for its cooperation. Sure, there was the occasional drone strike that killed dozens of Pakistani soldiers and the US sometimes conducted military operations in Pakistan without notification or permission — think Abbottabad, 2011.

In reality, writes New York Times journalist Carlotta Gall, “the strategy that has evolved in Pakistan has been to make a show of cooperation with the American fight against terrorism while covertly abetting and even coordinating Taliban, Kashmiri and foreign Qaeda-linked militants.”

The US, says Gall, has been “slow to appreciate, and later refused to face [this fact] for fear of setting off a greater confrontation with a powerful Muslim nation.”

Is the US ignoring reality? Or simply blinded by Newspeak?