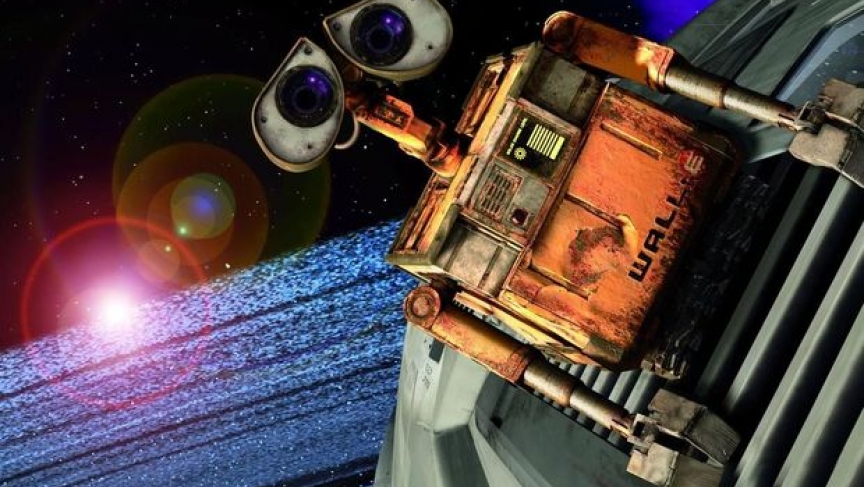 WALL-E blasts off into space in search of EVE (Extra-terrestrial Vegetation Evaluator), the robot of his dreams.

So many children’s stories focus on toys that come to life — from the Nutcracker to Christopher Robin’s Winnie-the-Pooh. But few of those characters were successfully transformed into big screen stars, until Pixar premiered "Toy Story" in 1995.

In the weeks before its release, much of the excitement surrounding the film focused on its pioneering use of computer animation, technology that Ed Catmull, now the president of Pixar and Disney Animation, helped create. Yet today, nearly 20 years after its release, "Toy Story" is primarily remembered as a heartfelt, beloved movie — one that parents enjoyed as much as their kids.

That's the magic of Pixar, a company that has had its share of challenges and setbacks, as Catmull details in his new book, "Creativity, Inc." He says managers and employees there and everywhere are responsible creating a more creative, and ultimately productive and profitable, workplace.

"When I was a kid growing up, Disney was my idol, as well as Einstein," says Catmull. "But I realized when I got into college that I couldn't draw that well, so I switched over into physics. When I got to graduate school, it was the early days of computer animation — we were essentially inventing it. I realized at that time that we could combine the graphics of the computers with art. So I had a goal to make the first feature computer animated film. That goal took 20 years."

Catmull says when he was first starting out, computer animation presented an inspiring creative endeavor that blended the mediums of art and technology. But he eventually realized that keeping up the creative momentum is easier said than done.

"Every time I looked at other creative endeavors, they fell apart after a while. Disney fell apart for a while after Walt died," he says. "I saw this happen all over the place. At the end of achieving this marriage of art and technology, I could see this really interesting problem: How do you keep a group together? How do you keep the creative juices going, and what are the things that get in the way that caused those other things to fall apart?"

In certain ways, says Catmull, blunders, oversights and gaffes can be the key to the creative process.

"If you're doing something new, you will make mistakes," he says. "In fact, if you're not making mistakes, you're probably just copying other things. The way you avoid mistakes is to be super safe. Well, we can't be safe. That means somebody will make mistakes, and we have to say let's learn from it. But you don't bully anybody, or punish them, or 'hold them accountable.' In fact, what you're trying to do is make it safe for them to try something new."

Catmull says Michael Arndt, the writer of "Toy Story 3," compares making a movie to climbing a mountain blindfolded, adding that the hardest part is just finding the mountain.

"[It's] his way of trying to deal with the difficulties of creating the unknown," he says.

Catmull says Arndt isn't the only one who struggles with the unknown. "Toy Story," "Finding Nemo" and "WALL-E" filmmaker Andrew Stanton says it's important to fail as fast as you can, because mistakes are inevitable.

"[Andrew] uses this metaphor that he's a sailor out in the sea and he doesn't know which way to go, but he's got to pick a direction," says Catmull. "Each of these directors needs something to hang onto when they're navigating these unchartered territories."

He adds: "The metaphors are their ways of just grabbing on and saying, 'I'm going to do something while I forge ahead, and I don't know exactly where I'm going.'"