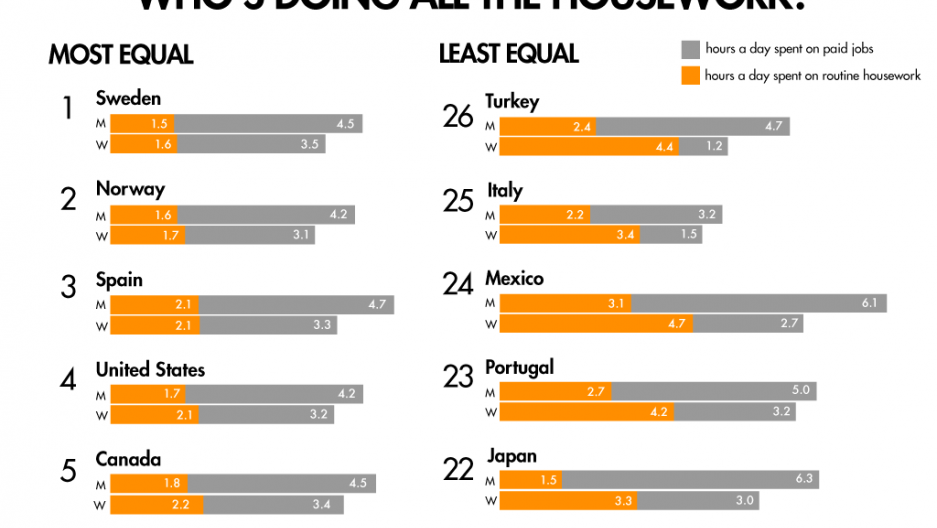 When looking at this data, it’s important to remember that gender equality isn’t just about women working more paid hours or doing less housework. It’s also about men cutting back their work hours to pitch in more around the house. Countries that have lighter workweeks, in fact, tend to have a more equal distribution between men and women in the home.

The OECD compiled data from national surveys of men and women ages 15 - 64, both single and married. Hours spent on childcare were included as unpaid work for the few countries that had comprehensive statistics.

In Scandinavian countries like Norway and Sweden, government regulations keep work hours to a comfortable 37.5 per week (40- to 50-hour weeks prevail in other European countries). This gives Scandinavian men much more time for other activities, including helping around the house. According to the OECD, since long work hours are legally limited, Scandinavian culture allows both mothers and fathers to have time to work and raise a family, without having to rely on traditional gender roles to manage the workload.

This also helps explain why countries like Mexico and Japan make the least-equal list. Japanese men spend as much time on paid work as Japanese women spend on both housework and paid work. It’s unsurprising that men in Japan and Mexico wouldn’t chip in more than an hour or so at home, considering their paid workload.

But in Italy — unlike in Mexico, Portugal or Japan — the division of labor isn’t a question of men not having the time to do housework. With an average of 3.2 hours of paid work every day, Italian men are some of the least overworked in the OECD.

In fact, across the OECD, it’s the women who are generally more overworked than men. When you look at total paid work combined with total unpaid work, women spend an average of 2.6 hours more than men every day on work — at the office, in the community, and at home. The OECD notes that “in virtually every country, men are able to fit in valuable extra minutes of leisure each day while women spend more time doing unpaid housework.”