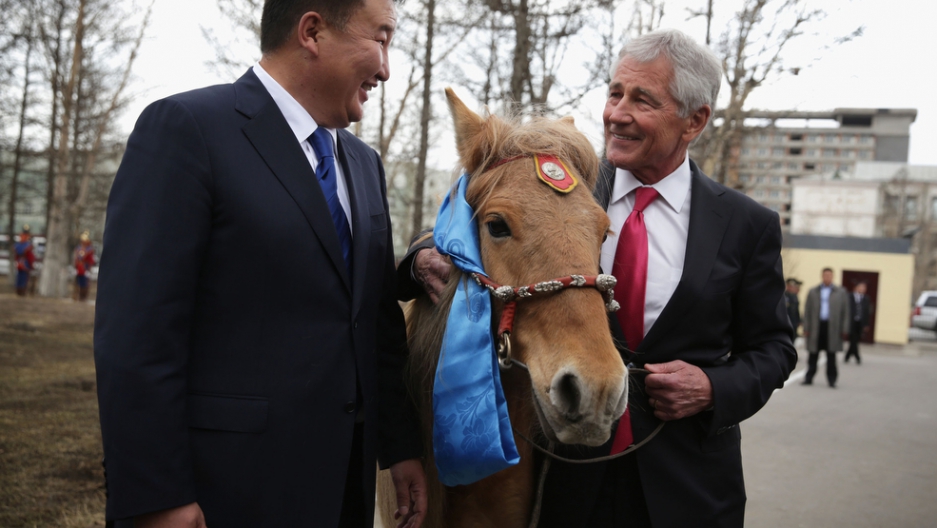 US Secretary of Defense Chuck Hagel is presented with a horse by his Mongolian counterpart, Defense Minister Bat-Erdene Dashdemberel, in the Mongolian capital of Ulaanbaatar on April 10, 2014.
Credit: Alex Wong
Share

Political gift giving is as old as politics itself.

Sometimes the presents are useful, like the two Idaho potatoes US Secretary of State John Kerry gave to his Russian counterpart, Foreign Minister Sergei Lavrov, earlier this year.

At other times they are just plain weird, such as the 500 cases of tinned pineapples Australia sent to the future Queen Elizabeth II and Duke of Edinburgh for their wedding in 1947.

So, given that context, US Defense Secretary Chuck Hagel probably didn’t bat an eyelid when he was presented with a horse by his Mongolian counterpart during a visit to the landlocked country on Thursday — only the second by a US defense secretary.

“It’s a handsome horse,” Hagel said diplomatically as he inspected the nine-year-old dirty blonde horse, which he promptly named Shamrock after his Nebraska high school mascot.

“Unfortunately, I will have to leave Shamrock here for the time being.”

Hagel is not the first American politician to receive a Mongolian horse — a traditional gift in the former Soviet client state — and then leave it behind.

More from Globalpost: Weird stuff world leaders give each other

His predecessor, Donald Rumsfeld, was honored with a black-maned gelding during a visit to the impoverished country in 2005.

Rumsfeld named the horse Montana, but that was as close as he ever got to US soil.

But leaving a gift behind is surely less offensive than stealing it.

Putin denied taking the ring, but offered to make Kraft a replica.