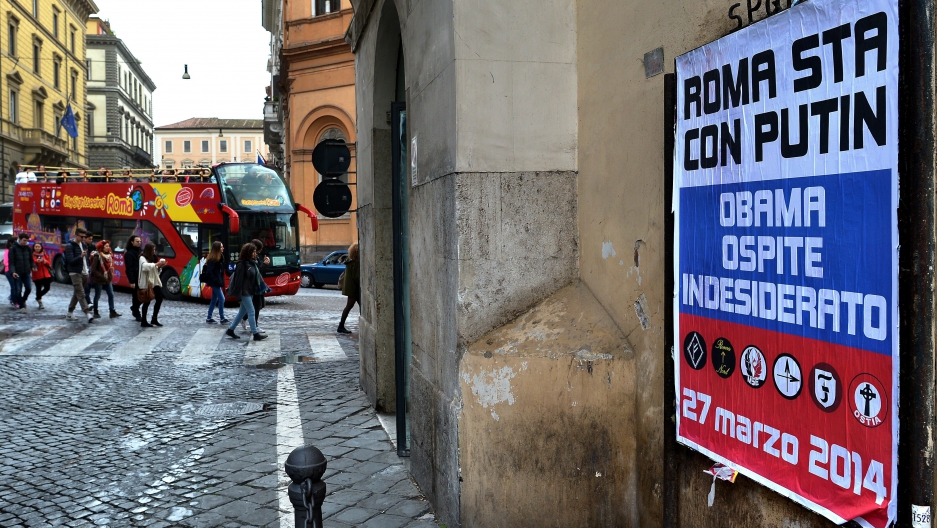 A poster bearing the logos of far-right Italian parties says "Rome is with Putin, Obama is not welcome."
Credit: Alberto Pizzoli
Share

LISBON, Portugal — Vladimir Putin's propaganda machine may relentlessly denounce Ukraine's authorities as fascists and xenophobes, but elsewhere in Europe the Russian leader is energetically courting far-right politicians as allies in his confrontation with Western governments.

"You can see that the National Front is viewed very favorably in Russia,” says Ludovic de Danne, foreign affairs spokesman for radical-right French party. “We are more than tolerated, we are seen as a friend."

He reels off a list of top Russian officials — headed by Deputy Prime Minister Dmitry Rogozin, now under US sanctions for his role in the annexation of Crimea — who lined up to receive National Front leader Marine Le Pen when she visited Moscow last year.

"We have a balanced position. We don't want to be part of any game that pulls us into a new Cold War with Russia," de Danne said in a telephone interview from the European Parliament in Brussels. "Our independent stance is appreciated by those in power in Russia, that's why we have good contacts with them."

The National Front is just one of several radical right parties across Europe providing vocal support for Putin's position in Ukraine, even as Western governments accuse the Russian leader of dragging the continent into its worst crisis since the fall of the Iron Curtain.

Dutch Freedom Party leader Geert Wilders has echoed the Kremlin's line, saying Ukraine's pro-Western government is run by "National-Socialists, Jew-haters and other anti-democrats." In a speech last month to parliament, he blamed "shameless Europhiles with their dreams of empire" for prompting the crisis.

He condemned the Dutch government for supporting an EU financial package for the cash-strapped Ukrainian government, saying the money would be taken from Dutch nursing homes and sent to a "bottomless pit of corruption."

Putin has a clear interest in encouraging such opinion as he seeks to counter pressure from European governments that have joined the United States in condemning his land grab in Crimea and military build up across the border from eastern Ukraine, where pro-Russia agitators this week seized government buildings in several cities.

"During the Cold War, the Soviet Union sponsored communist parties, far-left parties around Europe which basically did the bidding of Moscow and tried to spread certain types of propaganda," says Mitchell Orenstein, political science department chair at Boston's Northeastern University. "Russia today is using a lot of the old Soviet techniques, but this time is finding the far right a better partner than the far left."

Many on Europe's radical right admire Putin's strongman image. Nigel Farage, leader of the United Kingdom Independence Party, last week said Putin was the world leader he most admired. "Compared with the kids who run foreign policy in this country, I've more respect for him than our lot."

Russian media have widely reported his comment that the EU has "blood on its hands" by meddling in Ukraine.

Although Farage has sought to distance his party from some far-right counterparts in continental Europe, UKIP shares their views on rolling back European integration, halting immigration and opposing gay marriage.

Putin's line on such issues strikes a cord with many European rightists.

Last September, the Italian National Front plastered posters around Rome bearing the slogan "I'm with Putin" over a portrait of the Russian leader in military cap.

"Putin," the party's leader Adriano Tilgher posted on Facebook, "has said ‘no’ to the European Union... taken a courageous position against the gay lobby and the world financial centers who wanted a war in Syria."

Putin's United Russia Party sent a representative to a meeting of European nationalists last December in Turin, Italy, that was attended by Wilders, Salvini and Austrian Freedom Party leader Heinz-Christian Strache, among others. Addressing the conference, United Russia lawmaker Viktor Zubarev reportedly stressed shared ideas on the family, nation and role of religion.

De Danne, who also attended the Turin talks, said the French National Front was eager to develop links to Putin's United Russia "which is close to our ideas."

Ironically, the National Front also recently shared close ties with Ukraine's ultranationalist Svoboda Party — whose inclusion in the Ukrainian government with three ministers is used by Moscow as evidence of a fascist takeover in Kyiv.

Both parties were linked in a pan-European grouping called the Alliance of European National Movements. Le Pen pulled the National Front out in 2012 as she sought to win over mainstream voters in France, although some prominent members, including her father, party founder Jean-Marie Le Pen, maintained links until December.

Svoboda withdrew last month over the pro-Russian line adopted by other members, including the British National Party and Hungary's Jobbik party.

In a statement, the pan-European group said Ukrainian nationalists had been "manipulated, organized, funded and armed by sinister forces in the West" seeking to "encircle and dominate Russia."

Jobbik's leader Gabor Vona traveled to Moscow last year to meet with Alexandr Dugin, a former leading member of Russia's National Bolshevik Party — a far-right group whose flag resembles that of Nazi Germany but with a Communist hammer and sickle replacing the swastika.

Dugin, who promotes a vision of a Russian-led union stretching across much of Europe and Asia, is believed to be highly influential with Putin's inner circle.

Last year, he was reported to be in correspondence with Nikolaos Michaloliakos, the leader of Greece's Nazi-influenced Golden Dawn movement who is currently in jail on charges of forming a criminal organization.

European support for the Russian line on Ukraine isn’t limited to the far right. Parties on the extreme left have also been critical of Western backing for Ukraine, along with some mainstream politicians.

Former French center-right Prime Minister Francois Fillon has warned against making Russia "public enemy No. 1." Silvio Berlusconi — who built up a friendly relationship with Putin during his many years as Italian prime minister — has complained that expelling Russia from the G8 "runs counter to history."

However, most mainstream empathy with the Russian position has come from Germany, where pacifist sentiment runs deep and there are strong business ties with Russia.

Former Chancellor Gerhard Schroeder, who has worked with the Russia energy company Gazprom since leaving office in 2005, has expressed "understanding" for Putin and compared the seizure of Crimea with NATO's 1999 intervention in Kosovo. Another center-left former chancellor, Helmut Schmidt, says sanctions against Russia are "just stupid."

Schroeder's one-time foreign minister Joschka Fischer last week denounced his former boss and other so-called "Putin verstanters" (Putin understanders). He warned that without a strong Western response the Russian leader will move into eastern Ukraine as part of a drive to overthrow the post-Soviet system.

Orenstein, the Russia expert at Northeastern University, says Schroeder has been bought out by the Russians. He also suspects Moscow is financing some European far-right groups — especially those in former Soviet bloc states that have joined the EU since 2004.

"The Russians see themselves as fighting a war, a battle for influence in Eastern Europe with the European Union, which until now has been a much stronger force," he says. "The far-right parties are a good partner of convenience for the Russians because they oppose the European Union."

In France, a Kremlin-backed channel station called ProRussia TV is headed by former National Front councillor Gilles Arnaud and anchored by Sylvie Collet, from the Party of France, another far-right group. Its content blends pro-Moscow news on Ukraine with ultraconservative views on French issues.

Orenstein believes Putin is less concerned by Western supporters' ideology than their ability to promote the Kremlin’s views and break down European consensus over opposing his moves in Ukraine.

They’ve been aided by growing support for the far right in several countries.

Jobbik saw its vote share rise to 20 percent in Sunday's Hungarian election. The National Front made significant gains in French municipal elections the week before. If such Putin-friendly parties come to power, they could be a position to veto EU or NATO action against Russia.

"Putin sees this weakness and he's looking to exploit it," Orenstein says. "Europe needs to exercise a whole new level of vigilance."