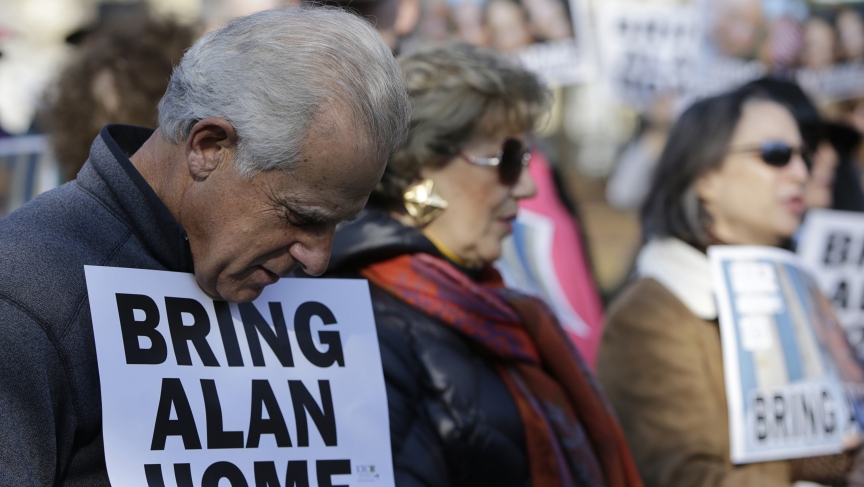 Demonstrators gather during a rally for U.S. detainee Alan Gross in Lafayette Square in Washington December 3, 2013. Gross announced that he's going on a hunger strike on April 3rd, 2014, to protest his 15-year prison sentence in Cuba.

In Cuba, jailed US contractor Alan Gross is now on a hunger strike at a military hospital in Havana.

The 64-year-old from Maryland has been imprisoned since 2009. The Cuban government caught him while on a covert mission to set-up clandestine Internet networks on the island.

That mission was funded by the US Agency for International Development (USAID). It's the same agency the secretly set up a social media network in Cuba called ZunZuneo.

The Associated Press revealed last week that the program was a covert US government initiative aimed at stirring unrest among young Cubans. It's since been shut down.

The revelation, though, has now made his case more complicated.

He's met and spoken with Gross in Havana.

"He has been clear about his hunger strike," Kornbluh says of Gross. "He is more upset at the failure of the Obama Administration to step-up and negotiate his release then he is at the Cubans. And he's very angry at the Cubans."

Kornbluh has met with Gross twice in the last 15-months. He says Gross's frustration is palpable and his mental state is terrible. Gross, it seems, is being pushed to the extreme during the last four years.

"There's been a lot of talk about the amount of weight Alan Gross has lost in his years of incarceration," says Kornbluh.

"But between the first time I saw him and the second time I saw him he had gained 23 lbs. back," he says. "And he made it clear to me that he wasn't just gaining weight and exercising and gaining muscle just for the sake of his health. He had some kind of plan."

Kornbluh asked him if he was planning a hunger strike. Gross said no.

"He was more focused on some kind of, if you can believe it, escape plan."

Gross didn't go through with the escape. Instead, he started his fast. Gross hopes the act will place pressure on the White House to negotiate his release.

But Gross also wants the hunger strike to push the two goverments to have an open dialogue with one another. So far, Kornbluh says the US government has only really made a demand to the Cuban government to release Gross.

Despite the evidence, the US claims Gross was doing nothing illegal.

Secretary of State John Kerry spoke on the matter in testimony to Congress this week. He says the government is focused on trying to get Alan Gross free, adding his treatment is inhumane.