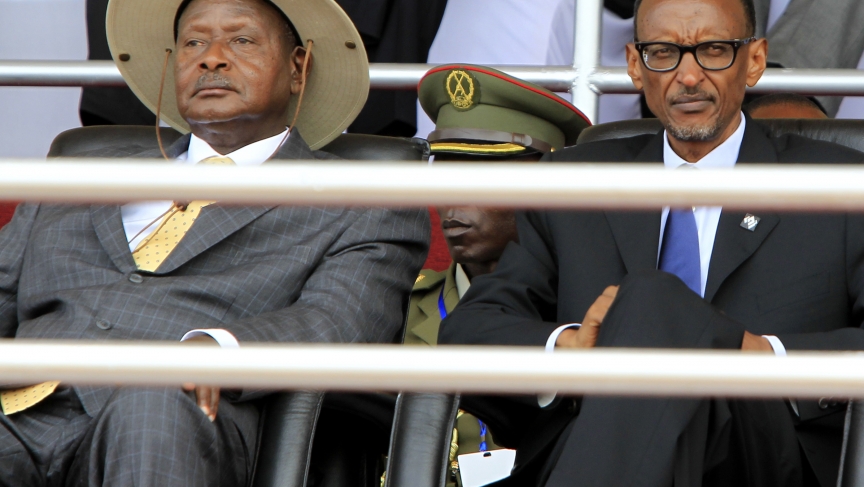 Rwandan President Paul Kagame, right, and his Ugandan counterpart Yoweri Museveni follow the proceedings of the 20th anniversary commemoration of the Rwandan genocide, in Kigali April 7, 2014.

Since the 1990s, the White House has worked with authoritarian leaders across Africa as a means of fighting terrorism. But that tactic has had unexpected and violent consequences, especially in the case of Uganda — according to an article in the New York Review of Books.

The story details alleged killings of politicians, corruption on a massive scale and a general effort to consolidate power in the hands of Ugandan President Yoweri Museveni and his family.

The source for these allegations is an unlikely one: a former general and head of the Ugandan equivalent of the FBI and CIA. He fled the country when he heard he was on a list of targets for assassination.

Wigs, jewelry and a horrifying toothache are among the things a CT scan of a mummy can reveal

The Telegraph reports on new findings from a project to put a number of 3,000-year-old ancient Egyptian mummies through CT scanners. Among the early results are incredible details on how people lived and how they died. Take Tamut, a singer in a temple in Luxor. In Egyptian art she's depicted as a young woman with flowing, dark hair. But according to the CT scan, she was in her 40s, suffering from a poor diet and had incredibly closely cropped hair.

But not all of the discoveries have been so mundane. Scientists also discovered that one mummy still had s spatula lodged in its skull after it was used to scoop out its brains.

Sometimes it just makes sense to move into jail with Dad

Tacloban is still struggling to recover from Typhoon Haiyan, which leveled the town last November. One of the structures that's still standing, or at least hasn't been totally wiped away, is the local prison. So, in at least a few instances, the families of inmates have actually moved into the prison.

PRI's The World has a story about one family that has been separated for more than a decade, but finds themselves back together now — in prison.

Der Spiegel recently completed an investigation into how the Italian mafia has spread its influence from its base in Italy across Europe, and particularly into Germany. Critics allege the German government hasn't done enough to clamp down on Mafia crime, allowing it to flourish. The Mafia seems to have established a base of operations in the construction industry — a situation that would be familiar to American prosecutors. According to the report, at least 460 mob members live in Germany, most in the state of Baden-Wurttemberg, followed by North Rhine-Westphalia, Bavaria and Hesse.

About two years ago, German prosecutors made waves when they seized a collection of art all believed to have been stolen by the Nazis and hidden away for decades. But, it turns out, the more than 1500 pieces of art may all go back to the man who had them — because of quirks in German law. Unlike many countries, there's a 30-year statute of limitation of prosecution for art theft — and there's no exception for art stolen during World War II. So, people who believe the art belonged to them or their families are being given a year to prove their claim, else Cornelius Gurlitt will be getting back the art his father, Hildebrand Gurlitt, collected on Hitler's behalf during World War II. PRI's The World reports.

This is what flower fields look like from above: http://t.co/uXg0TsT7Kn #Netherlands pic.twitter.com/fIXtoFvgzD

Tropical cyclone Domeng, also know as Peipah, has weakend, but it's still churning toward the Philippines. threatening to bring flash flooding across the eastern part of the island nation, according to the Philippines Star. Mudslides may be a risk as the slow moving storm churns past, the fourth storm to batter the country this year.