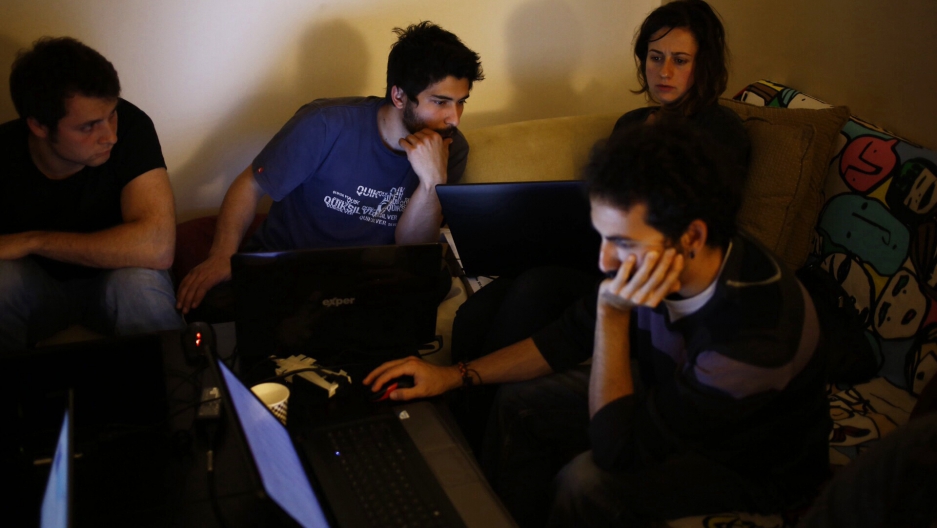 140journos continued their monitoring in an Istanbul flat on March 31, when ballot reports began coming in.
Credit: Ogulcan Ekiz
Share

ISTANBUL, Turkey — Spread around a tiny living room in an Istanbul flat are laptops, cell phones, projectors, and almost three dozen social media activists. This group, which spent all day monitoring Turkey's contested local elections on March 30, re-assembled in a matter of hours after the governing Justice and Development Party (AKP) declared its victory in the early morning of March 31. Their mission: to carry out a citizen-run investigation into election fraud.

Named after the 140-character limit on micro-blogging site Twitter, 140journos gained prominence after Istanbul’s Gezi Park protests last year. It has since grown to a network of over 300 citizen journalists, all volunteers, based throughout Turkey. The group uses Twitter, as well as Facebook and micro-video sites like Vine, to gather and verify local news. According to Ogulcan Ekiz, one of the group’s founding members, 140journos’ verification process has earned it the trust of much of Turkey’s youth, who see biases in traditional Turkish media.

On the day of Turkey’s local elections, 140journos set up an election-monitoring hub in an undisclosed location in Istanbul. Twenty citizen journalists — who have day jobs ranging from radio hosts to chefs and engineers — gathered in a small room to collect, verify and tweet news alerts about polling stations, protests, and unofficial election results. Four people were "mining" on social media — digging for stories that 140journos may have missed — while two designers created colorful infographics based on news they gathered.

The day was filled with reports of ballot-stuffing, police intimidation, and prolonged power outages in provinces with close races.

On March 30, members of 140journos gathered in an undisclosed location in Istanbul to monitor timely election news. (Courtesy: Ogulcan Ekiz)

Besides dealing with unreliable internet services, 140journos also had to circumvent the Twitter ban imposed by Erdogan’s government on March 20, ten days before the elections. “We were still able to get on Twitter, but it slowed us down because when you connect through a VPN [virtual private network], it’s really slow,” Ekiz said. There was a lot less content for the group to work with and a significantly smaller audience to broadcast to, he added. In a victory for social media activists, a constitutional court in Turkey has since ruled the Twitter ban illegal.

140journos’ work comes amid worrisome press freedom developments here. YouTube has been banned since March 27 in the country, which has the highest rate of jailed journalists in the world. Several online news outlets, including opposition-aligned Today’s Zaman and Cihan News Agency, were inaccessible in the hours after polling closed last Sunday amid rumors of cyber attacks.

Since the election, 140journos has been attempting an unprecedented task: verifying each and every polling station’s voting results via crowd-sourcing. Using members’ personal networks and social media tools, the group has been requesting original photos of ballot reports for every one of Turkey’s 194,000 polling stations.

Ballot reports are the results from individual polling stations that list the number of votes for each candidate or party. To get original photos of these summaries, 140journos reached out to as many poll workers as they could from within their networks, which is why most of the ballot reports received are from Istanbul or Ankara. The group also issued public calls via Twitter, Facebook, and its website for people to send in photos of ballot reports they were able to acquire. 140journos has been comparing the original photos of ballot results they receive to the reports made public by Turkey’s Supreme Electoral Council (SEC) — and according to Ekiz, the numbers don’t match.

“There were ones that had, I think, just mistakes, like one or two votes missing,” he says. But other polling stations’ original photos differed dramatically from the results reported by the SEC. “For example, in one ballot report, AKP got 137 votes and [opposition group] CHP got 165 votes — and the election center put something like AKP got 237 and CHP got 65.” Ekiz noted that most of the official records, but not all, “were bent towards being pro-AKP.”

The AKP has firmly denied any instances of fraud. “Frankly, I am quite surprised at this question,” said Abdullah Eren, vice president of the AKP’s Istanbul youth branch, when asked about accusations of electoral tampering. “To me, it seems unrealistic to even consider any fraud on the part of the AKP.” He said he hadn’t heard of any fraud allegations “that were taken seriously by the public.”

But other parties have taken up 140journos’ data as evidence. “We have reported the irregularities to all parties, including opposition parties, and they used the numbers and our reports in their legal complaints to the SEC,” 140journos co-founder Engin Onder said. The main political party following up on the discrepancies is the CHP, which has objected to ballot results in both Istanbul and Ankara and has brought a legal case against the SEC in these cities. Onder says 140journos is tracking more results as original ballot photos continue to flow in.

But 140journos hasn’t stopped there. Exactly one week after the elections, the group launched a new tool on its website that allows anyone to compare the SEC’s ballot results with over 4,000 additional original photos from polling stations. “The idea, of course, is not a closed-circle group evaluating this,” Onder said. “The idea is we are doing this in a crowd-sourced way.”

“We wanted to ask, what’s the power of social media? What if we open this to people and let them check their own ballot?” Ekiz said. “It will be a moment for the Turkish public to check its own elections. This is the new thing.”

An act of citizenship: counting your own vote

Both Ekiz and Onder speak proudly of 140journos’ ethos. “When we started, our goal was to share news, without any bias, in a way that every group in Turkey can consume,” Ekiz said. “Basically, we put what’s happening in front of people’s eyes.”

“Turkish mainstream media are following us closely, because we do what they don’t do,” Onder said. He added that those outlets are either too influenced by the government or too biased in their reporting, neglecting to provide neutral news coverage. “We provide raw material, raw information. The idea is that everyone should be able to access just one kind of data.”

Onder says this has garnered support for 140journos across the political spectrum. Because the group is dedicated to publishing “raw news” without commentary, they have gained Twitter followers who are pro-government, leftist, and pro-opposition. 140journos doesn’t have a political affiliation, and its members range from the disillusioned to the politically conservative, which according to Onder allows them to coexist and build tolerance toward different groups: “Normally, there is no media able to attract those kinds of different views,” he says.

Government pressure still hasn’t reached 140journos. Ekiz believes that may be because the Turkish government spends more time jailing "real" journalists — people employed by newspapers, television stations, and other traditional media — than hunting down Twitter activists. Asked whether 140journos’ members hide their identities  for protection, Ekiz stressed that the group has no anonymous members. “It was our code from the beginning, because we were not doing anything illegal. There is no reason to cover ourselves,” he said.

After a trial run last week with the ballot-checking mechanism, 140journos says it’s ready to test its methodology on the big fish — this August’s presidential elections.