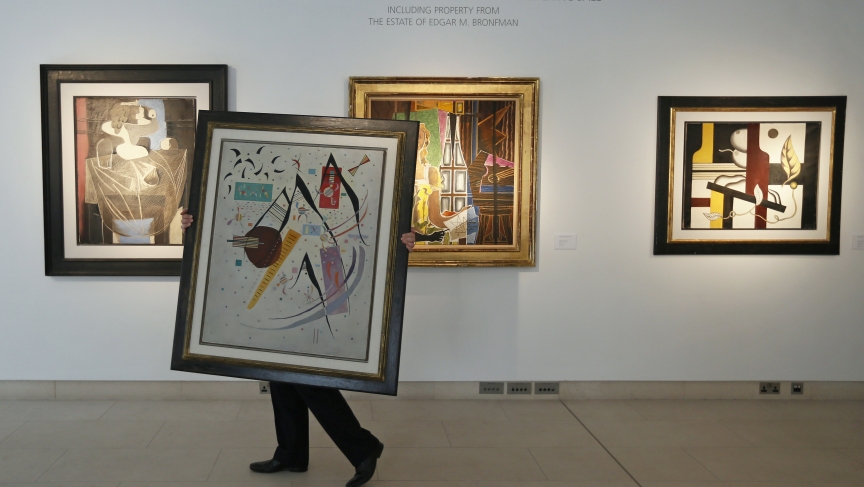 A man carries "Schwarze Spitzen" by Wassily Kandinsky from 1937, on display at Christie's auction house in London March 28, 2014. The painting is expected to fetch $4 to $6 million when auctioned in New York on May 6.

A few days ago, there was an accident in the art world — a case of disappearing ink.

A painting called "Snowy Mountain" by Chinese artist Cui Ruzhuo was recently auctioned off in Hong Kong. The buyer paid about $3.7 million for it, but just two days later, it went missing. It may have actually been accidentally tossed out with the trash, but that's not confirmed.

When you’ve been in the art world as long as Philip Hoffman, mishaps with priceless works of art come with the territory. Hoffman is the chief executive of the Fine Art Fund, a company that facilitates art purchases for hundreds of collectors and investors, works that cost up to $80 million each.

This isn't the first time priceless art has been destroyed by accident. Hoffman has seen quite a few mishaps over his career. One particularly memorable incident occurred with a Rembrandt sketch.

“The owner was so worried about it, he had it put into a huge crate and delivered to the back door of Christie's [auction house],” Hoffman explains.

Unfortunately for the owner, the sketch was so small that when the crate was delivered, someone assumed it was empty, and shredded the paper along with the crate.

“That was the end of one Rembrandt drawing,” Hoffman says.

During the transportation of another painting, a forklift truck drilled two holes into a $3 million Miro painting that belonged to a client.

“I burst out laughing,” Hoffman says, “but I realized afterwards it wasn’t a joke.”

Casino owner Steve Wynn was hosting a party after selling a $130 million Picasso painting. As he was bragging about the piece to an attendee, “he put his elbow straight through the middle of it.”

The insurance company only paid out $50 million, instead of the full price of the painting.

"If you’re clever, you’ll have a policy that the insurers will pay out all of the loss, but if you’re not very clever or if you’re underinsured, they won’t pay out anything,” Hoffman says.

The art's packaging has also led to some mishaps. One of Hoffman’s clients received a Christo piece created out of polythene and string — materials often used in shipping.

“The recipient of it thought that the polythene and string was the wrapping,” Hoffman explains. ”They very kindly undid all the string and the wrapping, and found nothing inside.”

The process can be daunting, especially with millions of dollars at stake, but that hasn’t stopped Hoffman from picking up $5 million Degas pieces or anything else of immense value.

“As long as one’s responsible and you know what you’re doing, it’s not impossible to pick up a work of art. You’ve got to hang it; you’ve got to put it on the wall. You’ve just got to be super careful when you’re doing it, especially at these types of values.”