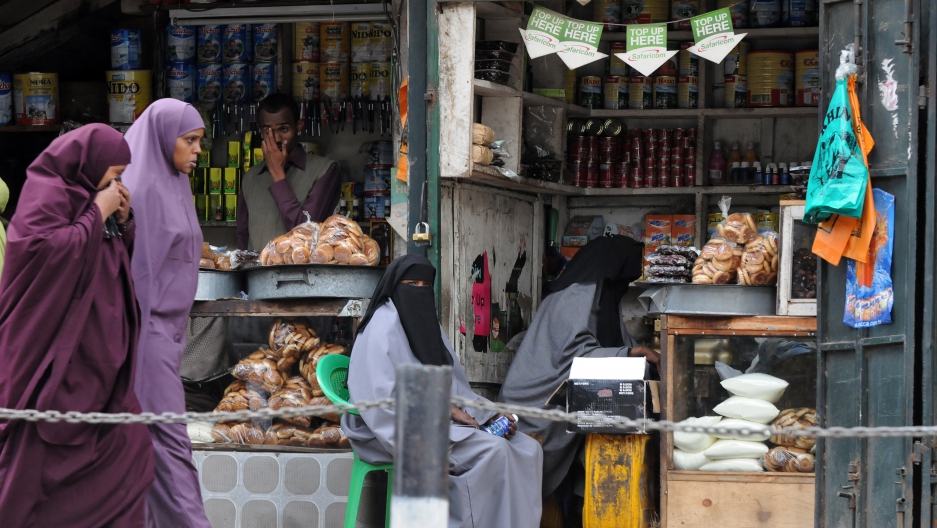 Residents of Eastleigh, a neighbourhood of Nairobi known for it's densely Somali origin population, walk on January 18, 2010 in a business street of Eastleigh. Kenyan police detained 300 illegal Somali immigrants during a sweep that followed a deadly protest at Nairobi's main mosque.
Credit: Simon Maina
Share

Six people died in this neighborhood last Monday, when three explosions tore through two restaurants and a clinic at rush hour. More than 600 people were arrested the following day. But that's business as usual in Eastleigh, a Somali-dominated suburb of the Kenyan capital.

Nicknamed “Little Mogadishu” for its immigrants, Eastleigh is unusual: Seen as a source of terrorism, it’s also a target for terrorists.

Fresh violence means residents of Eastleigh must brace themselves anew for profiling and harassment from the Kenyan authorities, while fearing being caught in the attacks themselves.

"Life has become hard for the Somali people since the Westgate attack," said Ahmed Ali Abdikadir, a shop owner in Eastleigh, referring to the attack on an upscale Nairobi shopping mall by gunmen with hand grenades and AK-47s in September. Somalia-based Islamist militant group Al Shabaab claimed responsibility for the siege, saying the killings of more than 60 people were retaliation for Kenyan military presence in Somalia.

Nobody has claimed responsibility for last Monday's attacks — nor for the March 23 attack on a church in the coastal city of Mombasa, where gunmen opened fire on the faithful — but eyes will again be on Al Shabaab, and on the Somali community in Kenya, whether refugee, immigrant, or Kenyan with Somali heritage. In what could be a sign of broader conflict on the way, last Tuesday night radical Muslim cleric Abubakar Shariff Ahmed, allegedly a supporter of Al Shabaab, was shot and killed in Mombasa.

"We are living in fear," Eastleigh area parliamentarian Yusuf Hassan told reporters at Kenyatta National Hospital on March 30, where he was visiting a baby shot in the head in the Mombasa church attack. "The group [Al Shabaab] has proved to be all over the country, but as a government we will fight them to the end."

Hassan — a Kenyan national with Somali roots — was himself injured by a grenade attack in Eastleigh in 2012.

Since Westgate, police harassment of Somalis in Kenya has been at an all-time high, Eastleigh residents said.

"We have security checks all over Eastleigh," said Abdikadir. "When you are caught without an identity card, you are suspected of being a member of Al Shabaab."

Abdikadir, like so many others, has been arrested for alleged Al Shabaab involvement, but was released after two days upon paying a fine of 2,000 Kenyan shillings (around $23). Two waves of arrests in Eastleigh over the most recent attack — more than 600 arrested the day after the attack and about the same number detained the following weekend — prompted the UN’s refugee agency to express “concern” on Monday.

"There is this cycle of always coming back to see Somalis as the handy scapegoats," explained Neil Carrier, a lecturer at Oxford University whose research focuses on Eastleigh. "I would imagine it will keep on like that, unless there is some sort of radical change in the way the international community deals with it."

Nazlin Ummar, the chair of the National Muslim Council in Kenya, says the prejudice is extended to all Muslims. "After the [Westgate] attack, women wearing hijabs could not enter matatus [public minibuses], or were being beaten in matatus," she claimed.

Interior Cabinet Secretary Joseph Ole Lenku, contacted by GlobalPost, denied security forces were targeting Somalis and Muslims — only criminals, Lenku said. However, he stressed his belief that poor control of refugees has added to Kenya's security problems, and that keeping refugees in distinct neighborhoods would ease the situation.

“The refugee settlements will be continuously scrutinized by our security agency to ensure citizens are protected at all cost,” he said.

Following the Westgate Mall attack, the Kenyan government ordered Kenya’s Somali refugees repatriated to war-torn Somalia. After the Mombasa killings the government ordered Somalis without proper documentation to report to the already overflowing refugee camps in Dadaab and Kakuma in northern Kenya, where problems with health, sanitation, and crime abound.

The National Muslim Council's Ummar has declared measures like the repatriation order human rights violations, due to the uncertain fate that awaits the refugees returning to Somalia.

The crackdown has intensified demand in the refugee community for identification cards, secured through means both legal and illegal.

Abdikadir is one of many to mix distaste for the profiling with support for the objective: He’d like to see terrorism eradicated in the area.

"It is true we are being targeted randomly, but tighter security might mean we are able stay here," he said. "I am afraid of the Al Shabaab and pray the government kills them all."

"Kenyans are a very peace-loving people,” said Ummar. “But when Muslims are being shown to be so hateful to the other communities, of course the rest of the Kenyan people will start alienating them."

Some say the Somali community must reject Al Shabaab and show full cooperation with government security campaigns — even if it means complying with orders for urban refugees to move to refugee camps.

"Somalian [sic] members of Al Shabaab have made life more difficult for Somalians in Kenya than the security forces ever did," said Eastleigh Muslim community leader Sheikh Ismail Haji Ahmed Komora. "I would advise all Somalians living illegally in Kenya to go to the camps, because they will be detained by security forces otherwise."

But he cannot support the repatriation order, he said.

Neil Carrier posits that large-scale measures such as the urban refugee directive may merely be “posturing” by politicians perceived as “weak” after Westgate, and may yet be scaled back. "In terms of sheer practicality, what facilities will there be for all the extra mouths to feed and accommodate in Dadaab and Kakuma?"

More worrying, Carrier said, is the part of the urban refugee directive that asks Kenyans to report on undocumented Somalis living in the cities, and which may encourage ordinary citizens to engage in profiling activities such as the hijab discrimination Ummar saids occurred on public buses.

"With this kind of encouragement for Kenyans to report on any urban refugee there is the chance that more blanket ideas, more prejudice against Somalis will be ratcheted [up]," he said.

For locals like shop owner Abdikadir, life must go on.

"I cannot go to Somalia, there is the civil war," he said. "I stay in Eastleigh because I have no place to go."

Update: As of Wednesday, Kenya has repatriated 82 of the several thousand Somalis detained in the past week.