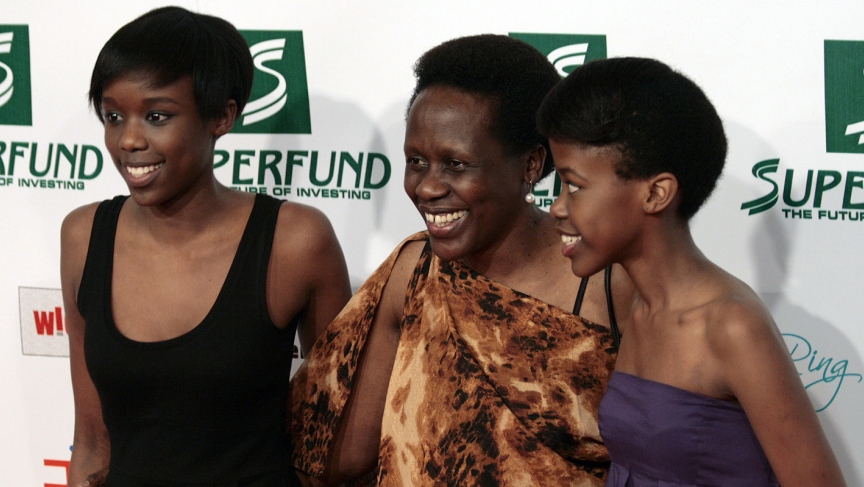 Esther Mujawayo and her daughters Amelia and Amanda.

Esther Mujawayo and her three daughters have thought a lot about forgiveness, when it’s possible, and when it’s not.

Mujawayo’s husband perished in the killing frenzy that gripped Rwanda two decades ago. The genocide claimed more than 100 members of her extended family. The girls lost their father, their bedridden grandmother, their aunts, uncles and little cousins.

As Rwandans gathered this week to mark the 20th anniversary of the slaughter, and the country’s leaders again called for forgiveness and reconciliation, survivors like Esther and her children are left with questions.

“What is forgiveness? Forgive who? Who has asked me for forgiveness?” asks Mujawayo, who now lives in Germany with her three daughters. She says an obsession with forgiveness is the purview of “authorities, NGOs, people who want to think we are human beings, that we are good. But no, we were not.”

During the chaos of the genocide, Esther managed to bribe a Rwandan soldier, and she and her three children eventually found safety in neighboring Uganda. In 1999, she and the girls relocated to a small town outside Dusseldorf, where Esther now works as a psychotherapist counselling refugees.

Her three girls are all in their 20s now and live in Berlin. Amelia - the middle daughter - says the family never stopped talking about 1994.

"We're very lucky that mum - even if it pissed us off sometimes - that it was always present. So the whole time when we were growing up we were always processing it. Of course it is a burden, but we saw the different stages of coping with it, the way she dealt with it. So we learned to deal with it very early in a way that doesn't stop you living," she says.

Though the family left Rwanda, Esther still made regular visits back, determined to find the remains of her family. In 2005 she came face-to-face with those who killed her sister Stephanie, and Stephanie's children.

"It was surrealistic. I was really thinking, 'Are we dreaming?' They deny everything, they deny everything,” she says. “They were also lying to us, not telling us. We opened so many holes thinking this is where they are. And it was very very painful experience. But we have no choice. We have pass through that so that we can bury them."

It was common, during Rwanda's genocide, for the killers to throw victims' bodies into pit latrines. Stephanie's neighbors didn't seem willing to admit to doing that.

"Finally, one of them stepped forward to tell us in which latrine they have put them. We found Stephanie's small bag. And in the bag was the ID card. And the identity card was still okay because it was plasticized. So at least we were sure that now we have got them out the latrine and we give them a proper human burial,” she says.

Esther sets aside her skepticism about forgiveness when it comes to one killer.

“The one who told us actually where they have dumped Stephanie and the children … He said, ‘If you can forgive me, forgive me. If you can't, I will understand it.' That man, Pierre, I give him his forgiveness … But for the others, those who were with him, they were just laughing. What am I to do with someone laughing - without any remorse?” she asks.

Esther says finding her sister's remains gave her some relief. But learning the story of what happened to her husband, Innocent, brought more pain. For years, the family thought that when they were still hiding in the school they had listened to the actual gunshot that killed Innocent.

“A long, long time after we discovered that when we heard the shooting it was man who tried to escape from the group of my husband. And then they were shooting him,” she says.

The family found out years later just how ruthless Innocent’s murderers were.

“The killers say they are tired they don't want to work again. But they were afraid that they will run away like the one they have been shooting. So they cut the feet,  and let them bleed until the morning they came to finish everybody,” Mujawayo laments.

Esther's daughter Amelia says she didn't learn the story of how her father actually died until she mustered the courage to read a memoir her mother had written.

“I stopped at that part and didn't read if for years and I just finished it last summer, almost 10 years later,” Amelia says.

Esther is still wrestling with whether or not to try to find the men who killed her husband.

“I heard one of people who was killing in our place, he's now free in Belgium. And I'm wondering: Am I going to make research and try to find him? And the next day, I'm tired and I don't want to go into it - because from the experience of what is going on with my sister, (I know) they can hurt you so much.”

Anna is certain she doesn't want to try to find her father's killers.

“I'd prefer to know that someone did it, a faceless, soulless person that I don't know. But if I had a face to that person, it would make it harder for me. I’d much rather save it in my head as monsters that did it, not a real person, with a story and a family. I just don't want to go there,” she says.

For Amelia, the trauma is "something she'd like to put behind her." Yet she admits Rwanda’s past is "deeply part of her biography."

She and her sisters still visit Rwanda. They say they can imagine their mother moving back there one day.

As for Esther, she says she's found some sort of peace of mind.

“You have to learn again to trust, to reconcile yourself, your life, come to the point where you say this life is worth it and I have the right to live again,” she argues.

But as for reconciliation between victim and perpetrators?

That, Esther says, is too much to ask.