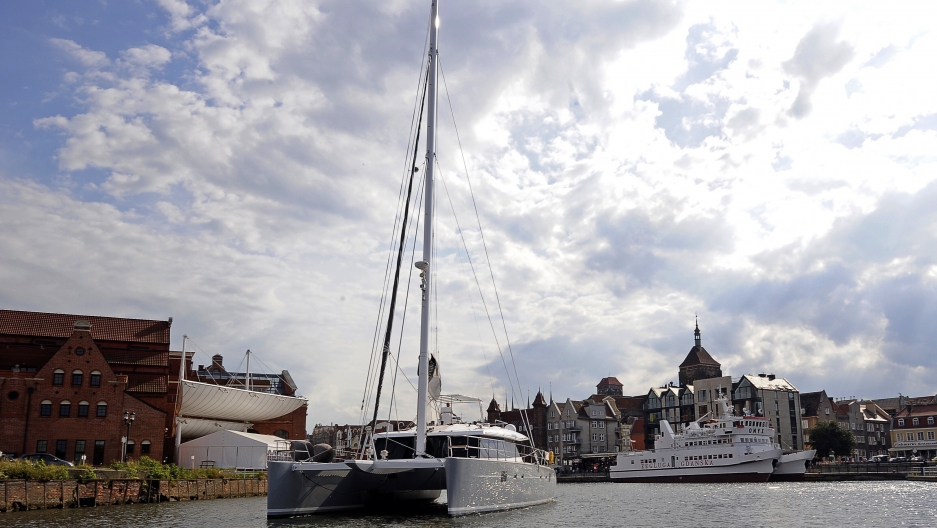 A Sunreef catamaran in the Gdansk harbor. Founded in 2000 by a French father-and-son team, the company has tapped into generations of Polish ship-building expertise.
Credit: Janek Skarzynski
Share

For some, they are monuments to a golden age for the shipbuilders who fought for the right to form an independent labor union and eventually helped spearhead the communist collapse in 1989.

Among them, 54-year-old Zbigniew Stefanski stood on the barricades during the first strikes led by union leader Lech Walesa against the communist authorities a decade earlier. “I was arrested more times than I can remember,” he says. “Once I was beaten so badly my own mother couldn't recognize me.”

But the sacrifice was worth it. “There was a big victory,” says the gaunt, weather-beaten worker with a deeply lined forehead and a graying goatee. “There were great hopes.”

However, the painter at the former Lenin Shipyard — which was partially privatized before filing for bankruptcy in 1997 — quickly becomes wistful.

Poland has experienced a remarkable economic boom since it started on the path to democracy in 1990.

But it’s also seen a growing divide between those who managed to prosper and others like Stefanski who feel they’ve been left behind. He says he lost his home as well as his wife because of troubles with the law and low wages.

The division is clear right here in the shipyard, part of which has been taken over by Sunreef Yachts, which builds luxury boats. For young Poles of the post-communist generation such as 28-year-old Lukacz Lorkowski, whose father once worked in the state shipyards, the rusting cranes are symbols of a broken past.

After earning a degree in ocean engineering, he found a job at Sunreef and swiftly climbed the ladder from craftsman to supervisor. He owns a car and a motorcycle and is building a new house.

“I have a lot of things my father didn't have,” he says.

Inside a brick building the size of an airplane hangar, a dozen craftsmen in jeans and flannel shirts string wires and secure plywood boards in the cockpit of a new 70-foot yacht. The air is thick with the smell of fiberglass and the whirring sound of machines.

Last year, Poland's 900-odd privately owned boat builders did more than a billion dollars of business, delivering around 15,000 luxury yachts to buyers in the US and Europe.

The rapidly growing industry helps explains why the export-oriented economy is expected to grow another 2.5 percent next year.

Still, among maritime workers, Sunreef's Lorkowski is among lucky few. At 13,000 workers, the country’s entire yacht-building industry employs only three-quarters of the number that once swarmed over ships in the Lenin Shipyard alone.

It's the same story in industries across Poland, whose 10 percent to 13 percent unemployment rate matches the European Union average.

A full quarter of the country's young remains jobless despite the exodus of some 2 million Poles for jobs elsewhere in Europe.

During the first democratic elections that year, all seats in parliament went to Solidarity members except for one. That went to a businessman who had been thrown out of the Communist Party for corruption — a feat that took considerable doing. He won by promising workers he would give the one in ten with real talent a chance to rise to the top.

“That should have been a warning signal,” says Konstanty Gebert, a journalist who was part of the union movement.

The government lifted price controls and opened trade to foreign competition, forcing businesses to adapt or die. While that later enabled companies such as Sunreef to thrive, it also put millions out of work and gutted a labor movement that had inspired the world.

“Nothing was sexier than a trade union in 1980,” says Gebert, who remembers a TV news announcer applauding rising unemployment — an indicator of a “normal” economy. “But by 1990, it had gone the way of bad toilet paper and shiny suits.”

Last September, a glimmer of the old labor movement surfaced in what some called an “autumn of discontent.” Over four days, Solidarity and two other trade unions protested austerity measures that included the abolishing of the eight-hour workday, a decrease in the minimum wage and an increase in the retirement age.

But when the peaceful demonstration culminated in a march on Warsaw by as many as 100,000 protesters, Prime Minister Donald Tusk called it “an attempt at overthrowing the government.”

A year before, Lech Walesa himself had called on Tusk to send out police with truncheons when unions picketed against an increase in the retirement age.

How did Solidarity become shunned even by the man who was once its leader?

Many of its leaders left Poland or made new careers after the communist collapse, while the idealism of those left behind broke amid the privatization of state assets.

Jeremi Mordasewicz, a construction entrepreneur and former member of the government's labor commission, says the unions that had fought on behalf of Poland's workers later doomed companies in industries like shipbuilding and mining to shut down because they resisted reforms.

“In my enterprises, we had to cut half of the employees, and even then our production was higher than it had been before,” said Mordasewicz, who is now a mediator in union negotiations.

Similar problems continue to drag on the economy, he says.

Borrowing capital costs more than in Germany, while the productivity of Polish workers is far lower. That’s bad for investment, which is sorely needed to create jobs for a workforce that’s still bloated.

Some say the social inequities partly stem from a deeper problem.

Thanks to the backlash against communism in the 1990s, people naively believed competition could solve every problem and scorned investing in education and social programs, says Andrzej Celinski, a former leader of the independence movement who broke from Solidarity in 1999.

“It's one of the country’s biggest shames,” he says.

Back at the former Lenin Shipyard, row upon row of bracings for building container ships stand empty. A single, orange-colored gas transport ship floats in the canal.

“You could walk across the decks from one to another,” he adds, gazing off across a scrubby field where now pallet after pallet of steel lies rusting.