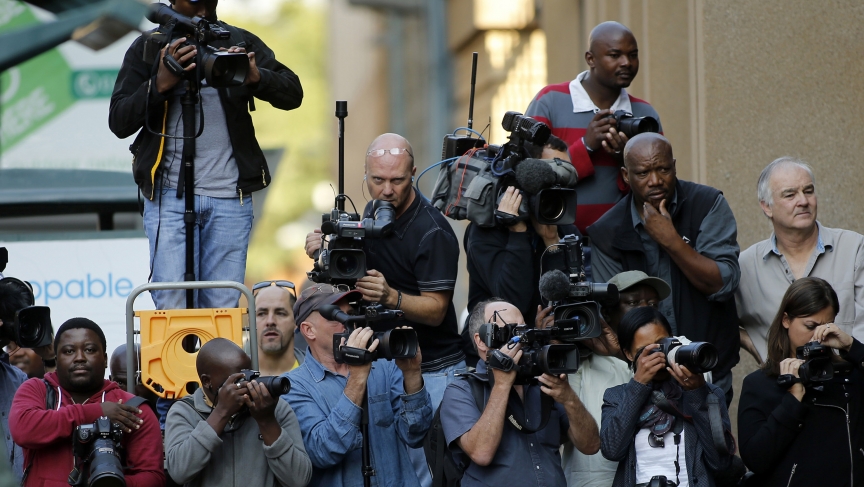 Members of the media wait for the arrival of Oscar Pistorius ahead of his trial at the high court in Pretoria, South Africa, April 7, 2014.

The courtroom in Pretoria, South Africa was packed again on Tuesday for the second day of Oscar Pistorius' testimony.

Some see him as the victim of a terrible accident  — some as a heartless murderer.

The former Olympic and Paralympic athlete is on trial for killing his girlfriend, Reeva Steenkamp. In his testimony, he described the moment he fired the shots that killed Steenkamp.

He said he had heard noises coming from the bathroom and thought an intruder was coming out.

"Before I knew it, I had fired four shots at the door," Pistorius said.

The BBC's Milton Nkosi was in the court room today.

"The whole country is waiting with bated breath to hear exactly how [Pistorius] explains the idea that someone might have climbed up the ladder, through the bathroom, in one of the most secure estates in the capital of South Africa," he said.

There are no juries at trials in South Africa, and Pistorius' fate will ultimately be decided by the judge, assisted by two assessors. But South Africans have strong feelings about his guilt or innocence.

"Listening to the radio stations today, and the talk shows and the call-ins, there is a varied number of opinions about [Pistorius'] emotions today," Nkosi said. "People are saying this is an act, throwing out phrases like ‘he’s got to win an Oscar for this one’. But other people say they feel for him."

Steenkamp, and her family, has some unlikely supporters at the trial: the Women’s League of the ruling African National Congress.

Since the trial began, a cluster of women wearing the green and black uniform of the League have gathered at the courthouse to march in support of Steenkamp.

The league could “no longer accept the fate of women as victims of violent men,” said ANCWL President Angie Motshekga.

"They are in court supporting Reeva Steenkamp’s family because South Africa has one of the highest levels of gender violence, particularly against women," Nkosi added. "They are supporting Reeva in this specific case, but they’re also sending a message — that they are standing with the women who are, by and large, the victims from the men here in South Africa."

The trial continues on Wednesday.

Oscar Pistorius could face life imprisonment if convicted of murder.