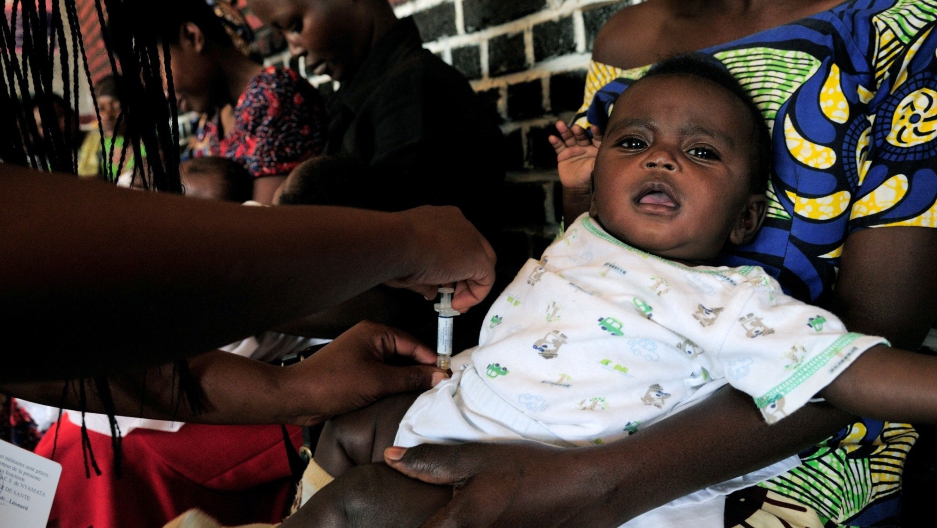 An infant receives a vaccine at the Nyamata Health Center in the Bugasera District of Rwanda.
Credit: Shannon Jensen
Share

After the 1994 genocide in Rwanda, many wrote the country off as a lost cause when it came to public health. Up to one million people had perished, and millions more were displaced. Hospitals and clinics lay in shambles. Most health workers had been killed or had fled. Widespread rape disseminated HIV, and a massive cholera epidemic swept refugee camps. Fewer than one in four children were vaccinated against measles and polio. Rwanda was the poorest country in the world, with the highest child mortality rate and the lowest life expectancy anywhere.

Twenty years later, Rwanda’s rapid recovery has been nothing short of historic. Life expectancy has doubled. Child mortality has fallen by more than two-thirds since 2000. In the past decade, death rates from AIDS and tuberculosis have declined at record speed. Vaccination rates for many diseases surpass those reported in the United States. And Rwanda is on track to become the first African country to achieve the Millennium Development Goals for health.

“In the aftermath of one of the worst spasms of mass violence in recorded history, few imagined that Rwanda might one day serve as a model for other nations committed to health equity,” writes Dr. Paul Farmer, a Harvard Medical School professor and co-founder of Partners In Health, in a study published in The Lancet on Friday.

Farmer, known internationally for his work to improve health care for the poor and marginalized, says it’s the most dramatic turnaround he’s ever seen.

“Rwandans realized that the only way to recover from the horrors of the 1994 genocide against the Tutsi would be to invest in our most valuable resource — our people themselves. Prioritizing social welfare and health equity has been a foundation of the results we have seen with our many partners,” says Dr. Binagwaho.

Immediately after the genocide, Rwanda received less per capita foreign aid for health than any other African country, according to data from the World Health Organization. Some experts even advised withholding health care for children out of fear that the population would grow faster than food supply.

Rwanda’s new government, on the other hand, placed investment in public health — for all citizens – at the center of its development agenda. In 2003, Rwanda’s constitution enshrined health as a human right.

One key strategy has been equipping communities to address health at a local level. Each of Rwanda’s nearly 15,000 villages has elected community health workers. They’ve been trained by the health ministry to offer preventative, diagnostic and treatment services and link patients to the formal health care system. Next, the government plans to open more than 2,000 health posts in rural areas to expand access to medicine and services, while providing income for cooperatives of nurses and community health workers.

In 2004, after a pilot project in three districts, the health ministry launched a nationwide program of community-based health insurance. Thanks to a sliding scale for premiums and co-payments, health coverage is now virtually universal.

Rwanda’s government has insisted that aid agencies, foreign governments and other partners work within its agenda. By 2010, more than 58 percent of foreign aid to Rwanda was channeled through the national government, compared to an average of around 20 percent in post-conflict countries, according to the study.

“Countries really need to sit and understand the issues they face themselves first, instead of throwing the responsibility to external donors or technical assistants. If you have a strong plan and know what you hope to achieve, and then reach out for specific support from partners, this can lead to true development,” says Rwandan health ministry official Dr. Jean Pierre Nyemazi.

Some of Rwanda’s lingering problems include high rates of child malnutrition, mental illness and non-communicable diseases. Also at issue is whether the government can sustain its investments in public health.

Partners in Health, the organization Farmer co-founded, has worked with the Rwandan health ministry since 2005. Today, in partnership with sister organization Inshuti Mu Buzima, the organization helps provide health care to 800,000 people in three rural districts.

“Just as failure and suffering can move people, so too can a turnaround and improvement,” Farmer said. “Although the Rwandan health authorities would be among the first to tell you they have a long way to go, it’s moving to me that they’ve come a long way, against great odds and at a rapid pace.”