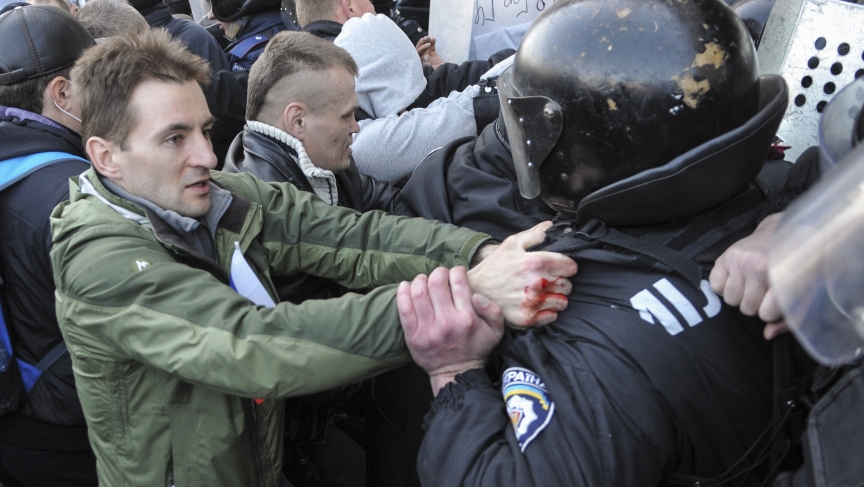 Pro-Russian activists scuffle with police near the regional government building in the eastern Ukrainian city of Donetsk. Protesters hung up a Russian flag in defiance of Kiev's pro-European government.

On Sunday, pro-Russian protesters stormed and seized government buildings in three eastern Ukrainian cities. They waived Russian flags, chanted "Putin, Putin" and, in a scene all too familiar for Ukrainians, the protesters demanded that referenda be held on secession in three cities, Donestsk, Luhansk and Kharkiv.

Ukraine's leaders are blaming Russia for orchestrating the recent trouble.

They're the most Russian-speaking cities in Ukraine and also have strong connections to the ex-Russian empire, he said.

Kolyandr is the Journal's senior reporter in Moscow. He grew up in Kharkiv and said, to his surprise, he discovered that there was very little support for Moscow there.

"People say, 'Yes, we speak Russian. Yes, we can see ourselves ethnically Russians.' But they feel themselves Ukrainian citizens. And to my personal impression, the majority of the people in the city of Kharkiv are absolutely against joining Russia anytime soon," he said.

The people who are protesting, he said, are people who consider themselves "part of mother Russia. They're active, but they kind of understand it's their last chance in the foreseeable future."

Ukrainian leaders said the demonstraions are another attempt by Russia to destabilize the country and seize Ukrainian terroritory. Acting Ukrainian President Oleksander Turchynov said "anti-terrorist measures" would be used against those who take up arms.

Russia's foreign minister rejected Ukraine's accusation that its government was behind the unrest, adding Ukraine should stop blaming Russia for its struggles.

Ukraine must be very careful at this point, said Kolyandr. Any drop of blood in "Donestsk, Luhansk and Kharkiv ... would give Moscow a very clear reason to step in."