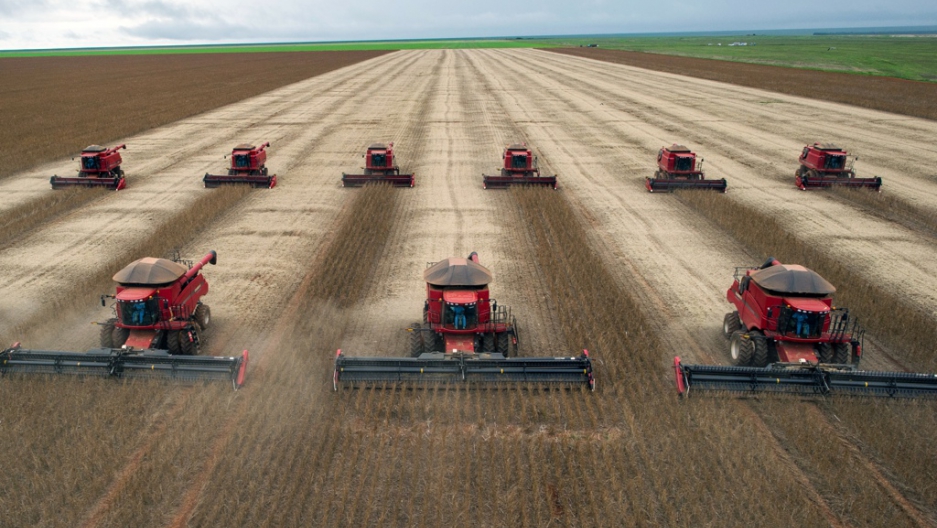 They paved paradise and put up a soybean farm.
Credit: Yasuyoshi Chiba
Share

BRASILIA, Brazil — It might not look like much, but this little green bean is both villain and hero in Brazil’s Cinderella story.

Soybeans helped turn this South American nation from a country of peasants into the world’s seventh-largest economy. They’re also blamed for the destruction of vast swathes of rain forest, causing habitat loss and bloody land conflicts.

Brazil predicted this year it was going to out-bean world soy leader the United States. A nasty drought may have put the kibosh on that, but this country's output is still expected to reach some 94 million tons, coming up close behind the US's 99 million tons.

The steady advance of soy is huge news here: Photos of a grinning President Dilma Rousseff shaking hands with farmers in Mato Grosso, the heart of Brazil’s agricultural revolution, have been splashed all over the papers.

So what's so great about soy? For one, it's an extremely versatile bean. It’s used to make tofu, margarine and biodiesel. Its oil adds an irresistible crisp to French fries and its milk furnishes lactose intolerant cafe-goers with drinkable lattes. And those waxy crayons your young niece is using? Probably soy-based as well.

But the majority of it — some 70 percent of the world’s supply, according to the Earth Policy Institute — is used to feed cattle, chickens and pigs.

Most of Brazil’s soybeans go to Europe, and increasingly to China, whose rapidly growing, meat-loving consumer base is driving much of world demand.

So, as a business proposition, in the long term soy looks like a solid bet: China’s middle class is predicted to triple by 2022.

But, like any story that sounds too good to be true, this one has its victims.

Garnering less attention than the bumper soybean crop is the upcoming end of Brazil’s soy moratorium, which forbids the trade of soybeans grown in newly deforested areas of the Amazon.

Farmers, environmental groups, the government and multinational firms such as McDonald’s agreed on the pact in 2006. That came after soaring prices made farming the bean a lucrative endeavor.

Watch this GlobalPost video: What if we lost the Amazon?

In Brazil’s isolated western states, where the federal government’s reach is minimal, farmers had been pushing into pristine parts of the rain forest, frequently clashing with indigenous communities. In 2004 alone, an area of rain forest almost as big as Hawaii was cleared, according to the National Institute for Space Research.

A lot of that was done legally. Brazilian law allows some logging in the Amazon but strictly regulates it. In 2010, the government began granting private companies 40-year leases on patches of forest for timber production. Companies must inventory tree species on their lots, submit plans for sustainable logging and agree to reforest the area.

What's more, private landowners who wish to clear land for agriculture or other purposes must keep at least half their plot forested with native vegetation. No logging or forest-clearing is permitted on nature reserves or indigenous lands, which together make up about 30 percent of the Brazilian Amazon.

Welcome to the edamame jungle.

Environmentalists say the moratorium has been enormously successful. Deforestation in the Amazon dropped steadily from 10,588 square miles in 2004 to 1,797 square miles in 2012. Of the forest cleared since 2006 in soy-producing municipalities, only 4 percent was planted with soy last year.

Now for the bad news: Data show the forests are shrinking again, and some environmentalists are worried that’s going to happen even more quickly once the government lifts the moratorium on Jan. 31.

“What causes deforestation? In Brazil, the major cause is still agribusiness,” said Leila Salazar-Lopez, program director at Amazon Watch.

Salazar-Lopez said the end of the moratorium is one more in a series of recent forest protection rollbacks.

“With the news of deforestation increasing in Brazil, with the Forest Code being revamped, with the ‘ruralistas’ and agribusiness really having control of Congress and creating an assault on the environment and indigenous rights,” she said, “people should be very concerned.”

By “ruralistas” she means the land-owning politicians who lobby for agricultural interests.

Ruralistas say they’re helping Brazil by growing the economy and ensuring food security. But green campaigners claim they have far too much political sway. That, environmentalists say, made for easy passage of a laxer Forest Code that took effect in May 2012.

Critics say the agro lobby has enjoyed major victories even during consecutive leftist administrations of former President Luiz Inacio Lula da Silva and his successor, Rousseff, both of the Workers Party (PT).

“Under the PT governments of Lula and Dilma, agribusiness was actually consolidated. More investments were made, more government support was given,” says Kelly Mafort, national director of Brazil’s Landless Workers’ Movement, known as the MST for its initials in Portuguese, which fights for a more equitable land redistribution.

President Rousseff’s office declined to comment directly on the criticism that the government prioritizes agribusiness interests over those of peasants and the environment. But a spokesman for the president sent a speech Rousseff gave in February to officially open the grain harvest.

“I remember when we [the Workers Party] arrived in government in 2003, I remember that agricultural policy had severe limitations,” Rousseff said.

Since that time, she explained, the government has increased agriculture spending by over 400 percent.

Since its conquest by the Portuguese, Brazil has been a country of enormous inequality, with large expanses of land in the hands of the elite, and marginalized indigenous groups and impoverished laborers living hand to mouth.

With the expansion of agribusiness, campaigners say, land inequality is increasing.

More than half of Brazil’s farmland belongs to just 2.5 percent of the population, according to the Brazilian Center for Analysis and Planning in Sao Paulo.

Landless workers and environmentalists fear the new Forest Code is making matters worse. It grants amnesty to anyone who deforested land before July 2008, and reduces the proportion of a plot of Amazon land that must be kept forested to 50 percent from 80 percent.

Last year, the first since the code’s implementation, deforestation rose for the first time in six years — by about 28 percent.

“It is possible the people who deforested this land are saying, ‘Hey, if the guy who did it in 2008 can receive amnesty maybe I can receive amnesty too in five or 10 years,’” said Romulo Batista of Greenpeace. “They may see the new Forest Code as an opportunity to clear more land.”

It takes a few years to make jungle land suitable for agriculture, Batista says. First it must be slashed and burnt, then cattle are grazed on it. Tree roots must be hauled out, and the land liberally treated with chemicals to change its acidity levels.

“We can’t say with certainty, but it looks like this [newly deforested] land will be used for agriculture,” Batista said.

Agriculture Minister Neri Geller says any credit for the drop in forest clearing up to 2012 ought to go to the government.

“Deforestation has decreased since 2006, but not because of the moratorium. It is through government vigilance in introducing and enforcing deforestation rules,” Geller said. “The opening of any new areas is detected by our satellite systems and goes automatically to a rigorous system of fines.”

He did not comment on the recent uptick in forest clearing.

But he said, “There is no danger that deforestation will increase when the moratorium ends.”

The government is focused on improving soybean output by renovating degraded land and using new technologies, such as equipment that can identify which areas of land need extra water or fertilizer, rather than expansion into new lands, Geller added.

“The challenge now in the coming year is to design and negotiate what will replace [the moratorium],” Schwartzman said. “The government is obliged under the new Forest Code to design and put into practice their rural environmental registries.”

These systems, known as CAR, will register the country’s rural properties, allowing the government to better track and enforce land clearing.

“The moratorium was voluntary. The CAR will be stronger, without a doubt,” Geller said.

Some, of course, are happy about the moratorium’s end.

“The moratorium was an emergency and temporary measure,” said Bernardo Machado Pires, head of sustainability for the Brazilian Association of Vegetable Oil Industries. “Today, with improved environmental governance and law enforcement, the context is very different.”

Aprosoja, a major soybean growers’ group, considers the agreement an infringement on the rights of farmers to sell their produce to whomever they please.

“The laws of Brazil say that it is permitted to open a portion of your Amazon property to farming,” said Glauber Silveira, Aprosoja president. “The moratorium doesn’t respect this.”

Moreover, handwringing in the developed world over Brazil’s agricultural policies is unfair, Silveira says — no sharp-eyed green movement existed when industrialized nations razed their own woods.

“If these countries in Europe and the US are really worried about the environment, they should simply stop producing things and plant forest there,” he added. “It is quite simple.”