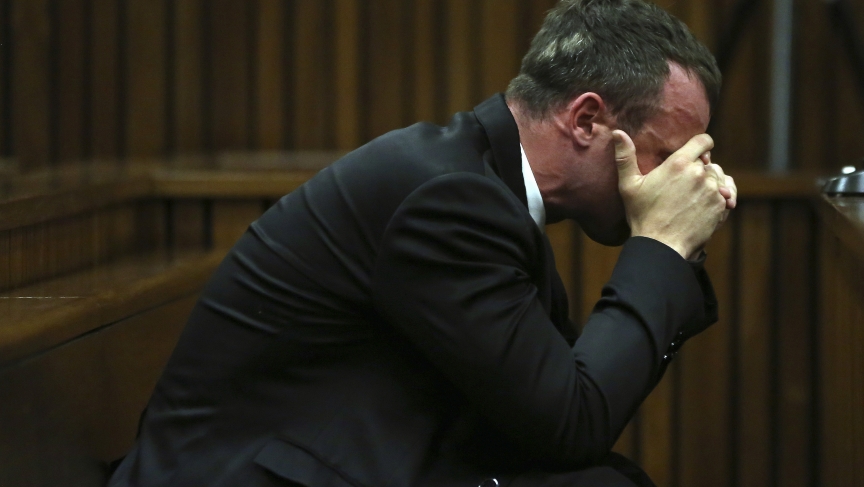 Oscar Pistorius becomes emotional during his trial at the high court in Pretoria, April 7, 2014.

It was a tearful apology.

Olympic runner and double amputee Oscar Pistorius took the stand at his murder trial in Pretoria, South Africa on Monday.

Pistorius is accused of intentionally killing his girlfriend Reeva Steenkamp, at his home last year.

He says he thought he was shooting an intruder.

Pistorius sobbed as he addressed the court - and Reeva Steenkamp's family.

"I'd like to apologize and say that there's not a moment and hasn't been a moment since this tragedy happened that I haven't thought about your family. I wake up every morning and you're the first people I think of, the first people I pray for. I can't imagine the pain and the sorrow and the emptiness that I've caused you and your family. I was simply trying to protect Reeva. I can promise that when she went to bed that night she felt loved."

Pistorius said he's been traumatized since the Valentine's Day shooting last year. He said he was on antidepressant medication and sometimes woke from nightmares to the "smell of blood."

"What they were trying to do today was to establish Oscar Pistorius’ state of mind, his vulnerability that he felt, the lack of safety that he felt at home and in South Africa," said Geoffrey York, Africa correspondent for Canada's Globe and Mail. "And what the possible reasons could be for why he opened fire, thinking it was an intruder."

York was in the court room as Pistorius was questioned by his defense lawyer.

"A huge amount of the defense’s case will be Oscar Pistorius’ state of mind. How unsafe did he feel – not just because of the crime in South Africa but also because of his disability? He talked today of how unstable he feels when he doesn’t have his prosthetic legs, when he’s walking on his stumps."

Pistorius will return Tuesday to continue testifying. The judge granted an early adjournment because she said Pistorius looked "exhausted."