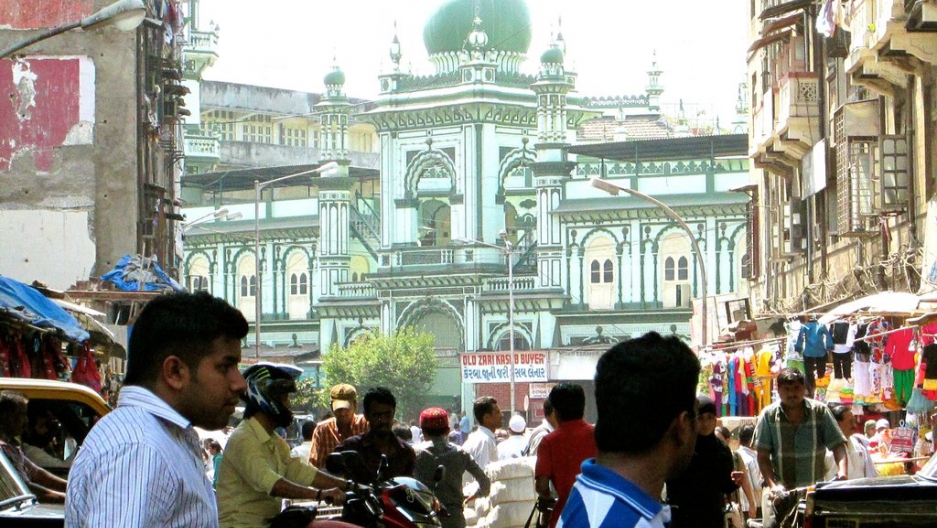 MUMBAI — The humid Tuesday evening wanes as Akeel Shaikh, 19, spews a blend of Hindi and Urdu commands into his cell phone, rounding up members of his Muslim political group from the narrow booth of a Mumbai bakery and milk bar.

One after the other, 20 young Muslim men begin to appear on the darkening sidewalk. The teenagers and twenty-somethings clap one another’s shoulders in greeting, laughing and joking as they mill around the sidewalk. When all have arrived, Shaikh, the serious and focused president of the group, calls them to order.

“We’re just 18,” Shaikh said. “I’m speaking to you frankly, we’re just growing, and fighting for the rights of Muslims and the growth of India.”

The race for India’s next lower house of parliament and new prime minister has thrown the country’s growing and historically marginalized Muslim population into the middle of an intensifying game of political tug-of-war. In elections that began Monday, three major political parties are vying to win the votes of 180 million Indian Muslims, nearly 14 percent of the population.

The Hindu nationalist Bharatiya Janata Party is expected to unseat the incumbent Indian National Congress and secure a parliamentary majority to the dismay of Muslim communities across India. BJP candidate Narendra Modi has a controversial history with India’s Muslims, and his lack of outreach to their communities during campaigning has created tension and mistrust.

“We Muslims don’t support the BJP, nor do we support Modi, because of the 2002 Gujarat riots,” Shaikh said.

In 2002, riots in Modi’s home state of Gujarat killed at least 1,000 people, mainly Muslims, while he was chief minister. The riots also displaced thousands of Muslims. Many vehemently accuse Modi of not adequately punishing those who instigated the violence while failing to give reparations to the victims.

The New Age Of Indian Muslim Politics by Boba Track

Shaikh regularly posts Modi updates on the Muslim Youth Group Facebook page. Facebook is a key tool for the MYG, “to be connected with people, to be united. When we are in unity, we can do anything,” Farhan said.

The MYG Facebook group page has nearly 5,000 members from all over India, but most are from Mumbai. Members doubt their political clout in these elections, as many members cannot yet vote. But they say their passion to get Muslims into leadership roles contrasts with their parents’ generation — one of complete disenchantment, anger and aloofness in relation to India’s political system.

Walking through the congested streets of Mumbai’s Bhendi Bazaar, a lower-income Muslim area that has been called a "ghetto" due to its deteriorating, rat-infested buildings and poor sanitation, MYG members Akeel Shaikh and Hammad Wahedna point out how politicians don’t really know the issues many Muslims face daily.

A few shopkeepers and customers discuss their frustrations and distaste with India’s political system.

“I don’t think I will vote for anyone,” Irfan Kashif said as he purchased bread at a bakery in the bazaar. “Nothing has changed for 65 years. I’ve lived here since birth and we still don’t have basic infrastructure, necessities, nothing.”

Kashif says his friends don’t care about voting either, and he doubts Modi will win the majority of votes.

“Sure he has done a lot for his mother state, Gujarat, but he is not so popular in the northeast or south,” he explained.

Hadi Husmani owns Sahil Restaurant, a bazaar staple, and scoffs when asked if Muslims will vote for Modi.

“Muslims won’t vote for BJP because they still have the memory of the riots,” said the leathery restaurant owner as he counted change at the register.

And his vote? Political parties haven’t made much of a difference in his daily life, selling to-go lunches in a small, cramped restaurant off Bhendi Bazaar’s dusty, broken street.

“BJP, Congress, they are all the same but I guess I will still vote for Congress because my heart doesn’t want to vote for BJP,” said Husmani.

Despite being a coveted voting bloc this election, many Muslims have given up on politicians fulfilling promises to uplift Muslims after they are elected. The governing Indian National Congress was the Muslim favorite for years, but after a disappointing term of untouched bills and failed initiatives to uplift education, reduce unemployment and curb violence, Muslim support has splintered.

“If I told my parents I wanted to go into politics they would be mad. In India, it is not a good thing,” said MYG member Noman Kahn.

A recent poll that surveyed about 1,297 Muslim voters shows how far the Congress Party has fallen in Muslim eyes. Only 11 percent of those surveyed said they would vote for Congress, way below that of the BJP, which garnered 26 percent. More than half said they were voting for the Aam Aadmi Party, a “Common Man” platform focused on battling corruption.

“In the last few years, my government hasn’t communicated successes as much as it should have,” Milind Deora, an incumbent Congress candidate running in Mumbai, said in defense of his accusations that his party failed to uplift struggling communities.

Deora repeated that Congress’ main focus is providing better opportunities to Muslim youth in terms of improved, tech-outfitted schools, but concedes that most government sponsored Muslim schools are still entrenched in poverty and suffer from careless educators.

“That’s because Congress does politics of appeasement and not change,” said Ashish Shelar, the president of the Mumbai division of the BJP.

“The BJP never campaigns on religious issues,” said Shelar. “Modi always says he is a nationalist first and a Hindu second.”

When pushed on BJP’s complex and wavering relationship with Muslims, Shelar’s voice intensified.

In his opinion, Muslims want to stay marginalized and separate from the mainstream by demanding more reservations and “special attention.”

“Politicians only come or elections and to get money,” said Wahedna. “They don’t want to change society or our poor communities.”

A party for the common man

Aliya Shaikh, one of the MYG’s most proactive female members, says Muslim voters need to choose a party that will fight for Muslim seats.

In the last election for India’s lower house of parliament, known as the Lok Sabha, only 30 Muslims were added. A proportional representation would include at least 70 Muslim members.

“We have to have the courage to fight for correct wages, seats and more reservations,” says Shaikh, who at 16 says she is getting more invested in the political process.

If she could vote, Shaikh said she would choose the Aam Aadmi Party (AAP) “without question.”

Shaikh, her group members and other political observers said they are noticing signs of a critical mass of Muslim votes veering towards AAP. The party paints itself as anti-communalism, development driven, and most importantly, secular.

AAP leader Arvind Kejriwal has gained clout for taking on Modi. At a recent meeting with Muslim leaders in Delhi, he argued that communalism is a bigger threat than corruption, and pointed out that BJP has perpetuated communalism in India.

Shaikh pointed out that if elected, the AAP could actually place more Muslims into high-profile seats.

“There’s 11 Muslims in their list of 61 general election candidates,” she said. “It’s still not a lot but it might be enough to help poverty and unemployment.”

Despite AAP’s growing popularity, the party still will not broach Muslim-centric issues, furthering the general consensus that there is no prominent political party where Muslims truly belong.

“Most of the politicians in our country, their ages are fifty to sixty. They’re not getting elected for real politics,” said Shaikh. “But we are united and we are the youth, when we grow up we will change everything.”