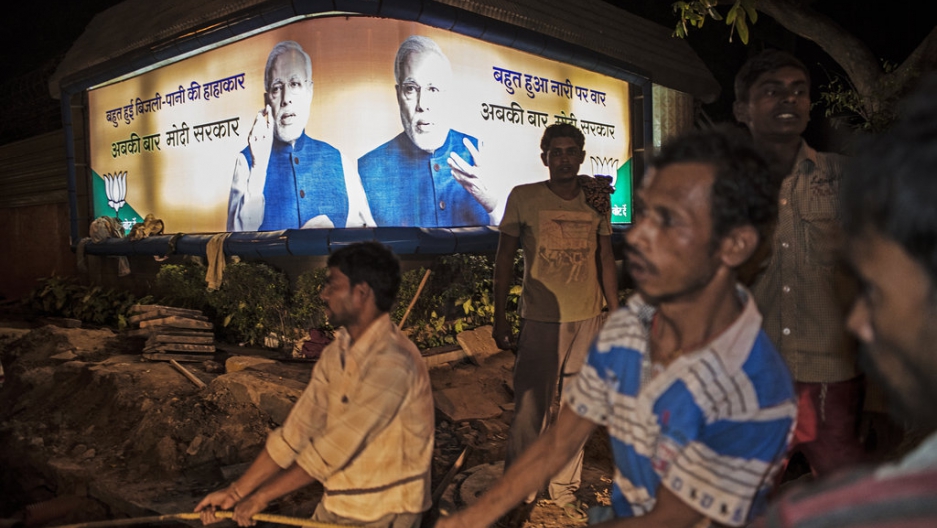 MUMBAI — For years, India’s Dalits have found an ally in the left-leaning Indian National Congress party, whose leaders have championed welfare programs and minority protections.

Formerly known as “untouchables” in the country’s now-outlawed but still deeply entrenched caste system — a rigid stratification scheme that determined economic, social and political roles of Hindus on the basis of birth — Dalits remain a large but marginalized group in Indian society.

As voters begin to head to the polls on April 7 for the national elections, Dalit leaders are aligning with an unlikely ally: the right-wing bastion of Hindu nationalism, the Bharatiya Janata Party.

The BJP has vowed to accelerate economic growth and reduce corruption, claims buttressed by prime minister candidate Narendra Modi’s record as chief minister of Gujarat. This platform has proved enticing to businessmen and politicians alike in the Dalit community. To them, a stronger GDP translates to more jobs and a reduction in poverty, something the Congress-led government — despite its welfare programs — has been unable to accomplish.

Detractors doubt the equity of wealth distribution under a free market model, and question whether voting for Modi’s economic agenda comes at the cost of embracing his party’s Hindu nationalist ideology. Based on the idea that the cultural identity of India is Hindu, to the exclusion of the country’s Muslims and Christians, Hindu nationalism is partly blamed for inflaming tensions among different religions and castes.

In 2002, while Modi served as chief minister of Gujarat, riots broke out between Hindus and Muslims, leaving over 1,000 people dead. Although the Indian Supreme Court has since exonerated him, Modi is accused of abetting the atrocities, and the US has refused to issue him a visa.

That such a polarizing figure remains the front-runner underscores the frustration of Dalits and others with the status quo. But Modi’s appeal has a notable precedent: Great Britain’s controversial Iron Lady, the Tory prime minister whose free market policies and cuts to the welfare state also came packaged in nationalism.

India’s GDP has increased at a rate of less than five percent for the seventh consecutive quarter, which after years of increasing growth, peaking at over 10 percent in 2010, is cause for alarm.

Dahapute is critical of the current government’s economic policies, which he thinks are too intrusive and hamper growth in the world’s tenth-largest economy by GDP.

The World Bank would seem to agree. India ranked a lowly 134 out of 189 in the organization’s annual Ease of Doing Business report — indicating how difficult it is to start a business given the country’s byzantine regulatory environment. By comparison, China came in second.

Enter Narendra Modi and the BJP. In an election where economic growth is considered one of the most important issues, Modi is seen as being uniquely qualified to boost the country’s GDP.

Gujarat has become the poster child for globalization in India, growing at a faster rate than the country as a whole while attracting multinational corporations like Ford and General Motors. Hopes are high that, if elected, Modi will replicate this economic success on a nationwide scale.

“Modi has proven himself as a leader in Gujarat and he will be helpful to businesses in India. He’s more business-friendly [than Congress],” said Ashok Khade, founder and director of DAS Offshore Engineering, a Dalit and a self-made millionaire.

Khade represents a growing group of Dalit entrepreneurs who think the free market can do more to elevate the socioeconomic situation of Dalits than traditional reservation policies, which allocate a certain number of government jobs and university seats to disadvantaged populations.

Nobody ever came up [out of poverty] under this system. Public utilities jobs cannot lift millions of people out of poverty,” Dahapute said about the limited reach of reservations.

But whether the private sector — and by default, the BJP — provides a better alternative for Dalits remains open to debate. In addition to doubts about whether Modi is actually responsible for Gujarat’s economic success (some surveys indicate Gujarat was already heavily industrialized and experienced high growth rates before Modi took office), is the question of who exactly benefited from the boom.

Measuring economic growth over the last two decades, economists at the Indira Gandhi Institute of Development and Research found that the gap between wealthy Indians and Dalits widened at the national level, while Dalits generally experienced more inclusive growth in Gujarat. But even there, researchers cautioned, gains fluctuated from year to year.

Despite the debate over his record in Gujarat, Modi and the BJP’s message of development is resonating beyond wealthy Dalit elites — and striking a chord with longtime Dalit political leaders.

Emblematic of this shift is Ramdas Athawale, a Dalit in Mumbai who leads a faction of the Republican Party of India, or RPI. In 2011, Athawale ended more than a decade of cooperation with the Congress party and sided with two of its principal opponents, the Shiv Sena and BJP parties. In recent months, two more prominent Dalit leaders have aligned with the BJP.

Both Shiv Sena and the BJP draw on Hindu nationalism, or Hindutva, which attempts to forge a common, national identity based on a shared Hindu history. Critics say that Hindutva relegates Dalits to a lower status — mirroring the discrimination codified in the caste system.

But Athawale — who once agitated as a Dalit Panther, an activist group modeled on the Black Panthers — insisted that aligning with the Hindutva fold is compatible with Dalit welfare.

“We aren’t with the BJP principally. We are with the BJP on a common minimum program,” Athawale said, listing shared priorities like eliminating corruption, growing the economy and curbing the rise in prices. “And Modi is not raising the issue of Hindutva now,” Athawale said, but rather galvanizing support around economic discontent.

Dalits are a captive audience to Modi’s campaign against high prices, especially of food staples like onions. The number of Dalits living below the poverty line ranges from about 50 percent to 93 percent. But at the Ramabai Ambedkar colony, one of a handful of Dalit slums in India’s financial capital, economic issues are swaying voters, but not necessarily toward Modi.

Many in this slum declare allegiance to the Bahujan Samaj Party, a political force in northern India that has mobilized Dalit voters there. But the BSP hasn’t gained traction in Mumbai, keeping prevailing political leanings intact.

“A majority of Dalits, lower castes and Muslims will vote for Congress,” said Dalit journalist and social worker Anand Shindekar. “There’s a fear among minorities that with Hindu nationalism in power, it will become like Pakistan, with its chaos and riots.”

Although Shindekar is allied with the Congress, he sees why other Dalits are swayed by the BJP’s message.

“For 60 years,” Shindekar said, “Dalits have supported the Congress party, but they remain in the same place.”

It helps that Modi is touting his origins as a tea vendor from a lower caste, a sharp contrast to political scion Rahul Gandhi’s attendance at Harvard and Cambridge University. But not everyone thinks the BJP has Dalits’ best interests at heart.

“Whenever you talk about affirmative action, you find BJP opposing and trying to marginalize that discourse,” said Irfan Engineer, director of the Center for Study of Society and Secularism. What the rhetoric of globalized growth amounts to is a smokescreen, Engineer said.

“The BJP is talking the language of development,” Engineer said, “but in reality, they’re excluding the lower sections of society.”

And its shifting political fortunes that’s drawing out Dalit support for the BJP.

“Because the BJP's stars are up and shining, some Dalit leaders think they'll get political power there,” said Delhi-based sociologist Dr. Vivek Kumar. The BJP benefits as well, gaining a lower caste endorsement that softens its abrasive, hardline image, Kumar said.

Athawale admits he’s playing politics to secure advantages — but for Dalits, he said.