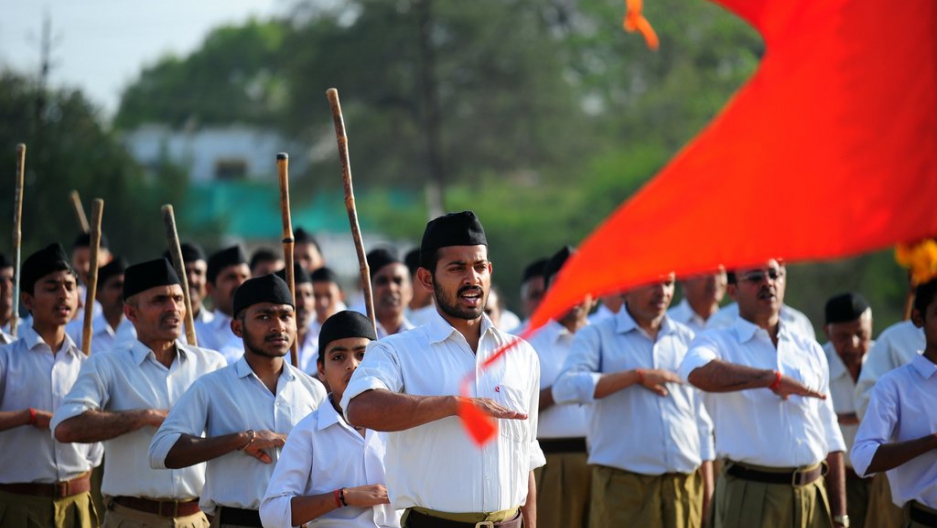 PUNE, India — They gather every Monday evening promptly at six, a group of atheists, Hindus, Muslims and Christians, to discuss the future of India.

They are true believers in the ideals of rationalism and tolerance that they feel lie at the heart of India’s national identity. And this weekly gathering is exactly where their deceased leader, the rationalist organizer Narendra Dabholkar, would be if if he hadn’t been gunned down amid a climate of rising extremism and intolerance.

Dabholkar, 67, was shot four times at close range and killed last August as he walked along a nearby bridge after enduring 20 years of death threats. His murder was a blow to what remains of the progressive political community here in Pune, an academic and industrial hub teeming with construction projects, and to the organization he founded, the Maharashtra Committee for the Eradication of Blind Faith, or MANS.

As local police work Dabholkar’s murder case, his friends and colleagues continue to challenge the central role that rising religious fundamentalism, particularly within the majority Hindu faith, plays in Indian government and society. These secular activists see its influence everywhere from the enduring presence of charismatic and influential “godmen” who often claim spiritual attainment to the vast sums donated to temples as offerings to Hindu deities. Most of all, they fear that the politics of the religious right might have something to do with the death of their leader.

The conversation at MANS traverses many national issues from the Indian constitution’s guarantee of religious freedom to the limitations of the caste system. And in an election year defined by the ascendance of the Hindu nationalist Bharatiya Janata Party (BJP) and its allies in the Hindutva movement, the dialogue regularly returns to the dangers of religious fundamentalism in societies around the world.

“We are a very poor country where half the people go to sleep hungry,” said Deepak Girme, a successful businessman and longtime volunteer at MANS, founded in 1989.

“If they claim that by following a system of religion they have been following for hundreds of years, that leads to a happy life, that is a myth,” Girme added.

India has actually brought its poverty rate down dramatically in the past two decades, from 45 percent of the country in 1994 to 22 percent in 2012, according to a McKinsey Global Institute report released in February. However, the same report found that “56 percent of the population lacked the means to meet essential needs” including food, energy, housing, drinking water, sanitation, health care, education and social security.

En route to the Monday evening gathering from his peaceful, breezy personal office along narrow streets reminiscent of a motorcycle derby, men and women in helmets and scarves darting through the polluted air, the 62-year-old Girme talks about one of MANS’ neighbors. Just steps away is an outpost of Rashtriya Swayamsevak Sangh, (RSS) a paramilitary Hindu nationalist organization closely affiliated with the BJP.

“They have reached out to us a couple times wanting to know more about what we do,” Girme said. “We haven’t returned the favor. We know what they do.”

Since its founding in 1925, the RSS has worked to build a Hindu Rashtra, or unified Hindu nation, sometimes through violence. If the small minority of progressive rationalists at MANS represent the left of the political spectrum in India, then the RSS and its Hindu nationalism is all the way at the right.

“Several things try to break nationalism, including caste,” said Professor Aniruddha Deshpande, president of the Centre for Education Development Administration and an RSS spokesperson. “RSS does not believe in this kind of hierarchy but instead in social harmony.”

Inside the RSS outpost down the street from MANS, a small bunch of members of various ages walked through a military ceremony clad in the organization’s official uniform of wide-legged khaki shorts, short-sleeved white button-downs and black caps. They faced a dais prominently featuring Swami Vivekananda, a Hindu monk who helped introduce Hinduism to the West in the late 1800s.

GlobalPost spoke with several RSS members in Pune, all of whom denounced violence as a means to achieve their goals.

“RSS wants to unite Hindus — but not so that it’s against Muslims or Christians,” said Deshpande, 64. “Harassing people or forcibly doing something against them is not the work of RSS.”

Asked about Narendra Dabholkar and the efforts of MANS to eliminate superstitious religious practice — particularly worship of godmen, ritual sacrifice and other forms of black magic — in the state of Maharashtra, Deshpande had some laudatory things to say.

“Whatever activities Dabholkar had undertaken, RSS had been supporting it,” he said. “MANS has confused Hinduism with some rituals, but we have never believed in all these superstitions.”

Highly suspicious of the Hindu nationalist project, organizers at MANS bring a socialist bent to their community outreach, explained Suyog Nankar, 30, who said he left a lucrative corporate job to teach GMAT preparation to students and devote more time to activism.

“Pune had been representative of socialistic thinking, but now it’s becoming more like Mumbai,” Nankar said. “I’m not against professionalism. It has to be there. But it can go hand in hand with a socialist attitude.”

Back at MANS, Dabholkar’s lean, bespectacled portrait hangs on the wall as women in brightly colored saris and sandals, men in blue jeans and button downs, college students and seasoned professionals sit in a circle of folding chairs on the second floor, just above the progressive bookstore with a media collage in the stairwell including the works of Karl Marx, Sigmund Freud and Indian social reformer Gopal Ganesh Agarkar.

The more than 30 people who have joined on this Monday evening say they know their message of religious inclusion is in the minority in today’s India. Although no one here says they believe Hindu nationalists killed their leader, no one seems to believe the case ends with the two young men arrested in January on suspicion of committing the murder.

“We are proud being a minority but we are not scared,” said Tulshri Raskar, 69, active in the movement, which says it is quietly endorsing candidates from the rabble rousing Aam Aadmi Party in this year’s election. “Dabholkar always said, ‘enjoy the work.’”

And Reverend Chitralekha James, who spoke about her work organizing and empowering Marathi Christian women, offered a Biblical viewpoint on what she called a sadhana, or spiritual exertion toward an intended goal.

“I am sure you are familiar with Jesus’ Sermon on the Mount,” she said. “People who trust in absolute truth, they are like the salt of the earth. We are like salt. Just a little bit is enough. And without us there is no taste in society.”

Priyanka Borpujari contributed to this story, which was made possible by a travel grant from International Center for Journalists.