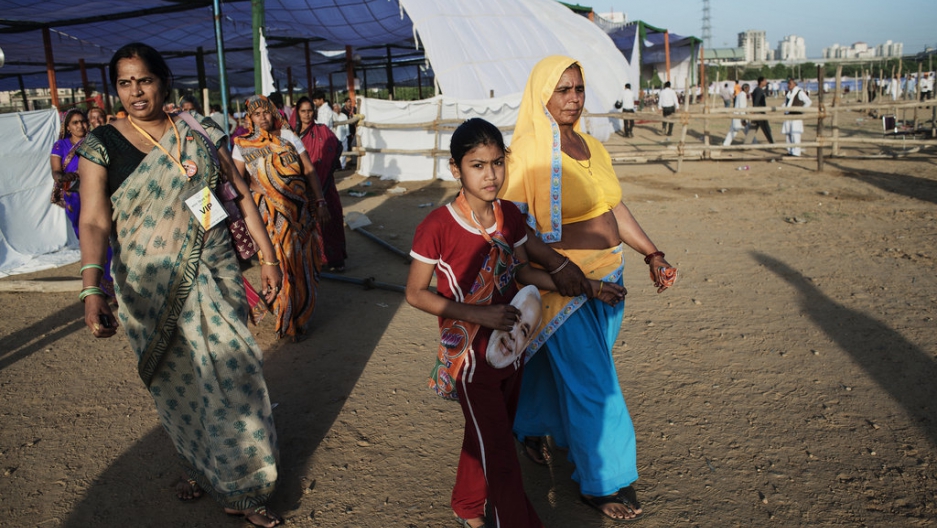 Women who came from the surrounding villages leave after the speech of Narendra Modi, prime ministerial candidate of Bharatiya Janata Party (BJP) seen at an election rally in Gurgaon, near Delhi, on April 3, 2014.
Credit: Sami Siva
Share

MUMBAI — His face is everywhere in this coastal city of more than 12 million, India’s commercial capital and the home of Bollywood. His chosen hue is saffron, Hinduism’s most sacred color which is splashed on the glitzy billboards adorning busy overpasses, the signs of supporters at street corner rallies and the cups of chai handed out at political tea parties.

He is Narendra Modi, the leading political face of a growing Hindu nationalist movement and a leading candidate in India's national elections, a six-week, $5 billion “festival of democracy” which gets underway Monday. Voters will elect a lower house of parliament that will represent the country’s 1.2 billion people — and NaMo, as he is known, has seized the moment.

The charismatic, gray-bearded prime ministerial candidate of the Bharatiya Janata Party (BJP) and his allies say they are hell-bent on cleaning up deeply ingrained political corruption, kickstarting India’s sputtering economic growth and boosting the country’s prestige on the world stage. Modi is expected to win a seat in parliament and his party favored to secure considerably more clout in a multi-party election that could even yield a rare majority for the BJP.

But there are many critics here in Mumbai, the birthplace and traditional stronghold of the incumbent Indian National Congress, who oppose the BJP’s platform. Despite reassuring language of Hindu ideals of tolerance and acceptance, these critics say the BJP’s policies run counter to those ideals. Though the BJP has won power before, holding the majority from 1998 to 2004, there is a sense that the current nationalist wave represents a more fundamental shift in India’s identity.

“They believe in the hegemony of a particular religion, which has never been practiced in this country,” said Indian activist Simpreet Singh, who advocates for Mumbai slum dwellers facing eviction due to development projects.

“In the last two decades, Indian cities are being restructured based on religion. That is accompanied by the rise of Hindu nationalism,” he added.

Enter NaMo. His name is on the tongues of educated first-time voters, movie stars and Marathi-speaking taxi drivers alike. His placid, manicured face looks into the distance from a recent front-page ad in the Times of India. “Time for Change. Time for Modi,” reads the ad.

At night, the BJP’s billboards twinkle with white lights creating silhouettes of lotus flowers and reminding drivers to vote for something new.

But Modi is hardly new to politics. He has been chief minister of the state of Gujarat since 2001 and is now contesting for parliament from Varanasi, the holiest city for Hindus which lies along the banks of the Ganges River. Modi’s fervent followers there have taken to chanting “Har Har Modi,” a variation of the mantra devotees sing to Lord Shiva at Varanasi’s ancient Kashi Vishwanath Temple. To critics, the popular reverence is more akin to blasphemy.

The Congress Party, whose unofficial candidate for prime minister is Rahul Gandhi, the 43-year-old scion of the Nehru–Gandhi dynasty, filed an unsuccessful complaint with the election commission arguing the chant in Varanasi was an attempt by the BJP to present Modi as Shiva himself.

If Shiva is both the creator and the destroyer in Hindu mythology, a dark question hangs over Modi’s campaign about his role in the 2002 communal riots in Gujarat that killed more than 1,000 people, many of them Muslims. Modi has said the riots made him “sad” but he has declined to accept responsibility or to apologize. In an interview with Reuters last year, Modi raised many eyebrows when he likened the 2002 deaths to those of dogs.

“If we are driving a car or someone else is driving a car and we're sitting behind, even then if a puppy comes under the wheel, will it be painful or not? Of course it is,” Modi said. “If I'm a chief minister or not, I'm a human being. If something bad happens anywhere, it is natural to be sad.”

A low-caste chai wallah (tea seller) who went on to become a key strategist for the BJP in the 1990s, Modi’s national popularity as measured by Pew Research is dominant, with 78 percent of Indians polled viewing the BJP’s “poster boy” favorably compared with 50 percent for Congress’ Rahul Gandhi. Modi also leads Gandhi in every region in the country.

Gandhi has attempted to hit back at what he called the BJP’s “politics of  anger.” He has focused his message on the diversity of Indian culture and painted BJP as dangerous and divisive.

“BJP's politics is about two things,” Gandhi said while campaigning in the northeastern state of Assam last month. “First, pit Hindus against Muslims, the rich against the poor... Second, they fail to see the pain of the poor. So they talk of things like 'India Shining' which I will never because I meet you everyday and understand your suffering.”

“India Shining” was the campaign slogan from the BJP-led National Democratic Alliance in the 2004 elections. The coalition got off to a strong start in the polls but performed poorly in the main event. The “India Shining” concept has been blamed for that defeat because it focused too strongly on urban development and not enough on rural India.

Modi is running for prime minister on a reputation as an honest, effective reformer with a track record of economic success and protection of women in Gujarat. His pro-business, anti-corruption platform resonates with moneyed, urban elites along with Western economic analysts and business leaders while his fiery, populist campaign speeches have rallied huge crowds in rural areas. And his meticulously coordinated online campaign has appealed to many of India’s more than 100 million young, first-time voters.

On the campaign trail, Modi has attempted to shift the conversation away from the riots and toward economic development, presenting the Gujarat model as a kind of salve.

“Ten years ago, in Gujarat, there used to be many riots,” Modi told a rally in Meerut in February.

However, rights advocates say the brand of high-velocity corporate development Modi advocates has left behind swaths of poor Indians across the country. Modi’s Hindu nationalist project, they say, aims to push ahead privatized development while channeling the anger of the disenfranchised through religious conflict.

“Demonization and stigmatization is on the rise,” said Irfan Engineer, director of the Center for Study of Society and Secularism which documents rising communal violence across the country and works to counter the rise of Hindu nationalism, also known as Hindutva.

Violent conflict between Hindus and Muslims has marked India’s history since its birth narrative. After the British empire’s 1947 partition of the land into what are roughly modern-day India and Pakistan, more than 14 million people migrated to find their places in the new order. It was one of the largest mass migrations in history. But in the absence of law and order, at least 500,000 people died due to violence and hardships of travel.

Out of that bloody maelstrom came a fiercer strain of Hindu nationalism that led to, among other things, the assassination of Mahatma Gandhi in 1948 by a nationalist named Nathuram Godse.

Yet for most of the 900 million Hindus in India, religious practice remains comfortably woven into day-to-day life. It is visible in homes and at roadside shrines where pujas,including fruits, sweets and incense are offered for preferred deities.

And it is there in the figurines of the monkey-like Hindu god Hanuman that dangle from the rear-view mirrors of taxis. And it’s there in the bindis and tilakas worn on foreheads to signify devotion. But that is only part of this country’s landscape of faith.

Hindus represent about 80 percent of the country, but Muslims represent 13 percent with an estimated 300,000 active mosques standing across the country. Islam, like Sikhism, Christianity, Buddhism, Zoroastrianism, Jainism and other expressions of faith are part of life in the world’s second most populous country and tenth-largest economy.

Though India’s constitution declares the country to be both “secular” and “socialist,” religious violence involving Hindus, Muslims, Sikhs and Christians has been a persistent part of the national struggle including huge anti-Sikh pogroms in 1984 following the assassination of Indira Gandhi. There have also been killings of Hindus in contested Kashmir and anti-Muslim riots in 1992 that killed thousands and displaced many more.

And since the Indian government embarked on a program of economic liberalization in the 1990s, the country has become decidedly less socialist and more capitalist. That capitalist leaning has opened the door to billions of dollars in foreign investment, growing the private sector while pushing up the annual growth rate. But this growth has been wildly uneven.

Playing off that rising inequality, BJP leaders like Mumbai chief Ashish Shelar speak highly of social programs that empower low-caste Indians and religious minorities but caution against “appeasement” — a term that has been used synonymously with “pandering” but also to connote sympathy for Islamic terrorism.

Shelar, 41, dressed in a customary white dress shirt and blue jeans in his almost comically small office at the party headquarters, manages a district that includes the airport, prosperous neighborhoods like Bandra and some of the most destitute slums in the country. Shelar’s staff said the district represents a “microcosm of India.”

“This is an anti-incumbency movement,” Shelar pronounces, referring to the Congress Party, the left-leaning party which calls itself the largest democratic party in the world. “Congress has always done the policies of appeasement. They have created this sense of fear among religious minorities.”

“Our Hindutva is primarily based on humanism,” he continued, an idea also conveyed by a number of other Hindu nationalists interviewed by GlobalPost. But asked specifically about religious minorities, Shelar’s tone hardened along with his rhetoric.

“Christians are a peace-loving people,” he said. “In percentages, Muslims are less peace-loving. Yes, Muslims are the aggressors in history. Having a feeling of aggression, like ‘we want to control,’ that feeling comes from Muslims.”

Shelar insisted that he works on behalf of the Muslim constituents who come to his office seeking help with water and sanitation issues, housing, employment and other “slum issues.”

Yet anti-Muslim discrimination here is common, and Muslims are often treated like an “untouchable” caste in matters of housing and employment. Indeed, Muslim Indians face hugely disproportionate levels of unemployment, illiteracy and ill health, who tend to live in more isolated communities or ghettos, sometimes masquerading as Hindus to find work.

Secular voices like Irfan Engineer say the current ‘saffronization’ of India makes it even less likely that election-time promises will be kept. On the contrary, a BJP win would empower the party’s allies, direct more government funding to Hindu temples and programs and reinforce a version of Indian identity that says only Hindus truly belong.

“Right-wing Hindu fundamentalism says Islam and Christianity came from outside the country and their followers can never be loyal,” he said. “They could not dream the glory of the Hindu nation.”

Priyanka Borpujari contributed to this story, which was made possible by a travel grant from International Center for Journalists.