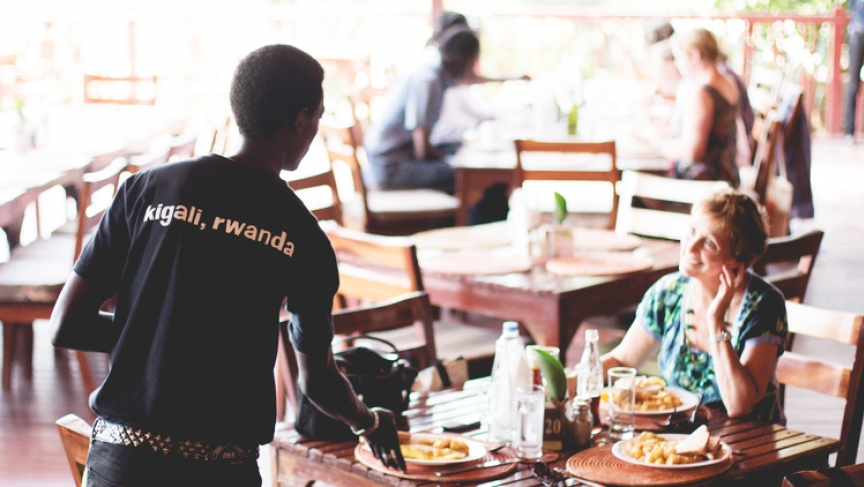 For Josh Ruxin, it wasn't enough to just advise Rwanda after the genocide. The public health entrepreneur moved there and opened a restaurant.

Ruxin is a professor at Columbia University's Mailman Center for Public Health, and in his latest book, "A Thousand Hills to Heaven: Love, Hope and a Restaurant in Rwanda," he explains why he and his wife went to Rwanda to open a restaurant and help the country rebuild. He says it was an adventure that taught them a lot about Rwanda, about the limits of aid and philanthropy, and about themselves.

"We are part of a much bigger family than just ourselves and just our three kids, who are now nearly 7, 5 and 2, and don't really know any other place as home other than Rwanda," says Ruxin. "Heaven Restaurant was our first child, in some sense. We feel the stress that comes from dealing with the grind of daily poverty and how that impacts the people around us who we love, who we care about and with whom we work."

Ruxin says that the horrors of the genocide still permeate daily life. Soon after Ruxin and his wife Alissa moved into their home in Kigali nearly a decade ago, a group of women came to inform them that the body of a young man, who was murdered during the height of the genocide, was buried in their yard.

"We, of course, welcomed them into our home, and a couple of weeks later, they came through and dug up the body, which you would have thought would be an incredibly somber event," he says. "But as it turned out, for that family knowing where their kin was buried, knowing that he was there and knowing that they could give him a proper burial made it a celebration instead of the most somber of affairs. Certainly the genocide does play into our daily life, one way or another."

Ruxin's experience is not isolated — he says he and his family and neighbors regularly find human remains, though not as frequently as before, adding that the local government and community has made a large effort to recover remains and lay them to rest at various memorial sites around Rwanda.

But the real story about Rwanda, Ruxin says, is the progress that Rwanda is making in moving beyond it.

"One of the things that we've really got in our favor is that nearly half of the entire Rwandan population, at this point, was born after the genocide," he says. "The memories of the genocide, while being part of this national dialogue — of course it's there and it's on people's minds — has faded into the past to some degree. Everyone is quite a bit more focused on the future and on getting jobs, on getting education, and on the sorts of normal daily challenges that people all over the world face."

In the face of such a brutal past, it is difficult to imagine how the memories don't overwhelm daily life.

"I've spent a lot of time talking with young people in Kigali today and asking them, 'How is it possible that you can work with people whose parents literally were responsible for the deaths of your parents?'" says Ruxin. "They say, 'We just don't have time. We just don't have time to think about the hatred and to dwell on it. We've got too many other responsibilities — we've got a job by day and we're studying at university by night. There's just not enough time.'"

Ruxin takes his own approach to humanitarian and public health work. Instead of focusing on large scale development based out of the nation's capital, Ruxin believes working in the field makes the most impact, especially when targeting day-to-day problems, like ensuring that nurses are paid.

"Those approaches in our public health work have paid off in spades in terms of the health outcomes people care about," says Ruxin. "But it's not sexy to say we're supporting accounting, we're supporting human resources, and we're making sure there's a good financial plan."

In addition to providing humanitarian aid, Ruxin believes combating poverty also comes through job development, something that he says his restaurant strives to do.

"Our servers are some of the best paid in the entire country, and every one of them has got either a university degree or they are working on a university degree," he says. "They're supporting siblings, they're still supporting orphans of the genocide, but without ever receiving some check from a charity."

While Rwanda undoubtedly has a ways to go, Ruxin says that locals are healing and many are pulling empowerment from the tragedy.

"Today, we shed our tears for the tragedies that continue, and there are many," says Ruxin. "But for us, I think we look at that past and we're inspired. We take a look at Rwanda today 20 years out, and think here's a country that everyone said was going to fail and it's succeeding. We have this unbelievable opportunity to be part of making a contribution to the future, so we feel lucky as can be."

This story is based on an interview from our partner, The Takeaway, the daily show that invites people to be part of the American conversation.