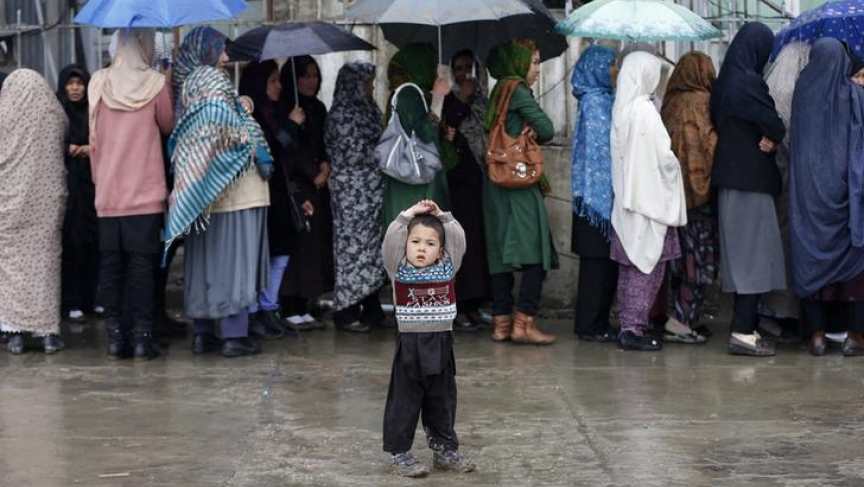 Afghan women stand in line as they wait to vote at a polling station in Kabul April 5, 2014. Voting was largely peaceful in Afghanistan's presidential election on Saturday, with only isolated attacks on polling stations as a country racked by decades of chaos embarked on its first-ever democratic transfer of power.

The threat of violence hung over elections in Afghanistan this past weekend. The Taliban had vowed to derail voting with attacks on polling places. But millions turned out and violence was limited.

"It was a great day. All of my friends who were there describe it as a great turnout," says New York Times reporter Carlotta Gall, who has been covering Afghanistan for the past decade.

"I was there for five days before the election, and the debate, the excitement, the thought of electing a new leader — they've had President Hamid Karzai for 12 years — was definitely exciting for everybody and has motivated voters."

US President Barack Obama passed on his congratulations to Afghans. He called the vote "another important milestone for Afghanistan."

But Gall says it wasn't a violence-free election. "You know 16 police and soldiers were killed on election day around the country." And right before the election, she says there was daily violence in Kabul.  "Every single day but one, we had a suicide attack somewhere in the city. And I counted, in eight days, there were 19 suicide bombers who came into the city to do attacks. One was caught."

In spite of "a really nasty campaign of violence and intimidation from the insurgents," she says "... it was great to see that people could go out and vote and were not so scared that they stayed at home. And even the women coming out was a very good sign."

Gall says the Taliban attempts to disrupt the election were more effective outside the cities, in "the outer regions, in the provinces where the people were too scared to vote, where a lot of the more remote polling stations just couldn't open because of the Taliban threats and intimidation."

And she remains worried about the Taliban's ability to disrupt Afghanistan after the election because "they are coming across from Pakistan where they have their sanctuaries and they're still very well-funded, well-coordinated, they're still recruiting young men, they're still indoctrinating suicide bombers and I've tracked this now for 12 years ... and it’s still going at a high level."
Gall has just written the book, The Wrong Enemy: America in Afghanistan, 2001-2014, where she argues that the US has failed to fully understand and confront Pakistan about its support for terrorism in Afghanistan. "It became clear as I wrote it how much Pakistan was behind this whole insurgency and Pakistan is supposedly an ally of the West ... I had to expose that."
Pakistan, she says, "is still pushing it and sponsoring [insurgents] ... and that's very distressing because, with the foreign troops leaving and Afghanistan left to its own devices more, it's still going to be a very, very tough life for Afghans."

Gall says that officials in Washington, DC don't really get that. She worries that they are still debating the level of Pakistani cooperation with the Taliban and al-Qaeda, though she says there is clear evidence the Pakistanis "were hiding Bin Laden, in fact, and using him for their own policy ... because it’s very clear when you've been reporting on the ground for so long that this is the case."

She says US troops ended up fighting the Taliban in Afghan villages, which weren't where the source of the problem lay. "The source of the problem was across the border in Pakistan. I'm not saying invade Pakistan, but I'm saying there should be a much, much smarter policies not only in America, but in the western world and NATO to deal with this."

"Pakistan is still aiding and abetting militant groups whose ambitions go far beyond Afghanistan — some of them have already gone to Syria and some of them are branching into China. ... For the survival of Afghanistan but perhaps for all of us, we need to tackle that much more intelligently."

All three presidential frontrunners in the Afghan elections this weekend, she says, support signing an agreement to keep US troops in Afghanistan. Gall argues the only real way to ensure stability in Afghanistan is to have peace between Pakistan and Afghanistan.