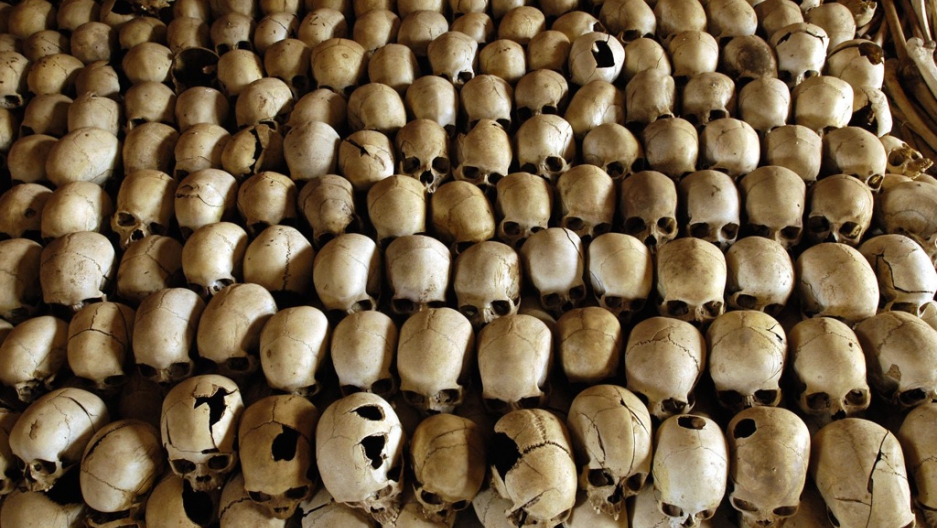 Skulls of victims of the Ntarama massacre during the 1994 genocide are lined in the Genocide Memorial Site church of Ntarama, in Nyamata 27 February 2004. In the Bugesera province, where the small town of Nyamata is located, the 1994 Rwandan genocide was particularly brutal. Among the 59.000 Tutsis who lived in the province, 50.000 were killed during the genocide, and among them 10.000 were slain in the church. AFP PHOTO/GIANLUIGI GUERCIA (Photo credit should read GIANLUIGI GUERCIA/AFP/Getty Images)
Credit: GIANLUIGI GUERCIA
Share

The Rwandan genocide, which began 20 years ago this week, was one of the worst atrocities in living memory. It took just 100 days to massacre as much as 20 percent of the country's population, decimate its infrastructure and sow the seeds of regional conflicts still to come.

Here are 20 photos that tell the story of the events of April to July 1994. Because some things there are no words to describe.

April 6: The plane carrying Rwandan President Juvenal Habyarimana, shown here in 1982, is shot down over Kigali.

Habyarimana and Burundi President Cyprien Ntaryamira, both members of the Hutu ethnic group, are killed along with everyone else onboard.

First political opponents are executed, then security forces and militia systematically murder members of the Tutsi minority, as well as moderate Hutus. This photo, taken on April 11, shows a looter ransacking a house as its occupants lie dead.

April 13: Within days, France and Belgium deploy soldiers to evacuate their nationals.

They do not have orders to protect Rwandan civilians.

More than 30,000, including this man and his son, cross the border into Burundi in less than two weeks.

April 30: More than 8,000 Tutsis take shelter at the Niashishi refugee camp in the south of Rwanda, where French soldiers guard them.

May 12: Security forces, joined by members of the public, continue to massacre Tutsis at a rate of thousands per day.

Women are raped and sexually assaulted as part of the campaign to wipe out the ethnic group.

May 27: Armed rebel group the Rwandan Patriotic Front or RPF, made up chiefly of Tutsi exiles, battles government forces to stop the genocide.

Civilians flee the fighting, like this girl outside Kigali.

The international community resists acknowledging the genocide or any duty to intervene.

May 27: The massacre has made thousands of orphans, including these children seeking refuge at a church in Kabgayi.

In the weeks that follow, thousands of refugees will be killed here, allegedly with the help of clergy themselves.

May 30: By now, militia groups have recruited children to assist the atrocities.

They capture and detain people they accuse of participating in the genocide as they go, including these men in Kabouga.

June 9: RPF fighters, including this boy, battle for control of the capital.

June 11: Under pressure from the RPF, government forces recruit young militiamen to help them fight the rebels.

June 13: The UN, which removed most of its peacekeepers following the deaths of Belgian soldiers at the beginning of the conflict, sends troops to evacuate refugees from Kigali.

Some lucky families are reunited.

When this picture was taken, two days later, the capital was strewn with bodies.

June 22: The UN Security Council approves a proposal by France to send troops to establish a "safe zone" for refugees in southwest Rwanda.

Soldiers from France and several African countries enter the country the next day. "Operation Turquoise," as it is known, proves controversial.

July 17: As the RPF leads its final offensive, hundreds of thousands flee the fighting.

Many find themselves packed into makeshift camps in eastern Zaire (now the Democratic Republic of Congo).

July 17: At least 100 people are trampled in the rush to escape across the border.

By now, President Clinton has described the genocide as the "worst humanitarian crisis in a generation."

July 18: By mid-July, the RPF and its commander, Paul Kagame (pictured in Kigali on July 20), are claiming victory.

The government flees into Zaire.

Afterward: The RPF forms a coalition government and bans all forms of ethnic discrimination.

But many people, including Hutus who fear retribution attacks, remain too scared to stay in Rwanda. The genocide leaves behind it hundreds of thousands of refugees, widows, orphans and people infected with HIV, as well as structural and economic devastation. Some sites where massacres took place, like this church in Nyamata, are turned into memorials to the estimated 800,000 people killed.