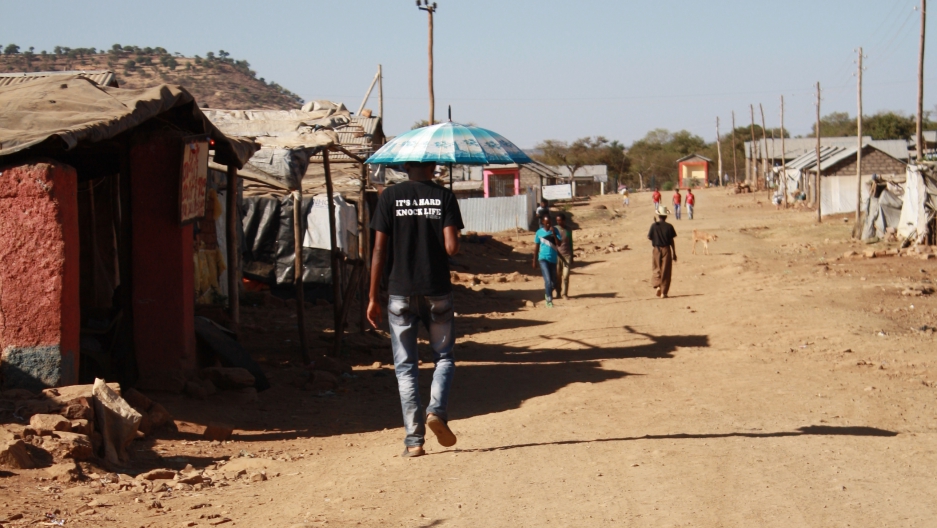 ADDIS ABABA, Ethiopia — Walking along the roads of Mebrat Hail in the suburbs of Addis Ababa does not feel the same as it did two months ago.

About half of the Eritrean refugees who lived through the winter in the neighborhood’s immense condominiums departed for Sudan during February — the next leg of their journey as they wend their way northwest in the hope of eventually reaching Europe.

March is the right month, according to popular wisdom around here, to start the journey from Sudan's capital Khartoum to Libya. The Sahara desert is not too hot and the waters of the Mediterranean Sea will be calmer by April than they have been during the winter.

Timing is essential for this multinational trek due to the risks. Even if refugees avoid the smugglers who want to sell them to organ traffickers, they could die of thirst while crossing the desert, or storms could destroy their boats at sea.

Last year Europe received around 484,600 asylum applications, according to the United Nations Humanitarian Commission on Refugees (UNHCR). Among those, 21,293 were Eritrean refugees, the majority of whom had arrived by boat from Libya to Italy.

The tragedy in which 366 Eritrean migrants drowned in a boat off the coast of the Italian island of Lampedusa last October is still raw in the minds of many people who lost friends and relatives. But this will not stop other refugees from making the same journey.

For the last decade a continuous flow of people have left Eritrea, unable to bear life in what they describe as a prison state. Eritrea has not held free elections since 1993 when Eritreans voted for independence from Ethiopia after a 30-year-long struggle. After a few years of peace, in 1998 a war broke out between Eritrea and Ethiopia that lasted two years. Ever since then the entire population has been fully militarized.

Young men with low education levels have the least chance of being released from endless military service.  Those with better education have to work for the government for $15 a month after completing military training. Daily life is a survival struggle for families without relatives abroad sending remittances. Escaping to Europe offers both the promise of a better life and the ability to support loved ones back home.

This year the route through Libya is “open”: after the fall of the Gaddafi regime that used to restrict the access to the coast and the stall of the open civil war in Libya, refugees know that crossing is easier now, and smugglers are ready to respond to customers’ demands.

UNHCR does not know how many people are on the way, but the smugglers have done their calculations.

“There are 13,000 Eritreans ready to cross the Mediterranean as soon as the waters calm down,” says Tsegay, an Eritrean smuggler who allowed me to interview him.

Tsegay attempts to get refugees from Ethiopia to Libya. In order to succeed in his mission, he needs a strong network of collaborators and many contacts along the way to Libya. Through this network, he says, he receives information about the flow of refugees on the route to Europe.

International media reported 4,000 refugees reached the Italian coast in March, many of whom were Eritreans who had started their journeys in Addis.

Here in Mebrat Hail in the evenings, refugees run to internet cafes for prearranged Skype calls with relatives and friends who have reached Sudan, where they rest before moving on. Some have even reached Europe, as planned.

“Hey man, how is Rome? Is it true that our Asmara is a little Rome?” Girmay asks his friend, Seare, who left the Eritrean capital, Asmara, reached Italy, and is now heading to Norway.

Twenty-seven-year-old Girmay has an uncle in Canada. He decided to stay in Addis as he hopes the uncle will provide a sponsored visa to Canada.

Many Eritrean refugees still in Addis have made a similarly hopeful choice, even though few are supported by the urban refugee UN program, which allows refugees considered as vulnerable for humanitarian or health reasons to live outside camps supported by small monthly allowances. Some of the refugees have been here for several years.

Most who can afford to live in the city have relatives abroad who send money until their visas are ready.

Although not allowed to work in Ethiopia, many of the Eritreans do not like depending on others and want to support themselves while they wait in what they refer to as “the Ethiopian limbo.” Some find jobs in the black market as mechanics and builders, others set up irregular small businesses like pool houses and internet points.

Escaping “the Ethiopian limbo” legally is rare — the majority of Eritreans face being stuck in Addis or the refugee camps of Tigray in northern Ethiopia, an option many can’t bear.

“I cannot wait for UNHCR to remember my case,” says Jeremiah, a 28-year-old Eritrean refugee stuck in Addis Ababa for three years. “There is no hope for me if I keep waiting here.”

Jeremiah is a former economics student and left Eritrea because of the lack of opportunities and freedom. Now his biggest fear is wasting his time in Ethiopia without being able to build a future for himself and his family.

There are countless others like him who have little chance of being legally resettled from Ethiopia through the UN program. For these young refugees the way through Libya to Europe becomes a very reasonable option.

The May Aini, Adi Harush and Hitsats refugee camps, located in the northwest of Ethiopia’s Tigray region, close to the borders with Eritrea and Sudan are some of the largest refugee camps in the country.

Young men — typically between 20 and 35 years of age — are the camps’ largest demographic, although there is a growing percentage of unaccompanied children who cross the border to Ethiopia.

Most of these children grew up in the border areas; some crossed the border accidentally but once in Ethiopia can’t return; others were sent across by their families in the hope that relatives abroad will take them and give them better futures than those they can have in Eritrea.

May Aini and Adi Harush are older camps, established between 2008 and 2010, and have reasonable infrastructures and services: Many houses are made of brick, clinics and schools are available, and various organizations work hard to provide recreation activities and vocational training.

The barber shop in the May Aini refugee camp in Tigray, Ethiopia (Milena Belloni)

Loud Tigrigna music accompanied my walks along the dusty roads of Adi Harush when I visited in December 2013 before the migration toward Europe started.

During 2013 and into 2014, refugee arrivals increased so rapidly — up to 1,000 people a week came during February 2014 — that Ethiopian authorities had to open a new camp, Hitsats, around 60 miles north of Adi Harush.

Large UNICEF tents cover the ground, each hosting at least four people. When there aren’t enough tents refugees are sent to a common tin-roof building where everyone sleeps on the ground trying to ignore the stifling heat.

Living confined in the camps, while dreams and plans for the future wither, is perceived by many young refugees as being like a slow death.

“Wey keb wey geb! We will have all or nothing!” 29-year-old Haile exclaimed in Tigrigna, while we sipped cups of tea among other refugees in his small brick house in Adi Harush. “It is better to die in the sea rather than wasting our youth in a camp.”

All those who can, try to obtain permission to relocate to Addis Ababa. Or they strike deals with smugglers to escape the camps and reach destinations further afield.

“There are trucks picking up people in the night,” says Yohannes, a refugee who has lived for two years in Adi Harush.

Those without enough money to pay for the journey — $3,000 to go from Ethiopia to Libya — beg smugglers to reduce the cost.

Others who have families abroad that are not willing to bear responsibility for such a hazardous journey assure the smugglers their families will pay once they reach Libya. At that point the family will have no choice but to pay.

Haile has already tried to reach Europe. The first time he and a group of others were kidnapped by bandits. Kidnappers typically offer families a choice: pay the ransom or their loved one’s internal organs will be harvested and sold.

Profit maximization is all that matters: If people are not worth anything while alive, they can be worth something when dead.

Haile was tortured in the Sinai until his family in Eritrea collected enough money to pay his ransom of $2,500.

Those whose families could not pay were killed.

But Haile is determined to try again.

“My life is in the hands of God,” he said. “If have to die I will die, but I have wasted enough time in this camp.”

Another motivation for making the hazardous journey lies with those left behind.

“We have not left our country only to save our lives but also to save the lives of our families in Eritrea,” Haile said.

Haile and others are under great pressure to make it to Europe or North America so that they can send money back to loved ones struggling to scrape by. Reaching the camps here in Ethiopia is not enough.

Ethiopia hosts about 407,646 refugees from other countries as well, mostly from Somalia and South Sudan.

Some have lived in camps for more than 15 years without the chance of local integration, resettlement or being able to return to homes in countries wracked by endless wars and extreme poverty.

In 2012 less than 0.3 percent of refugees worldwide were admitted to resettlement countries, mainly US and Canada, according to UNHCR, and able to win freedom through the salvation of legal immigration papers.

Many of the Eritreans in these camps aren’t willing to accept such odds. If the international asylum system won’t give them a chance, they will create it for themselves.

Even if that means risking their lives to traverse the Sahara and the Mediterranean Sea.

“Wey keb wey geb! All or nothing!”