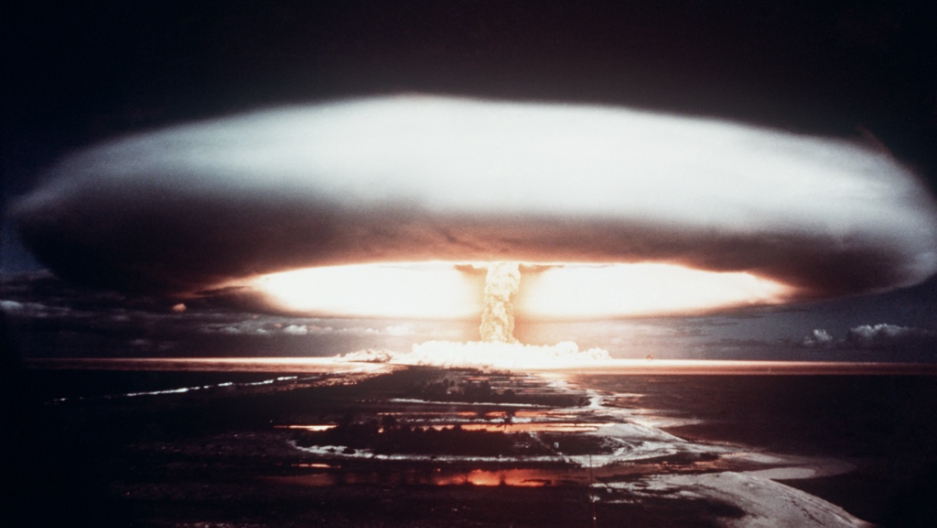 Lurking behind the debate over what to do about Russia’s land grab in Crimea are 3,750 good reasons to speak softly.

Yes, strategic nuclear weapons — 1,800 of them in the Russian arsenal, about 1,950 belonging to the United States, according to the Federation of American Scientists — along with the ballistic missiles, nuclear submarines and intercontinental strategic bombers that carry them, are suddenly demanding renewed attention.

The world has enjoyed a 24-year quasi-hiatus from the sinister logic of the nuclear age. Ever since the Soviet Union collapsed in 1992 and major cutbacks in the massive, planet-destroying arsenals of the Cold War began, the specter of a nuclear exchange between the world’s rival superpowers has receded from the collective psyche.

In that time, nuclear weapons have gone from a national security strategy centerpiece in Washington and Moscow to something of a nuisance. As late as September, before Moscow annexed the Ukrainian peninsula Crimea, the US Congressional Research Service was touting the likelihood that new unilateral disarmament moves by the US could reduce current stockpiles even further to below 1,000 each within the decade.

The friction over Russia’s absorption of Ukraine looks unlikely to develop into a shooting war, but one casualty may well be the overall decline in nuclear weapons held by the two Cold War giants. US conservatives, primarily Republicans, had already grown skeptical of more cuts, greeting a speech by President Barack Obama in Berlin last summer as the last straw.

“Peace with justice means pursuing the security of a world without nuclear weapons, no matter how distant that dream may be,” Obama told a crowd at the Brandenburg Gate.

The Air Force, the primary custodian of US nuclear warheads, had almost given up the argument against further cuts, stressing instead the need to modernize the nuclear force within existing limits.

But the Crimea crisis may have changed that dynamic. Loren Thompson, a military analyst who leads the Lexington Institute, argues that Putin has single-handedly rescued the US nuclear deterrent from further reductions — and saved the revenue stream of dozens of defense contractors hired to maintain, modernize and secure the existing force.

“It doesn’t take a genius to figure out where this debate will end up in Washington: the delicate balance of terror — the nuclear balance — is back on the table as an active concern,” Thompson wrote in his blog on Forbes.com.

For those who came of age during since the 1992 collapse of the Soviet empire, that may require a bit of adjustment. For one thing, the whole lexicon of nuclear warfare — MAD, MIRV, throw weights, first strike capabilities — needs dusting off.

Start with MAD: mutually assured destruction. It means maintaining a large-enough nuclear force with which to retaliate after a surprise attack so that the mutual carnage a first strike would entail guarantees no one would be crazy enough to order one.

The concept of a first strike — or fear of it — spurred a huge nuclear arms race during the Cold War, first involving atomic bombs and long-range strategic bombers, then nuclear-tipped ballistic missiles housed in hardened silos in remote areas of the US and Soviet Union. The final evolution of those weapons was the nuclear-powered missile-carrying submarine (SSBN) armed with multiple independent re-entry vehicles, or MIRV warheads.

In effect, these giants, which still ply the world’s oceans, can lurk undetected a few hundred miles off the US East Coast and obliterate the country’s most populated area before anything could be done to prevent it. Some carry as many as 24 nuclear missiles — each one of them with as many as four warheads that could fly to four different cities.

The math, as Thompson says above, doesn’t take a genius. Just one of America’s 14 SSBNs — “boomers” in Navy parlance — or Russia’s eight could destroy America's entire urban population. Russia launched its latest such submarine on Jan. 2.

Of course, viewed in hindsight (and notwithstanding the enormous “opportunity cost” of spending tens of billions of dollars on such weapons instead of, say, educating our children), MAD did have its silver lining.

Proponents point out that in spite of almost incessant proxy wars during the long period after World War II, Armageddon was avoided largely because both sides accepted the logic of MAD.

It did not prevent them from facing off indirectly elsewhere — over Korea, Vietnam, in numerous Middle Eastern, African and Central American conflicts of varying intensity, the 1979 Soviet invasion of Afghanistan, and the Cuban missile crisis. But ultimately, in spite of it all, the big nuclear exchange never happened.

So far, there is precious little acknowledgement of this dynamic at play in the Crimea crisis — but it surely is making itself felt. While politicians, particularly those prone to portray Obama as a dupe in international affairs, in opposition, have the right and luxury of demanding a “military option,” the idea that either NATO or Russia has such options in the classic sense — i.e. war — is nonsense.

Even in the darkest days of the Cold War, hawkish leaders like Khrushchev and Kennedy, Nixon and Brezhnev, Reagan and Andropov, shrank from direct military confrontation when it came to international crises. The order of the day was feint and rhetoric, none of which ever came directly to superpower blows.

In Berlin 1948, Hungary in 1956, the Cuban missile standoff of 1961, Prague in 1968, and through a variety of Arab-Israeli wars that pitted Soviet-backed Arab regimes against western-armed Israel, the brink was hinted at but never crossed. Both sides, it seemed, knew better.

But what if Putin is crazy? today’s hawks ask.

That’s always been the rub. But as that great statesman Sting sang in a different era, “What might save us, me, and you. Is if the Russians love their children too.”