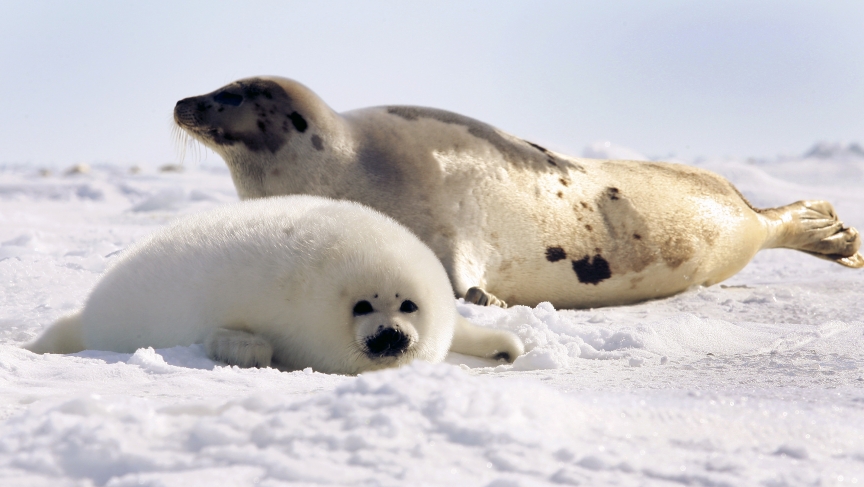 Harp seal pup lies in front of its mother on an ice floe in the Gulf of St. Lawrence, Canada.

It's not just a selfie - it's a sealfie.

Canadian Inuit have been posting pictures on Twitter of themselves wearing seal skin clothing, or posing next to freshly hunted seals using the hashtag #sealfie.

The campaign is in response to Ellen DeGeneres and her now famous "selfie" during the Academy Awards. DeGeneres revealed the photo of Hollywood stars raised $1.5 million for the Humane Society of the United States. The Humane Society opposes the commercial seal hunt.

On March 28, Inuit musician and throat singer Tanya Tagaq posted this tweet which shows her baby beside a dead adult seal near her home town of Cambridge Bay, Nunavut.

@TheEllenShow our seal hunt is wholesome. We respect seals. They get to live free. Slaughterhouses are nightmares pic.twitter.com/acI6iivfP0

"For us, the way we've grown up there, we're used to our meat actually coming from somewhere," said Tagaq. "It's not just from a package in the grocery store. It just doesn't appear in front of you in a restaurant so for us that wasn't shocking at all. It was actually received in the Inuit community as being really cute."

Tagaq said she was shocked by the reaction to the photo.

@KentDriscoll @dulcielynn @tagaq ..Sure IS ignorant, not 2 mention COWARDLY 2 bludgeon a baby seal then lay a baby NEXT 2 it's beaten body

Tagaq explained that she took the photo to educate people about the importance seals play in the life and culture of Inuits.

"We wouldn't be here without seals. We'd be dead. We'd die without the animals up there. We are not living off the land, we are living on the land we are part of it."

"I do not support anyone killing anything for sport or just for the fur. I don't think that's right.

According the Canadian Department for Fisheries and Oceans, approximately 94,000 harp seals were harvested during the commercial seal hunt last year. The Inuit seal hunters killed fewer than 1,000 harp seals.